“Bond king” Bill Gross is heading to court in California over his music-playing habits — again.

Orange County Superior Court Judge Kimberly Knill ordered the billionaire to show up in court July 28 for a contempt hearing, after his Laguna Beach neighbour Mark Towfiq complained Gross had violated her order to keep the music down.

Gross and Towfiq, a millionaire, both have trophy homes on a bluff overlooking the Pacific Ocean. But they have feuded since Towfiq complained about netting over a million-dollar piece of art in Gross’s yard. According to Towfiq, the Pimco co-founder responded by blaring TV sitcom themes, including “Gilligan’s Island,” at all hours of the day. 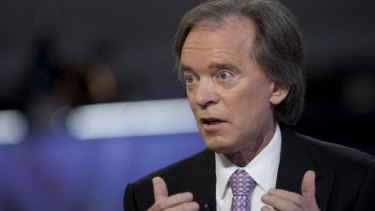 Bond billionaire Bill Gross has been accused of harassing his neighbour with the “Gilligan’s Island” theme music.Credit:Bloomberg

After a trial that featured nine days of testimony, Knill ruled that what Gross did amounted to harassment. She ordered him to stop playing loud music in his yard when he or his wife weren’t outside and to keep at least 4.5 metres away from their neighbours.

But according to a recent complaint filed by Towfiq, Gross violated the order on July 7, prompting an angry response from Gross’s lawyer, Jill Basinger.

“This latest filing by Mr Towfiq is as outrageous as it is legally dubious,” she said. “He is now using a previous restraining order not to ensure his freedom from harassment, but as a weapon in his perverse obsession with the Grosses.” 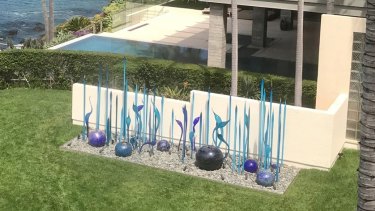 The sculpture in Bill Gross’ garden.Credit:Bill Gross and Amy Schwartz

In a recent affidavit answering Towfiq’s complaint, Gross said he and Amy Schwartz, whom he married in April, turned on music “at a quiet level” while swimming after 9 pm on July 7. Gross said he only used “small personal speakers.”

Towfiq called the police though. Laguna Beach police officers came and left without issuing a citation, Gross said, according to court papers.

Towfiq’s lawyers then complained to Gross’s legal team about umbrellas that were put up on his property, according to a copy of an email chain the two sides exchanged.

Gross’s lawyers accused Towfiq of attempting to punish the Grosses for “daring to enjoy music while swimming” by asking the judge to ban the umbrellas.

“This is not because the umbrellas contain speakers or other amplifiers, but supposedly because they are somehow ‘harassing and intimidating,’” Gross’s lawyers said.

A lawyer for Towfiq didn’t immediately return a call or email seeking comment.

Towfiq testified last year that while the neighbours initially appeared to get along their relationship soured after the billionaire put a net over a 6.70-metre-long blown glass sculpture by artist Dale Chihuly. Towfiq filed a complaint with Laguna Beach officials. Gross’s lawyers say Laguna Beach has since approved the installation of the sculpture.