London (CNN Business)Boeing has spent years trying to assure customers, regulators and the public that its planes are safe. That job may have just gotten harder.

What’s happening: Airlines in the United States, South Korea and Japan have grounded dozens of Boeing 777 aircraft after one of the jets suffered engine failure Saturday, sending debris crashing down over Denver.
Boeing (BA) on Sunday recommended that airlines stop flying versions of the aircraft that are equipped with Pratt & Whitney 4000-112 engines while US authorities investigate the Denver incident. Of those, 69 had been in service and 59 are in storage, the plane maker said.

Shares of the company are down 3% in premarket trading after they rallied 4.3% on Friday.
Boeing, a giant of American industry, was once seen as a safe bet for investors who believed in the strength of the US economy.

But the jet maker has struggled since the grounding of its 737 Max plane in March 2019 following two crashes that killed 346 people. The US Federal Aviation Administration didn’t lift the restrictions until November of last year.
That sent Boeing, which has also been hit by a plunge in air travel from the pandemic, to a record loss of nearly $12 billion in 2020.
CEO Dave Calhoun had warned that the coming months would still be difficult. In January, the company said it would delay the first delivery of its newest jet, the 777X, back to 2023. The long-range plane was designed to be used mostly on international travel.
Downsizing is also set to continue. Boeing expects to reduce staff to 130,000 by the end of 2021, down from 161,000 at the start of 2020.
Before this past weekend, there were signs that the company was finally finding its footing. Boeing delivered 26 jets in January, helping to ease a backlog of more than 400 737 Max jets that were built but couldn’t be delivered during the 20-month grounding. The company gets most of its money from plane sales at the time of delivery.
But the latest crisis, which comes at a moment when Boeing desperately needs to rebuild trust, could blunt this momentum.
Investor insight: Shares of Boeing have rebounded 129% from their recent March low, outperforming rival Airbus (EADSF), but remain 48% below where they stood two years ago. The company’s stock price makes clear that Boeing is still reeling from the 737 Max saga and coronavirus. Adding another problem to the mix won’t help.

Copper prices are soaring. That’s good news for the recovery

Copper prices have climbed to their highest level in nearly a decade as investors gear up for rising demand for construction projects once the pandemic is brought under control. 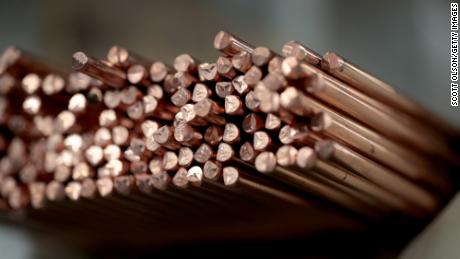 On Friday, the price of copper climbed above $4 per pound for the first time since September 2011, my CNN Business colleague Anneken Tappe reports. It continued to advance Monday.
Why copper? The metal is used in many construction materials, including electrical wires and water pipes. The uptick in prices has been driven by optimism that strong demand will outpace supply, creating a large deficit.
The strength of China’s economy remains a crucial factor.
“China’s return from the [Lunar New Year] holiday has heralded a burst of onshore investor copper buying,” Goldman Sachs metals strategist Nicholas Snowdon said in a recent note to clients.
China’s economy grew 2.3% in 2020 while most other countries saw output shrink dramatically. It’s due to play a central role in powering the recovery expected this year.
Snowdon said the outlook for copper is “extremely bullish” as the economic situation in other countries starts to improve, too.
“The key reason the copper market is evolving in such a tight direction is in our view due to the very strong demand conditions both onshore in China as well as now in key Western markets,” he said.

The iPhone just had a huge quarter

Surging iPhone sales in the final three months of 2020 pushed Apple ahead of Samsung as the world’s biggest smartphone maker, my CNN Business colleague Hanna Ziady reports.
The launch of the 5G iPhone 12 series propelled Apple to the number one position in the fourth quarter, Gartner said Monday. The last time Apple was the top smartphone vendor was in the fourth quarter of 2016, according to Gartner’s data, which tracks sales to consumers.
Apple (AAPL), which launched its 5G line-up in mid-October, sold 80 million smartphones in the final three months of 2020, a 15% increase on the same period the previous year.
The backstory: The final three months of the year are often Apple’s strongest because it typically unveils new iPhones in September. Last year, the reveal was delayed as a result of supply chain disruptions. (Samsung (SSNLF) usually updates its flagship Galaxy S phones in February, contributing to a much stronger first quarter performance. This year, the company announced new models a month early.)
The Gartner data is a positive sign for analysts who have predicted that Apple is on the cusp of a sales “super cycle” as millions of customers upgrade their phones for the 5G era.
Investor insight: Those expectations are a big reason shares are up 60% in the past year and reached an all-time high late last month. Apple is trying to broaden out its business, focusing on new services like Apple TV+. But iPhone sales have remained hugely important.

Grave of slain 'Everything will be OK' protester disturbed in Myanmar