Troubled wealth giant AMP's has reported double-digit losses across all four of the company's divisions for the half-year as chief executive Francesco De Ferrari acknowledges the company has a culture problem.

Despite the losses, AMP defied market expectations deciding to pay shareholders a fully franked special dividend of 10¢ a share. However, it said this meant the board did not expect to pay a final dividend for FY20.

The wealth giant also confirmed its underlying profit had more than halved to $149 million, compared to $309 million reported in the same period last year, as a result of the volatility brought on by the coronavirus crisis. 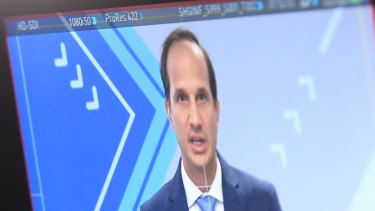 Francesco De Ferrari says there is work to do to improve AMP’s culture. Credit:Peter Braig

AMP Australia, the entity that oversees the wealth management and AMP Bank, reported operating earnings of $59 million, 42 per cent less than the same time last year. The group said it felt the impact of the federal government's early access scheme to superannuation, which cost at least $900 million. Assets under management slumped by 10 per cent to $121 billion, partly due to pandemic-induced investment market volatility.

AMP Australia’s chief executive Alex Wade stepped down suddenly without explanation last week after only 10 months in the job amid allegations of misconduct. The resignation prompted former AMP chair Catherine Brenner to say the wealth manager needed to improve its culture.

Mr De Ferrari did not comment on the scandals engulfing the bank directly, but acknowledged there was work to do to improve AMP's culture.

"Driving cultural change is key to unlocking AMP’s potential and driving shareholder value. We’ve made progress in strengthening accountability and execution, but know we have more to do," he said in a statement.

"To accelerate change, we’ve implemented a number of immediate actions including establishing a board culture working group and an employee-led inclusion taskforce, as well as working with an external expert to drive inclusive leadership."

The investment division, AMP Capital, was also plagued by a scandal last month after it was revealed the newly appointed chief executive Boe Pahari was promoted to the top role after being fined $500,000 for sexually harassing a former colleague.

AMP Capital's operating performance fell to $72 million from $120 million in the prior-year period as a result of a 39 per cent decline in performance and transaction fees due to a slowdown in activity caused by the pandemic.

In some good news for the company, total deposits in AMP Bank increased by $2.6 billion and its residential mortgage book also increased by 2.9 per cent to $20.5 billion. The bank froze home loan repayments for 4700 clients and has set aside $24 million for potential loan defaults related to the COVID-19 downturn.

Mr De Ferrari told investors the pandemic had created challenges, but the sale of AMP Life had been a "major milestone" for the company.

"The proceeds have strengthened our capital position, enabling us to return up to $544 million to our shareholders via a special dividend and a $200 million share buyback, subject to market conditions," he said, adding the outlook remained challenging for AMP.

"With the second wave of COVID-19 impacting the economy here and overseas, we expect conditions to remain challenging. However, we also see opportunities emerging over the longer term as we transform AMP to be a simpler, client-led and growth-oriented business."

One of America’s oldest banks wired over a hundred million dollars in funds linked to the crypto Ponzi scheme OneCoin, according to a trove of...

The adoption of the trading software provided by TraderEvolution continues, with the company revealing this Tuesday that it has secured a deal in the Far...

Mid-August, the controversial Decentralized finance (Defi) project, Yam.finance worked out a rescue plan to settle its investors following the detection of a bug in its...

MEME, a community-driven project inspired by a ConsenSys developer’s satire of the yield farming bubble, has gained nearly 100% in 24-hours to post an all-time...

24 mins ago
We and our partners use cookies on this site to improve our service, perform analytics, personalize advertising, measure advertising performance, and remember website preferences.Ok