Bitcoin (BTC) fell to support which could determine a $30,000 retest on July 13 as bulls failed to make their case for fresh gains. 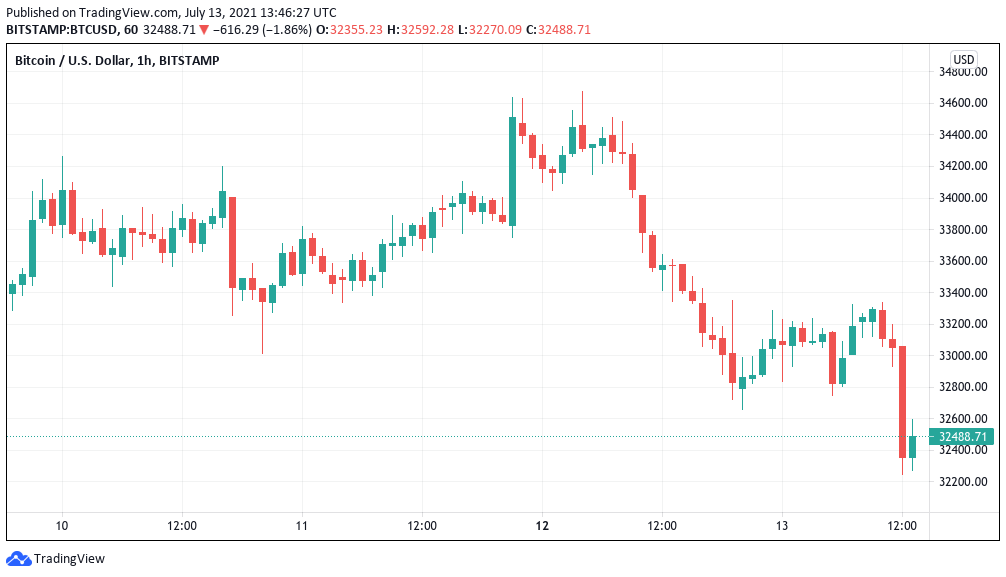 Data from Cointelegraph Markets Pro and TradingView showed another lackluster performance for BTC/USD on Tuesday, with local lows at $32,240 on Bitstamp.

Ranging above $33,000, viewed as the support level to hold as a springboard for bullish continuation, seemed shaky at best this week. Monday saw a brief slip below, with the rebound barely holding out for 18 hours.

At the time of writing, $32,500 formed a focus, with Bitcoin bouncing below levels one trader says are necessary to hold in order to prevent a return to closer to $31,000.

“The critical support that I’ve derived here is the area around $32,600-$32,900, which you preferably want to see sustain as support to avoid another test of the lows,” Michael van de Poppe explained in an update earlier on Tuesday.

With that area missing for now, bearish sentiment looked apt to prevail on lower timeframes.

That said, fundamentals continued to stabilize after seeing local bottoms of their own. The hash rate was above 91 exahashes per second on the day, while difficulty continued to avert a fresh record-breaking drop at this weekend’s readjustment.

Elsewhere, news that BNY Mellon would be providing banking services for a potential Bitcoin exchange-traded fund (ETF) from Grayscale failed to lift the mood.

A United States ETF has yet to get the regulatory go-ahead, with a total of 1 currently under the microscope.

Noting the impact of a U.S. ETF launch on gold in 2005, however, popular Twitter commentator Lark Davis hinted that the direction would be clear.

“It essentially kick started a 7 year bull run,” he summarized.

Tuesday’s forthcoming release of the July consumer price index report, which focuses on inflation, buoyed stocks in contrast to crypto markets. Gold rose in tandem, with XAU/USD up 0.7% at $1,813.