State and federal resources ministers are discussing exempting mine workers from border closures in order to sustain the lucrative industry's economic contributions and support regional communities amid the worsening coronavirus crisis.

As "non-essential" business activities are ground to a halt across the country in an effort to arrest the advance of the pandemic, the $260 billion resources sector so far has been largely spared from restrictions. 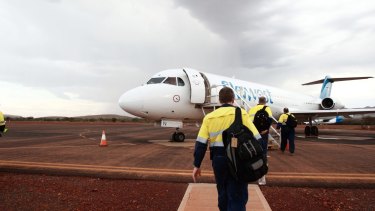 A wave of interstate travel restrictions to curb the spread of coronavirus has complicated the movement of mining companies’ fly-in, fly-out workers.Credit:Louie Douvis

But a phone hook-up between the nation's resources ministers on Tuesday night was expected to discuss formalising mining companies' exemptions from new domestic travel restrictions and setting guidelines to permit the continued flow of fly-in, fly-out (FIFO) workforces to mine sites, industry and government officials told The Age and Sydney Morning Herald.

The resources industry, Australia's largest exporter and a major economic driver, is heavily reliant on FIFO staff especially at remote work sites. As FIFO workers comprise about 10 per cent of BHP, Rio Tinto and Fortescue's Western Australian workforces, decisions by WA, South Australia and other states to impose strict border controls had caused uncertainty across the industry.

The Minerals Council of Australia, representing the mining sector, said miners' priorities amid the coronavirus emergency were protecting the health and safety of workers, supporting communities and ensuring the movement of essential operational staff around the country.

"The sudden shift by different governments in recent days to place restrictions on movement of people across borders prompted the council to accelerate work on the national approach to the safe and efficient passage of essential workers and supplies," chief executive Tania Constable said.

It comes as some of Australia's leading miners including Rio Tinto and South32 have been forced to cut back mining operations overseas due to lockdown efforts aimed at containing the virus. Rio Tinto was preparing to halt all work at its Richards Bay Minerals site in South Africa for 21 days to comply with a government directive.

Mike Henry, the head of mining giant BHP, said government leaders were eager keep the resources sector running, "given the vital role we can play in helping support the economy in these difficult times". Mr Henry said BHP had committed to hiring 1500 workers in coming weeks and establish a $50 million fund for services in regional communities.

"I have recently spoken to senior government officials who have talked about the importance of keeping the resources industry operating," Mr Henry said.

Federal Resources Minister Keith Pitt held a "roundtable" with representatives from mining, oil and gas companies including BHP, Rio Tinto, Woodside, Santos and Shell, before speaking with his state counterparts on Tuesday evening. He said the Morrison government was committed to working with resources companies to ensure they could continue operating under changing circumstances.

"Despite the impact of the coronavirus, resources and energy exports are on track to reach nearly
$300 billion this financial year, surpassing the previous record by $18 billion," Mr Pitt said.

"It's critical that resources operations continue and new projects commence as planned wherever
possible and we are working with resources companies to ensure they can get workers in and out of regional and remote areas in accordance with health and safety requirements."

Despite deteriorating prices for some commodities including oil, Mr Henry said BHP was continuing to sell "all of what we produce", and pointed out prices remained strong for BHP's two biggest export commodities – the steelmaking ingredients of iron ore and coking coal.

Gig employees get a helping hand from old economy

Coronavirus ‘apex’ yet to come despite record deaths — and we aren’t ready, says Cuomo
We and our partners use cookies on this site to improve our service, perform analytics, personalize advertising, measure advertising performance, and remember website preferences.Ok