The number of Americans filing a new claim for unemployment benefits rose unexpectedly back above the one million mark last week, a setback for a struggling US job market crippled by the coronavirus pandemic.

Still, in a sign some rehiring is underway, the rolls of those continuing to receive jobless benefits is slowly declining, the Labor Department reported on Thursday (US time), and other data indicated a recovery from the recession triggered by COVID-19 continues, though at a more fitful pace than earlier. 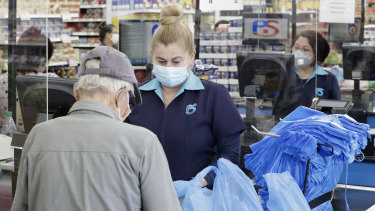 The US jobs market has been battered by the pandemic. Credit:AP

Initial claims for state unemployment benefits rose to a seasonally adjusted 1.106 million for the week ended August 15, from an upwardly revised 971,000 in the prior week. Economists polled by Reuters had forecast 925,000 applications in the latest week.

The previous week's level had marked the first time since March that new claims had registered below 1 million, and had fuelled some optimism that the pace of layoffs would slow further. Last week's reversal soured that, and new weekly claims have been above the 1 million mark for 21 of the last 22 weeks.

"The labour market is a long way from being healthy," Nancy Vanden Houten, lead US economist at Oxford Economics, wrote in a note to clients.

The volatility in benefits activity follows the lapse of an extra $US600 weekly unemployment benefit at the end of July. The enhanced benefit had been in place since the spring under the massive coronavirus stimulus package passed by Congress in late March, but Democrats in Congress and the White House have failed to reach agreement on extending it.

While President Donald Trump has signed an executive order that includes a provision extending the supplement at a reduced rate of $US400 a week, there has been confusion over its implementation.

States are required to cover $US100 of the benefits, but many governors have indicated they don't have the financial capacity after revenues were decimated in the fight against the COVID-19 pandemic. The remaining $US300 will be funded from a limited emergency disaster relief program, which economists estimated could be depleted as early as September.

Oxford's Vanden Houten noted that only seven states have been approved to pay the extra benefits.

New COVID-19 infections continue to spread across the nation, forcing authorities in some of the most afflicted areas to either shut down businesses again or pause reopenings. The newest twist in the path of the outbreak includes the eruption of hot spots associated with some colleges reopening their campuses.

First-time claims peaked at a record 6.867 million in late March.

"Claims are still down 325,000 from the last full week of July," economists at Jefferies said in a note to clients that described the overall increase as "disappointing."

"The next few weeks will be telling in terms of how much of the recent improvement has been fundamental as the Sun Belt has recovered from their COVID surge, or technical as the $US600 benefit expired," the Jefferies economists said.

While new claims are up, the number of people continuing to collect jobless benefits beyond the first week fell to the lowest level since April. So-called continuing claims declined to 14.844 million in the week ending August 8 from a revised 15.480 million in the prior week. Economists polled by Reuters had forecast continued claims at 15 million.

Including those enrolled in the Pandemic Unemployment Assistance program, which provides benefits for those out of work who would not ordinarily qualify for standard state jobless benefits, the total number of people receiving assistance was 28.06 million in the week ended August 1, down roughly 200,000 from the prior week.

Only 9.3 million of the 22 million jobs lost between February and April have been regained so far, and the economy suffered its largest slump since at least the end of World War Two in the second quarter, contracting by nearly 33 per cent at an annualised rate.

Nonetheless, two other reports on Thursday showed a recovery is underway, although the pace has slackened in recent weeks.

The Philadelphia Federal Reserve's manufacturing index showed the pace of activity growth in the mid-Atlantic region slowed for a second straight month in August.

The Philadelphia Fed's business index slid to a reading of 17.2 from 24.1 in July. A reading above zero indicates expansion. Economists polled by Reuters had been looking for a reading of 21.

And the Conference Board's Leading Economic Index rose 1.4 per cent in July, following increases of 3 per cent and 3.1 per cent in June and May, respectively.

"Despite the recent gains in the LEI, which remain fairly broad-based, the initial post-pandemic recovery appears to be losing steam," said Ataman Ozyildirim, the Conference Board's senior director of economic research. "The LEI suggests that the pace of economic growth will weaken substantially during the final months of 2020."

A concise wrap of the day on the markets, breaking business news and expert opinion delivered to your inbox each afternoon. Sign up for the Herald‘s here and The Age‘s here.