It should come as no surprise that the figures from China about coronavirus infections and deaths have been massaged. As the crisis in Xi Jinping's government from his mishandling of the situation mounts, the biggest winner is now becoming clear. It's looking more and more likely that Donald J Trump will win re-election in November – and equity markets love it.

Napoleon said that he'd rather his generals be "lucky" than "good" – and Mr Trump is turning out to be a very lucky general indeed. The coronavirus outbreak has given the US president a "get out of jail free card" when it comes to the phase-one trade deal, signed just a few weeks ago. 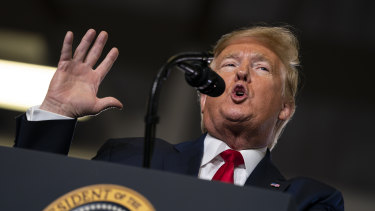 The coronavirus has done something that Donald Trump failed to do with his trade policy – smash supply chains in China.Credit:AP

The preliminary deal was met with much cynicism, as the level of purchases – particularly of agricultural products from his rural base – looked utterly unrealistic. The agreement called for Chinese purchases of US farm goods to increase by $32 billion over two years, or roughly $16 billion a year. When combined with the $24 billion US agricultural export baseline in 2017, the total gets close to $40 billion.

But this was never going to happen. The outbreak of African swine fever in the country's pig population led to mass slaughter of animals on infected farms, so demand for soya beans as feed has plunged. China's output of pork slumped 21.8 per cent year on year in 2019, the lowest level since 2003.

The failure to deliver on a promise to a vital part of his electorate would have been a gift for the Democratic candidate that eventually emerges from the primaries. Now, Mr Trump is in a position to argue that the ships aren't sailing because he is keeping the American population safe from a terrible disease. It also means that Brussels really should start to worry. Mr Trump needs rural voters' backing to secure his second term so, with China unable to buy their farm exports, the rhetoric against Europe's farmers is likely to increase.

The impact of the infection also plays strongly into the Trump "America First" agenda, which is essentially a pledge to deglobalise, because of its impact on supply chains. The current administration wants to stop other countries "stealing" its jobs and repatriate manufacturing. Recent events have highlighted that outsourcing to save costs can sometimes come at a great cost itself.

The shutdown of Chinese businesses and ports in an attempt to prevent the spread of the virus is likely to have a significant impact on companies worldwide – and a long-term rethink of their supply chains, which have become overly reliant on China, is likely. Indeed, the outbreaks have affected major suppliers to US technology companies such as Apple. Foxconn, which assembles iPhones, still has its factories closed in China. This has led some to suggest that the company may have to delay the launch of its next smartphone.

So, coronavirus has done something that Donald Trump failed to do with his trade policy – smash supply chains in China. Over the next year or so, executives at major US businesses will be looking at supply-chain integrity and China will surely be a loser.

Mr Trump needs equity markets to be buoyant between now and November. Of course, the virus could be a threat to this should its spread become more rapid and more serious. However, the situation has shocked Chinese authorities into pouring liquidity into its market – something it had been reticent to do at the end of last year as it focused on clearing up problem debt.

China has pledged measures to support credit, as well as some infrastructure spending. With the Federal Reserve currently hosing money into the repo market, Europe pumping €20 billion a month into financial markets and now a series of dovish moves in China, this should provide some support for equity valuations. It may even convince the Federal Reserve to become more dovish in the next few months – another move that would put a smile on Donald Trump's face.

However, perhaps the biggest long-term implication from recent weeks is that the virus's spread has highlighted the flaws in the Chinese model of governance – for all its people to see. The virus has created the impression officials worry more about pleasing their bosses than they do about taking care of the people.

Political apparatchiks' failure to admit there was a problem at the start of the outbreak in December has resulted in much criticism on Chinese social media. When doctors tried to warn officials that a serious outbreak was possible, they were arrested and charged with spreading rumours. One of these doctors – Li Wenliang – died of the virus himself. This led to calls for more free speech in the country and has seriously dented the authority of President Xi. The potential for social unrest – such as seen in Hong Kong – is real. Should any protests emerge they are likely to be dealt with harshly, which will make the country less attractive as an investment for Western businesses.

Coronavirus has provided the excuse to gloss over the US president's failures while highlighting the benefits of his America First strategy. It has made Beijing's leadership look weak and stirred anger in the Chinese people at the failures in the system. Donald Trump just got really, really lucky.

Boris Johnson urged to appoint a Minister for Older People to end ‘scandalous abuse’
We and our partners use cookies on this site to improve our service, perform analytics, personalize advertising, measure advertising performance, and remember website preferences.Ok