On Wednesday night, a group of about 10 protesters from New York Communities for Change, a grassroots organization, chanted “Wall Street Pete,” while banging pots and pans outside of a fundraiser Buttigieg was attending at the Upper West Side home of tech investor and entrepreneur Kevin Ryan. (The New York Daily News reported that there were about two dozen protesters).

“Wall Street Pete” and “Refund Pete” were both trending on Twitter on Thursday.

Buttigieg’s campaign announced on Monday that it would open closed-door fundraisers to the press and publicly disclose the names of top bundlers, those who organize and collect campaign contributions from other donors, after criticism from 2020 rival Sen. Elizabeth Warren.

Buttigieg mostly dismissed the picketers, joking about their presence, according to a pool report. "Wow, they’re excited,” he said. “One of the things you learn on a deployment is dealing with distracting noises.” 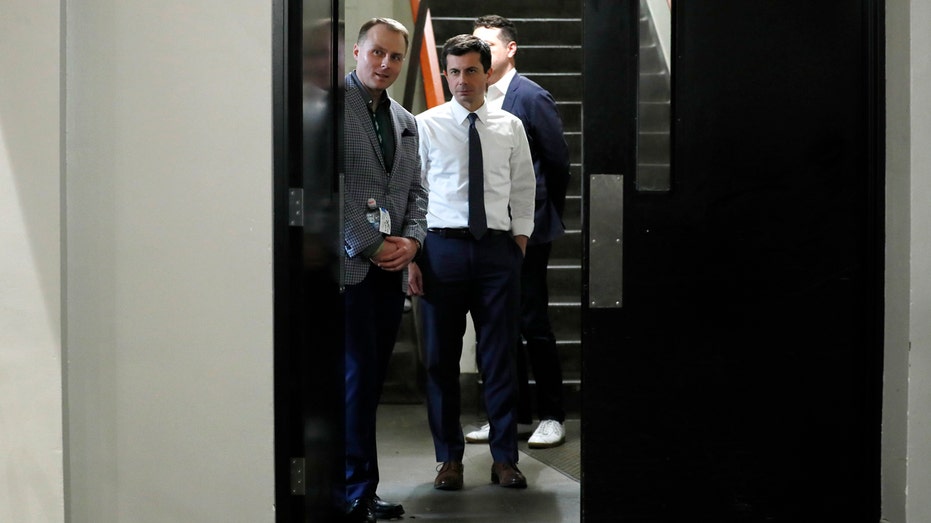 During the event, Buttigieg was asked how he plans to appeal to voters who might otherwise support President Trump. He touted fiscal responsibility and his stance on the national deficit as the reasons.

"It's time for my party to own the issue of fiscal responsibility and deficits," Buttigieg said, according to the pool report. "And we have a pretty good claim on it to begin with, given that every Democratic president in my lifetime, I believe, has led to a lower deficit, and the reverse is true of the other party."

According to an August report from PolitiFact, deficits have shrunk under Democratic presidents and grown under Republicans over the past four decades. However, it's worth noting that presidents alone are not responsible for creating budgets.

After the Ryan event, the 37-year-old headed to the home of Vogue editor Anna Wintour for another fundraiser with leaders in the fashion industry.

At the end of the third quarter, Sanders led the crowded field in fundraising with $25.3 million, according to federal documents. Warren placed second, with $24.6 million, while Buttigieg netted $19.1 million. (During that same time period, Trump’s reelection campaign brought in a staggering $125 million.)

Scarily Accurate Analyst Gives 4 Reasons Why Bitcoin Price Won't Crash at $8,500
We and our partners use cookies on this site to improve our service, perform analytics, personalize advertising, measure advertising performance, and remember website preferences.Ok