After going public on May 2, shares of the plant-based meat company have exploded for a 572% gain, as of Monday’s close. Tuesday’s session brought out the sellers in a big way, but still, Beyond MeatBYND, -21.06% hit the market at $25 and was trading above $132, at last check.

The rally has pushed the company’s market cap above $10 billion, making the stock the most expensive to borrow among active short targets. 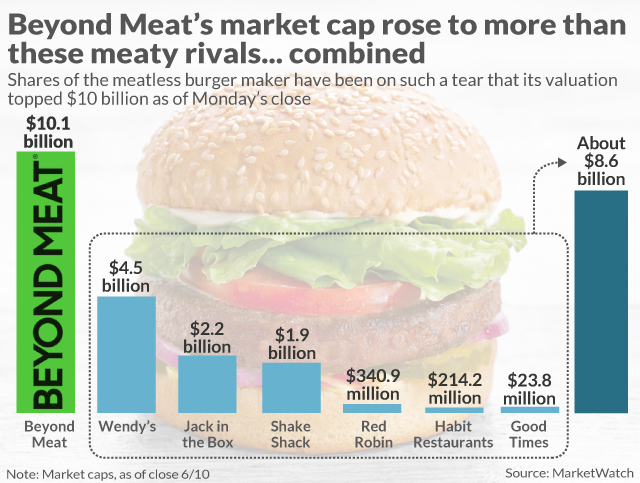 Of course, Beyond Meat has a long way to go to dethrone McDonald’sMCD, +0.69% and its lofty $154-billion market cap. That gap is only widening after J.P. MorganJPM, +0.15% analyst Ken Goldman on Tueseday backed away from his initial bullish call, citing concerns over valuation.

“As we wrote last week — ‘At some point, the extraordinary revenue and profit potential embedded in [Beyond Meat]…will be priced in’ — we think this day has arrived,” Goldman wrote in a note explaining why he believes the risk-reward scenario for investors in the stock is now balanced.

Taking it a step further, Wolf Richter of the Wolf Street blog said Monday’s action — when Beyond Meat approached an $11-billion valuation — provided a candidate for the “pinpoint minute of peak insanity” in this bubbly market.

“This is not some monolithic monopolistic iconic corporation,” he wrote. “It’s a small maker of fake-meat hamburgers and hotdogs with just $40 million in sales and $6.6 million in losses last quarter after 10 years in business — small-company stuff. And it’s competing with a gaggle of other fake-meat hamburger makers.”