2021 has been a thriving year for the crypto community with a lot of positivity surrounding top-performing coins like DOGE. Market pundits believe this positive trend will spill into the coming year, 2022, and Dogecoin may hit a threshold of $1, beating the stiff competition from other thriving coins like Shiba Inu.

DOGE is an altcoin launched in 2013 with the image of a Shiba Inu dog as its logo. Though created as a meme coin, it has experienced rapid growth and a boost in price following increased support from Tesla CEO Elon Musk. Its standing hit the top ten in the crypto ranking this year according to CoinMarketCap and has continued to attain giant strides with Elon Musk recently declaring that DOGE would be the only cryptocurrency accepted by Tesla for its Merchandise.

Over the years, Dogecoin has become one of the most momentous digital assets in the crypto sphere. The year 2021 seems to be the best for DOGE since its launch, its performance has been tremendous. At the beginning of the year, it was trading at $0.005, rose to $0.034 in February, and hit as high as $0.7376 in May. 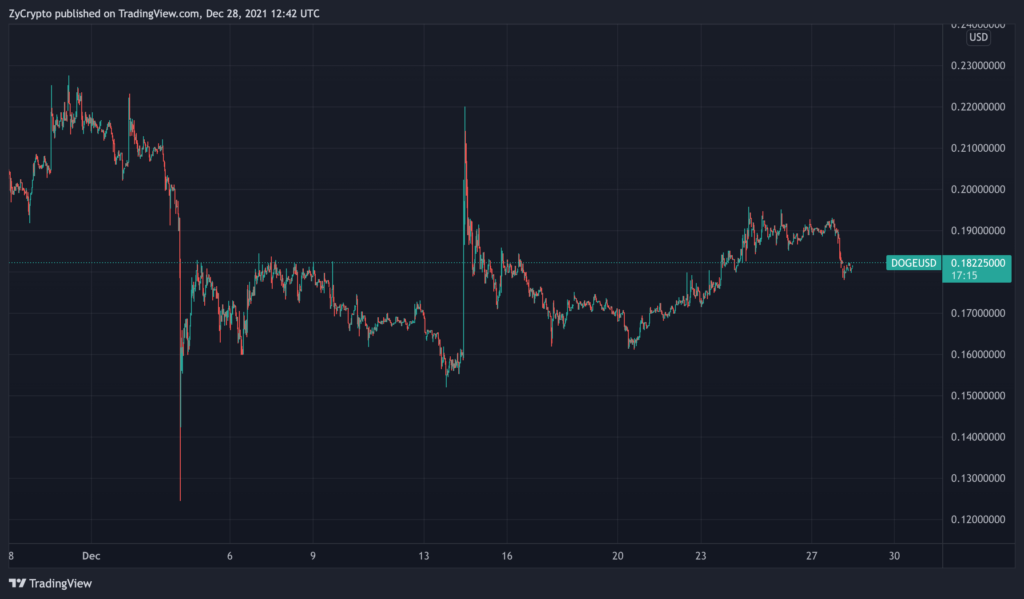 Though the bullish trend didn’t last as the price slipped down over a month. In November, the cryptocurrency was trading around $0.22, losing about 70% of its all-time high in May. At press time, the price is at $0.18 according to CoinMarketCap’s price data.

Despite this downward trend, Dogecoin is up 3100% in 2021 when you compare prices at the beginning of the year, showing a high-profit ratio.

The most influential factor to Dogecoin’s massive gains and high performance was the current bullish trend in the crypto space around Q2. Sequel to the bitcoin halving, the crypto market experienced an upward trend after a short rally in Q3. In Q1, bitcoin made a larger bullish trend, tripling in value, pulling Doge and other altcoins along the upward lane.

Besides Bitcoin support, Dogecoin became a household name, attracting the interest of Key Opinion Leaders (KOL), which expanded its network. Elon Musk, Mark Cuban, and Snoop Dog are some of the major KOLs that impacted DOGE’s expansion, their tweets and sentiments fostered the coin in the gaze of “would-be” crypto enthusiasts and increased its community.

All these influences contributed to an upsurge in Dogecoin’s adoption rate as major companies now accept the cryptocurrency as a payment option. Dallas Mavericks accepted the use of crypto for ticket payments after its owner, Mark Cuban supported Dogecoin as the right coin people should use for payment.

Dogecoin’s fan base has grown exponentially with a Twitter followership of over 2.7 million, other social platforms also show heightened numbers.

Analysts assert that all things being equal, DOGE would be on its way to the $1 price point in 2022, though that feat won’t come easy as Dogecoin has been edged out of the top ten on the market list, a sign other thriving coins may be competing strongly with it in the coming year.