In what appears to be a four-day green streak, Tezos ($XTZ) blazed the DeFi trail with a record new $9.18 ATH, making it the second to make massive gains in a sea of DeFi losses plaguing the top ten DeFis over the last 48 hours. 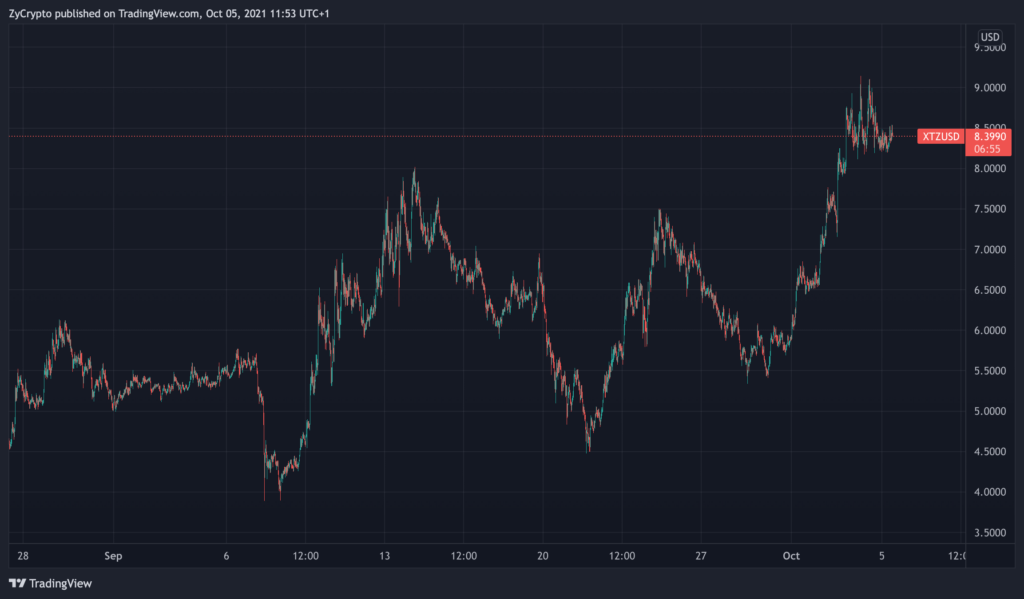 Distantly led by the $47 Terra ($LUNA) which continues to record rich gains since the start of October, Tezos brightly follows from six places behind paced by Uniswap, Avalanche, Chainlink, and Wrapped Bitcoin which occupies second, third, fourth, and fifth position and have all recorded daily losses averaging 3.3%, 4.6%, 2.3%, and 0.7% respectively.

For the project now in its third year, this marks an additional increase of roughly 50% from its $5.95 price level in June. Experts believe the success of the Swiss-based blockchain foundation can be traced to its efficient open-source Proof of Stake (PoS) system that has undergone a series of upgrades, — the latest being the Granada upgrade — cutting transaction time by over 120% and driving down costs and energy consumption to a quarter of its previous levels.

While most PoS mainnet like Ethereum deploy a cumbersome process of test and retest before major upgrades, which is susceptible to hard forks, Tezos is famous for its system of upgrade and improvement that is comparatively easy and less disruptive.

In 2021 alone, it completed three separate series of successful upgrades to its network, attracting a ton of developers and making it one of the most upgraded networks this year.

Tezos boldly touts itself as “an energy-efficient blockchain with a proven track record.” This unique positioning has helped attract interest from institutional investors like Crypto Finance AG, Inacta and Incore Bank also based in Switzerland.

There are plans by these companies to develop a token for the DeFi asset in line with its impressive FA2 standard, and this has the potential to open up XTZ to new frontiers of acceptability.

There is a 6% annual return for investors interested in staking their XTZ DeFis to an external validator. The validator receives a validator commission of profits made and in turn guarantees secure protection of the network throughout the period of staking. There’s a five-week period of waiting for the first digital interest payment after which payments can be expected every 72 hours.

With all the advantages to Tezos, it is undeniable how much value and the potential it possesses, especially in the eyes of investors looking for a source of secure gains.