A pile of large stones sounds like a pretty useless form of money. But in the 17th century, the inhabitants of Yap, a tiny island in the middle of the Pacific Ocean, maintained oral ledgers to keep track of who owned huge hunks of immovable limestone.

The ‘coins’, known as rai, were an ancient analogue to the blockchain. Unfortunately, the system came to a sad end when it was debased. Are there lessons to learn from this fascinating story?

Stones as money, oral ledgers – the forgotten origins of the blockchain

An ancient stone money system existed in the Micronesian island of Yap, where the people would treat large limestone discs as a medium of exchange.

These stone discs, called rai, were considered extremely valuable. The stones were so huge that, given their size, weight, and relative fragility, they were not typically moved after being placed in a location, and if a rai were gifted or exchanged, the new owners of the disc might not even have lived close to it.

At first glance, rai stones don’t exactly seem like the most ideal currency. But the people of Yap maintained an oral ledger that was so effective in keeping track of who owned which stone that the rai was a clear ancient analogue to the blockchain as a record of value.

There are problems with using heavy limestone discs as money. Unlike Bitcoin, they cannot be subdivided, and the computer code of the Bitcoin ledger is more durable than a communal memory.

The community of Bitcoin holders and blockchain deals is also much larger than it was with the people of Yap using rai.

The technology of the rai

There are interesting similarities between distributed ledger cryptocurrencies and the rai. The rai, like Bitcoin, commanded value because of the perceived scarcity.

Just as it requires a vast amount of effort and energy to mine Bitcoin, getting new rai was hard. The limestone discs were quarried from the island Palau, 400km away from the island of Yap and then carried across the seas.

The journey was dangerous, and lives were lost bringing the stones to Yap. This made them scarce and valuable. But the Rai went from being relatively rare on the island of Yap to over 13,000 in 1840.

The maritime skills of the people of Yap were truly impressive. Transporting these heavy stones was incredibly difficult for the time. (But they were significantly less environmentally damaging than the process of mining Bitcoin). 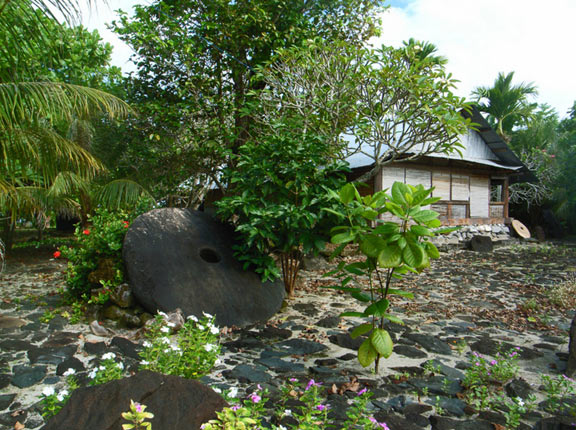 The distributed ledger of the rai

Imagine in the centre of a Yapese village is a pile of huge round rai stones. Let’s say one of the stones belongs to me, and we agreed to make a trade — now the stone belongs to you! But the stone never moved, no unit of currency changed hands.

As the whole village is present at the exchange, everyone now knows and records in the oral ledger that the stone money changed hands and now belongs to you. The system works because everyone believes in it, and it is in everyone’s interest to maintain it.

The rai functioned like money because there was communal trust. Unlike our monetary system, trust underpinning the rai did not operate with a leader or an institution managing and owning the ledger; instead, our financial system requires us to trust the ledger owner and operator.

Everyone in the Yap community needed to trust that everyone else would respect the oral ledger. Nothing was written down. The oral tradition was the only way to record facts and history, and so it had to be maintained and trusted.

The concept of rai’s ancient and abstract stone money system somehow feels strangely modern. Bitcoin also depends on the distributed trust of a crowd. Computer code in a natural form is free from human intervention.

Still, the system only works if people trust in the security of that computer code; for example, in the event of a hack or a shift in norms, Bitcoin would command even less value than the rai does today.

There is no sign that trust in the blockchain, which is the backbone of Bitcoin, is breaking down. Indeed, the trust and acceptance of blockchain technology is increasing and becoming undisputed as the platform of the future.

People are willing to invest and show faith in Bitcoin algorithms and their specific pattern of trust; that computer code means something.

According to local legend, one of the most valuable rai stones was lost at sea in a great storm and never even completed its journey to Yap. The colossal stone now lies at the bottom of the Pacific, 150km short of its destination.

The islanders agreed that this particular rai stone was now of great value, even if they couldn’t set eyes on it.

Lessons for the future

The rise and fall of the rai shows that there is nothing entirely new when it comes to distributed ledgers. It also reminds us that the best technology doesn’t always catch on, as buyers of Sony Betamax VCRs will remember.

It is also a reminder of the consequences of tinkering with a currency structure (e.g., debasing, inflating). We’ve seen it in fiat currencies. Let’s resist it in cryptocurrencies.

Otherwise, future generations will struggle as much to remember Bitcoin in the way we struggle to remember the money of Yap.

According to Paul Barach, the historian and author, the rai’s gradual transition from riches to relics began when the Irish American Captain David O’Keefe washed ashore on Yap in the late 19th century.

By then, the quarrying and transportation of rai had reached their peak. A British naturalist reported seeing 400 Yapese men producing stones on Palau, which at the time was more than 10% of the island’s adult male population.

The sad end of the rai

A kind Yapese inhabitant nursed the shipwrecked O’Keefe back to health and sent him on his way. In gratitude, he returned to the island with modern sailing ships.

In exchange for coconuts, he brought metal tools from Asia to modernise the quarrying and finishing of rai, and Western ships to transport them. The people of Yap could easily print money and were therefore richer. This earned O’Keefe his own island.

The sudden increase in new rai caused inflation. The islanders of Yap no longer controlled the regulated supply and demand of rai. This caused the increase in rai on the island to become over 13,000 carefully machine-polished stones.

The importation of rai ended in 1898 when the Germans purchased the island from Spain following the Spanish American war. The stone coins still litter the island to this day, reminding us that nothing is new in this age of digital banking.

The Germans demanded roads to be built on the island and threatened the chiefs to remove the rai until the roads were built. In fact, the Germans could not move the stones but instead painted black German crosses on them as a mark that they now belonged to them.

The island of Yap was now bankrupt.

Rai stones were a clever and efficient form of money. It was debased, and there was inflation. Then an authority took control of the ledger and bankrupted the island. Let that be a lesson to us.