American Express (Amex) has teamed up with popular neo-soul singer and songwriter, SZA, to enter the NFT market.

The duo partnered to drop a set of 14 one-of-one edition NFTs, dubbed “Amex Unstaged x SZA: The Collection,” that depict moments from one of SZA’s recent concerts.

Participation in the NFT sale was made available only to Amex users, with the first 10 dropped on July 9, with concert-goer’s given exclusive access. The remaining 4 were dropped earlier today and were made available to all Amex users.

Each NFT was priced at $100 and all were sold out within hours of the drop. 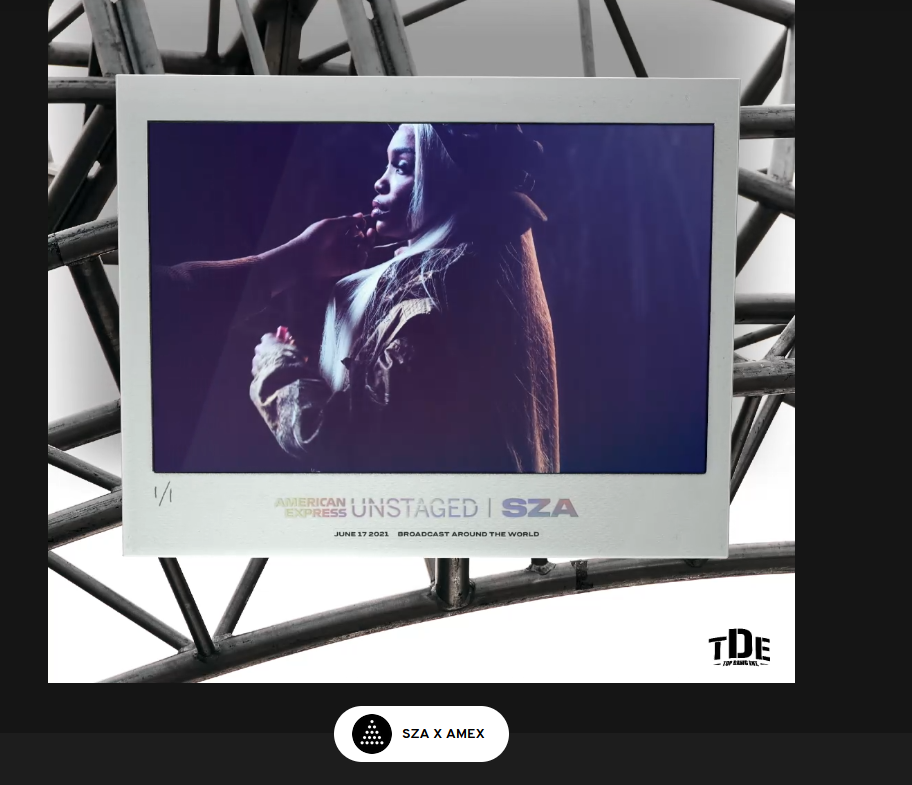 The sale was hosted on the Ethereum-powered Fanaply NFT marketplace. Other big names to have used the Fanapply marketplace are Death Row Records, comedian Joey Diaz, and musician Milky Chance.

Asics NFTs on the run

Japanese sports footwear manufacturer, Asics, is dropping a set of NFTs comprising GIFs depicting popular shoes from the firm, in addition to two new designs that will debut in tokenized form.

Slated for launch on NFT Marketplace, OpenSea, from July 15 until July 19, the Asics Sunrise Red NFT Collection consists of “limited editions” of 20 copies each, and nine “gold” one-of-one editions. In addition to seven classic styles depicted in the drop, Asics will debut two new designs in tokenized form.

It appears that Asics has plans to release more merchandise in the form of nonfungible tokens in the future, with profits from the drop slated for reinvestment into Asics’ Digital Goods Artist-in-Residence program to fund the creation of new NFTs.

Purchasers of the gold editions will also receive a free NFT in the future. The bonus token will be designed by an artist that will be selected through Asics’ Digital Goods Artist-in-Residence program.

Collectors can acquire a single token for free by registering with Nifty’s, and users can get a second NFT by sharing a social media post about Space Jam. Users can also purchase the NFTs for $2.99, and all tokens are randomly issued.

Jeff Marsilio, the co-founder and CEO of Nifty’s, and also former senior VP of new media at the NBA, told Variety that the platform is focused on making NFTs accessible to a mainstream audience.

Forest Road Co., an investment firm building the forthcoming NFT marketplace, Notables, claims to have acquired the help of Hollywood’s largest talent agencies in a bid to bolster the platform’s launch.

Speaking to Variety, the firm name-dropped William Morris Endeavor Entertainment Creative — the majority owner of Ultimate Fighting Championship, Creative Artists Agency, and United Talent Agency as stakeholders in the venture. Forest Road did not confirm if the agencies had directly backed the project financially.

According to the report, Forest Road hopes its partnerships with top Hollywood talent agencies will ensure high-ticket tokens are launched through the platform. Notables plans to support payments in both fiat and crypto.

Despite there already being carbon neutral NFTs platforms on the market, Forest Road touts that Notables will be the first-ever carbon neutral NFT platform, with the firm vowing to dedicate “upwards of $100 million” to fund the generation of 160 megawatts of solar energy to offset the resources expended by the platform.

Cointelegraph reported on July 9 that NFT metaverse, The Sandbox, had partnered with Skybound Entertainment, the company behind The Walking Dead comic franchise, to incorporate the popular series into The Sandbox’s virtual world.

The partnership will see The Sandbox launch a Walking Dead game mode, allowing users to play as their favorite characters, recreate scenes from the series, and build tradable in-game assets.

As part of proof-of-gaming, the firm is building a dedicated game client that provides in-depth analytics on a player’s movement, speed, and reaction times — enabling them to build on their skills, and will support popular games such as Dota 2 and League of Legends.