Since 2009, Bitcoin has come a long way while proving its worth, improving its regulatory standing and raising interest globally through media and the internet. From having zero relative value to fiat as a currency in its early days to being valued at $19,783.06 in December 2017, bitcoin has shown immense power. Today, nearly everybody, whether or not they know about blockchain technology, has at least heard of Bitcoin.

Below is a timeline meant to express how far Bitcoin has come in such a relatively short amount of time, from inception as a revolutionary concept to an asset that is being hoarded by major, publicly-traded companies. It has faced various kinds of uplifts and downfalls and has stood strong through all of them. Let’s look into how well Bitcoin has performed in the last decade and the new trend in the space that could bring it even further along.

Bitcoin came into existence in 2008 when, for the first time ever, a real-life cryptocurrency was introduced. Bitcoin’s white paper was released by Satoshi Nakamoto as “Bitcoin: A Peer-to-Peer Electronic Cash System” while Nakamoto’s identity has remained a mystery since. It was launched to ensure a decentralized peer-to-peer currency trading and exchange system in which no third party is involved to delay the transaction process and charge additional money for allowing transactions.

As the world’s most versatile cryptocurrency, bitcoin has been used to purchase goods and services, or as an investment asset and as a tool for achieving sovereignty. It is easily exchangeable for other cryptocurrencies or other fiat currencies through various exchanges. Before Bitcoin came into existence, a number of digital cash technologies prevailed, but each had its limitations and included third-party systems. Bitcoin came as a revolution that went beyond these electronic cash systems.

Bitcoin has impacted almost all the fields of life, particularly the economic, banking and financial sectors. Each transaction made on the Bitcoin blockchain is digitally recorded to ensure high security along with high speed. Although all transactional information is shared among all the nodes in the network, the transacting individuals’ identity is kept secret and is never revealed. The financial and economical power which was once solely owned by the governments and the central financial institutes has been revolutionized thanks to the invasion of Bitcoin along with blockchain technology, which make these institutes wary of this trailblazing technologies.

Bitcoin’s Journey As An Asset Today And Into The Future

Throughout the past decade, there has been constant fluctuation in bitcoin’s financial value relative to fiat currency.

The graph below shows how volatile Bitcoin’s prices was between 2013 and 2019: 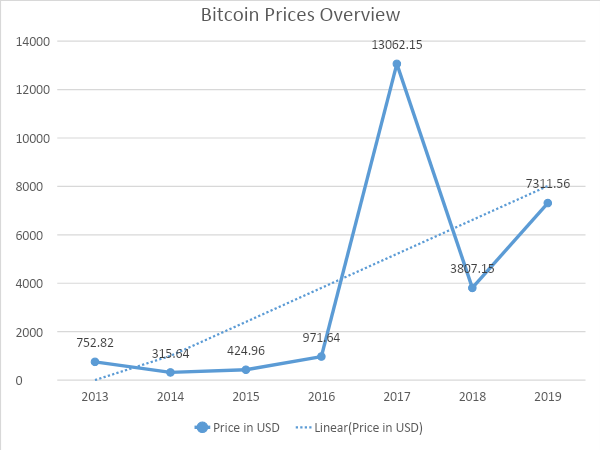 Today, bitcoin is being recognized as a currency, more than just as an investment asset. Bitcoin is openly accepted in most developed and developing countries around the world. There have been 583.532 million BTC transactions so far in 2020 alone (as of this writing on November 5, 2020)

For much of 2020, bitcoin maintained a price range below $10,000 with a lowest value of $5,000 in its first half. As of November 3, 2020, bitcoin is valued at $13,731. Bitcoin prices are as unpredictable as the weather but we can anticipate steady growth in its value till the end of 2020. I expect Bitcoin to hit all-time high rates by the end of 2020, due in part to the new trends emerging in decentralized finance (DeFi).

As of this writing, a total of 18.534 million BTC are currently in circulation, but only about 169,200 BTC are locked into other DeFi projects through “wrapped” bitcoin projects that lock the asset onto other blockchains.

As per these stats, less than 1 percent of all BTC in circulation are now locked into other DeFi projects. But as DeFi experiments attract more public interest, gain more trust and lock in more bitcoin, bitcoin’s value and utility will elevate.

Bitcoin is still loyal to its aim of freeing people to transact on their own terms while ensuring security and anonymity at the same time. Bitcoin has improved enormously in its financial and technical aspects throughout the last decade and yet has a long way to go. As soon as Bitcoin clears its way through tax liabilities, legalities and makes a firm standing in the international currency markets, Bitcoin will become the ultimate currency of the future while scaling into a major payment network.

This is a guest post by Fernando Martinho. Opinions expressed are entirely XX own and do not necessarily reflect those of BTC Inc or Bitcoin Magazine.

We will use your email address only for sending you newsletters. Please see our Privacy Notice for details of your data protection rights.The warning came...

The Bitcoin funds managed by Mike Novogratz-owned Galaxy Digital have raised $58.7 million in the first year of their operations, according to a couple of...