For the last few days, Ethereum has been adding incredible returns for investors. According to CoinMarketCap, on Monday, ETH added over 16% pushing the coin to a new record of slightly over $3,450. At the time of writing, the coin was trading at around $3,470, a gain of 9.43% over the last 24 hours.

Ethereum Short Squeeze Is Responsible For The Rally

A short squeeze refers to when short-sell orders in the futures market are liquidated in a short period of time. When the shorts are liquidated, short-sellers will have to buy back their positions. This automatically causes buyer demand to increase in the market.

Hence, the number of shorts rapidly declines, and long contracts or buy orders begin to dominate the market.

In the case of Ethereum, the last 24 hours has seen all-time high short liquidations across all derivative exchanges. According to cryptoanalysis firm, CryptoQuant, the cryptocurrency liquidations reached about $55 million in exit leveraged long positions causing the price to surge to a new record high. 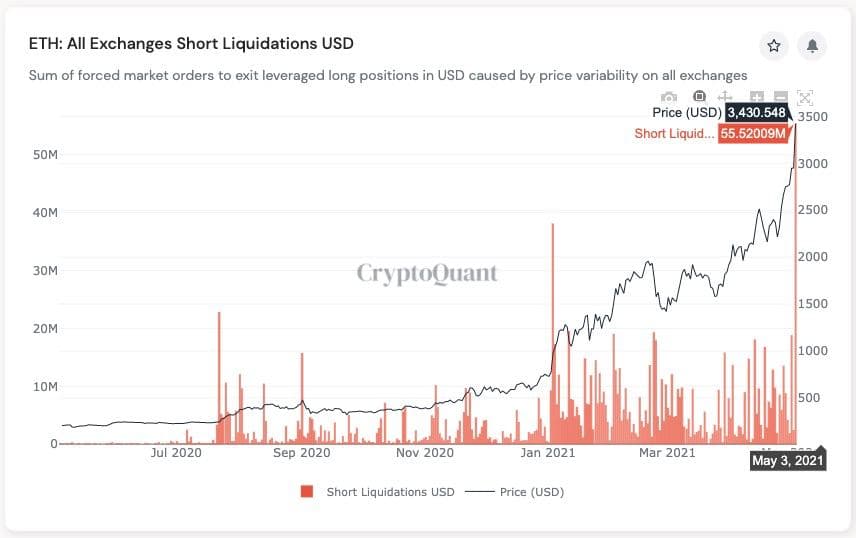 As a result of the increased volatility, Ethereum (ETH) saw its market capitalization spike to almost $400 billion. Notably, its daily average traded volume stood at approximately $72.7 billion according to metrics provided by CoinGecko.

According to the chart, higher support is required to keep the bears at bay and allow bulls to focus on price levels above $3,500 and $4,000, respectively. The Moving Average Convergence Divergence (MACD) suggests that Ethereum is firmly in the bulls’ hands. 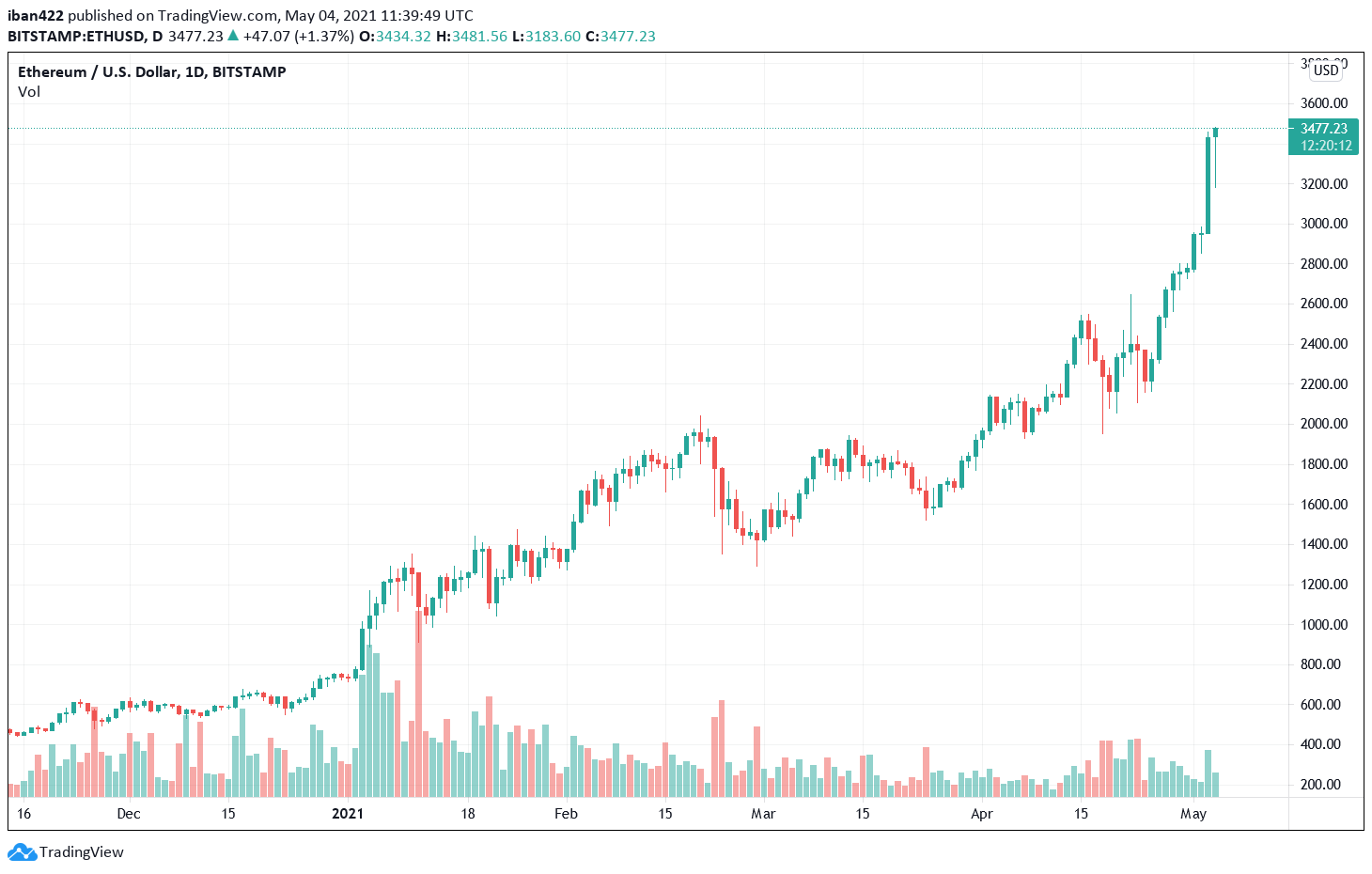 Ethereum, the second-largest digital asset by market capitalization, has earned a warm welcome from institutional investors, owing to its massive DeFi supremacy. Coincidentally, Ethereum began to eat away at Bitcoin’s market share, with the latter having about 44.6 percent against 16.7% for ETH. The average amount of ETH gas is 39 gwei.

After a two-week period of consolidation, the cryptocurrency bulls were re-energized by a surge in the price of Ethereum. The cryptocurrency market, however, is in a super-cycle. According to Dan Held, a prominent cryptocurrency analyst, and will continue to rise in the coming months.

“Money printers go Brrrr…Bitcoin was planted during the 2008 financial crisis as an antidote to bad central banking policy, but it has grown during a macro bull run (largely no recessions or depressions from 2008 – 2020),” Held noted.

He further added that:

“With Bitcoin’s current 4-year microcycles coinciding with the longer macro ~10-year cycles, that puts Bitcoin in a potential Supercycle. This is similar to Ray Dalio’s observation of short and long-term debt cycles but on an accelerated timeline.”

“Thousands of developers are building applications that recreate traditional financial products in decentralized ways on top of Ethereum, and as more and more users pour in to interact with these apps, they require ETH (ether) to conduct any transaction,” said Sergey Nazarov, co-founder of smart contract company Chainlink.

“Second, there seems to be growing institutional interest in the public Ethereum blockchain, as stakeholders play around with ways to leverage the public network,” he added.