Elon Musk is known for his support of the meme cryptocurrency Dogecoin. Every time he posts something about the altcoin, its price skyrockets. However, the community hopes that the billionaire will take DOGE even further – to Mars.

Although it sounds more like a joke now, Musk is known for his space travel initiative and his ambitious plans to colonise the Red Planet. He is also one of the largest Dogecoin holders in the world.

A popular Dogecoin follower, Matt Wallace, tweeted that Elon’s fortune is worth 861 billion DOGE. Tesla and SpaceX founder was not late in coming with a comment, hoping that this amount will be enough to take humanity to Mars.

Elon Musk (with a net worth equal to 861 billion #Dogecoin) is now richer than Bill Gates and Warren Buffett COMBINED!

The mysterious Red Planet, named after the Roman god of war, has occupied minds for many years. But if a century ago the possibility of travelling to Mars seemed like just a plot for science fiction novels (remember Edgar Rice Burroughs), now, with all the technology we have, it could well become a reality.

Elon Musk announced his plans to colonise Mars back in 2002 when he founded the company SpaceX. Since then, he has been actively working to make this dream a reality. Now, the pilot flight of the spacecraft could take place in 2022. If successful, the Red Planet could be colonised by 2050.

Of course, when a colony is established, it needs a currency to settle accounts between its citizens. Given the level of innovation and potential need for cross-planet transactions, cash would hardly be suitable for this. So why would not this be DOGE? After all, Musk is a known proponent of this altcoin, as reported by CoinIdol, a world blockchain news outlet.

Meanwhile, while waiting to conquer space, DOGE might try to reach the sky with its price. Although the market has been generally positive, Dogecoin has been in the red for the past 7 days. However, the last 24 hours have been quite successful for the altcoin as it recorded a gain of over 6%. At press time, DOGE is trading at $0.2407. 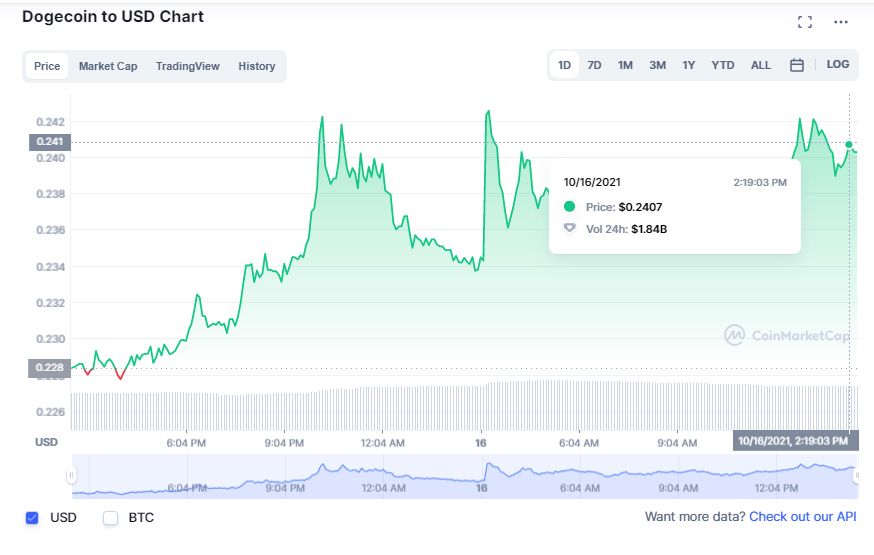 After the tweet and the comment went live, Dogecoin experienced several spikes, reaching highs of $0.2422 and $0.2425. From this perspective, it is difficult to speak of a significant impact. The swings could very well be a continuation of the general uptrend.

If Elon Musk gets serious about using Dogecoin for his space programmes, the price could rise to the stars before the coin itself flies into space.