In the official play-to-earn community of Cryptosnake, a large-scale “Intergalactic Competition” has been announced. You need to collect the most pixels in the “Snake” arena to win. This is a good chance for those who used to get stuck in a snake for hours in the 90s-00s! 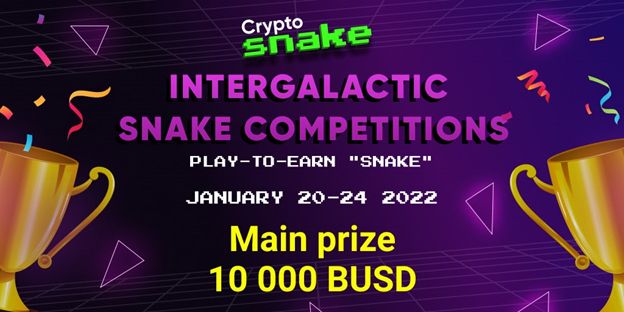 Participation in the competition is free. Any player can try.

The competition will begin on January 20 at 14:00 UTC and last until January 24 at 12:00 UTC 2022. The winner is the one who earns the most in-game SNK tokens on the playing field during this time. The number of games per day is limited: no more than 3 games per day, 10 minutes each. It is allowed to use multiple snakes to increase the chance that at least one of them will win.

The gameplay of the blockchain game is implemented using SNK game tokens and non-fungible tokens (NFT). In fact, this is an ordinary “Snake”, where you need to move the snake across a square playing field, try to eat as many coins (pixels) as possible and dodge obstacles so as not to collide with the border of the map or with your own body.

The difference from the classic snake is that Cryptosnake allows you to make money on the game. The most agile snake breeders are already making $10 to $50 per day from each snake in the arena. Players can also profit from staking (from 30% to 115% per annum depending on the type of snake).

Read more about the game on the official website cryptosnake.game.

The launch of Intergalactic Competitions is associated with the appearance of a new character in the game — Black Mamba. This snake has unique characteristics, including increased speed. Black Mamba snakes are more difficult to control than others, so it will be a real test of agility.

The most agile player will receive a prize of 10,000 BUSD

There are ten prizes in total:

The prizes will be credited to the cryptocurrency wallets, which are connected to the game.

The use of bots and third-party programs is prohibited. The game algorithm is able to identify cheaters and block the game.

All players with a Black Mamba snake will automatically take part in the competition. Snake NFT is given for free when staking amounts of 99 SNK or more (at the time of this writing, it is about $15).

Prizes are waiting for the best serpentine breeders! Have a good game!

Follow the game news in the official Telegram community

Disclaimer. This article is paid and provided by a third-party source and should not be viewed as an endorsement by CoinIdol. Readers should do their own research before investing funds in any company. CoinIdol shall not be responsible or liable, directly or indirectly, for any damage or loss caused or alleged to be caused by or in connection with the use of or reliance on any such content, goods or services mentioned in this article.