A United States appeals court is set to hear the oral arguments relating to Grayscale Investment’s lawsuit against the Securities and Exchange Commission (SEC) over its decision to deny Grayscale’s Bitcoin (BTC) spot exchange-traded fund (ETF).

According to a court motion filed on Jan. 23, both sides will present their arguments at the District of Columbia Court of Appeals on March 7, at 9:30 am local time.

Oral arguments are spoken presentations delivered by attorneys summarizing why their clients should win the case. Each party in the case takes turns directly speaking and answering questions from the judge and is given equal amounts of time to do so.

In a tweet on Jan. 24, Grayscale Chief Legal Officer Craig Salm said the newly filed motion was “welcome news” as they were previously anticipating oral arguments to be scheduled “as soon as Q2.”

The composition of the argument panel in the Grayscale case will be revealed on Feb. 6, 30 days prior to the date of the oral argument, while the amount of time for the argument will be set in a separate order, according to the motion. 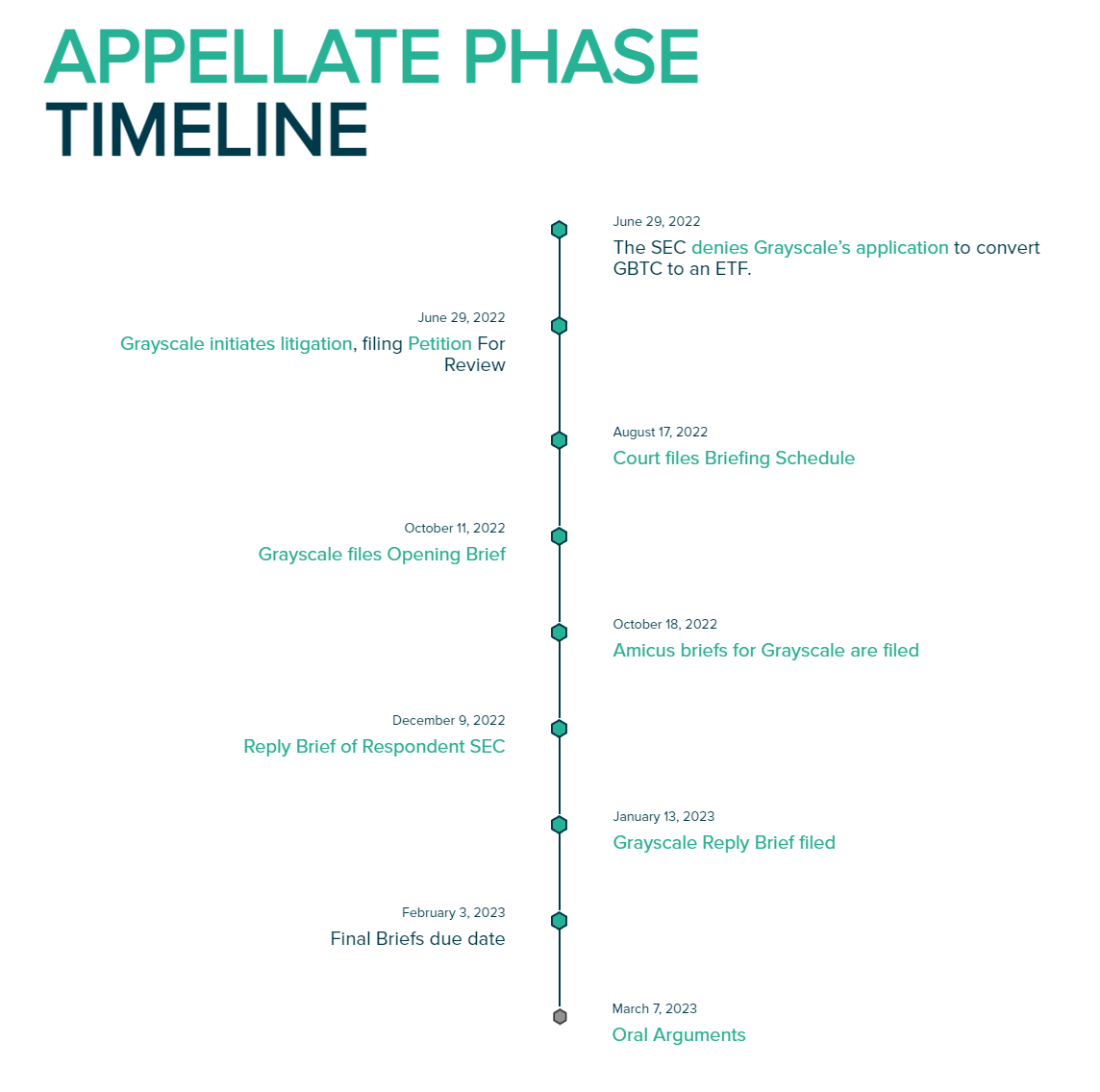 Grayscale initiated its lawsuit against the SEC in June after the regulator rejected its application to convert its $12 billion Grayscale Bitcoin Trust (GBTC) into a spot-based ETF.

Earlier this month, Grayscale filed a reply brief with the D.C. Court of Appeals, claiming the SEC acted arbitrarily in treating spot-traded ETFs differently from futures-traded products and that the SEC exceeded its authority when it denied Grayscale’s application for a Bitcoin ETF.

“It’s important to remind the role that regulators like the SEC play when it comes to investors. They’re not here to tell investors what to or what not to invest in. They’re here to ensure all the proper disclosures are made […] so [investors] are aware of all the risks associated.”

Sonnenshein said they were “certainly expecting” a decision from the courts regarding its case against the SEC in “Q2 or Q3 of this year.”

“The frustrating thing for investors and certainly the Grayscale team is that we’re actually a business that was born in the U.S., made use of existing U.S. regulatory frameworks to bring crypto to investors in a safe and compliant way.”

“Meeting with both houses yesterday and today, what we’re really hearing […] is that had the SEC already approved this spot-Bitcoin ETF […] a lot of the recent investor harm we’ve seen in crypto would’ve been prevented,” he added.

HSBC needs someone to helm its tokenization efforts