Coinbase, America's largest cryptocurrency exchange, has just set foot in Japan, a vibrant crypto market. However, this entry presents both opportunities and challenges.

Japan is one of the few countries in the world with a solid regulatory atmosphere for cryptocurrencies and is considered one of the most crypto-friendly nations. Under Japan’s Payment Services Act (PSA), bitcoin and other digital assets are recognized as property. As such, cryptocurrencies can be used as payment or even converted into the Japanese Yen or USD.

Japan now ranks among the top 10 countries where cryptocurrencies are most widely used. A research result shared by Yahoo Finance found that at least 4% of Japanese own or use some form of cryptocurrencies.

While Binance is under scrutiny around the world, other cryptocurrency exchanges are thriving, according to CoinIdol, a world blockchain news outlet. In just about two years, Coinbase’s assets grew by 1,200% and are expected to grow even more. The company continued to expand its human resources and now employs 1,200 people around the world.

According to CoinMarketCap, Coinbase had 56 million verified users registered as of May and ranks second in both popularity and trading volume, behind only Binance. The demise of Binance is an opportunity for Coinbase and other cryptocurrency exchanges to capture the crypto market and expand operations overseas.

Coinbase recently expressed its excitement to gain a foothold in Japan, the world’s third-largest economy after the US and China. Japan boasts ease of doing business and hospitality to international companies. In Japan, it is possible to start a business in as little as 14 working days, while the country remains a center for technology and innovation. In Asia, the Tokyo Stock Exchange (TSE) is the largest, with nearly 4,000 listed companies and a market capitalization of almost $6 trillion. 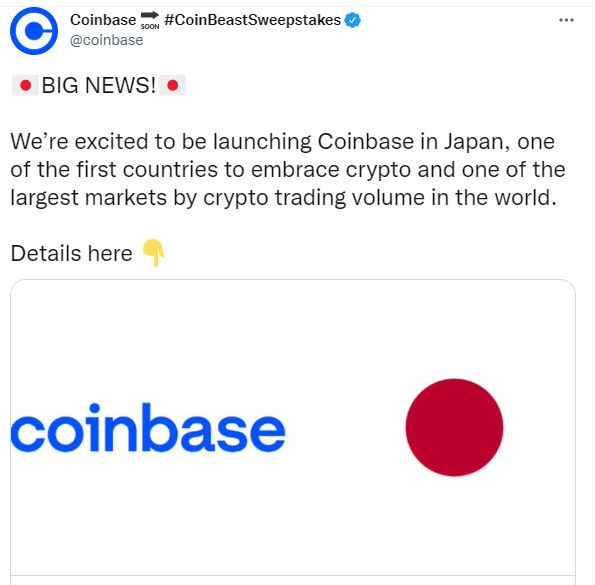 Coinbase will certainly have a conducive environment for conducting business and developing new ideas.

Japan is a crypto-friendly country and is considered the “mother of Bitcoin.” The world’s first cryptocurrency exchange appeared in Japan a year after Bitcoin’s launch. In April, Japan began piloting its Central Bank Digital Currency (CBDC).

Although Japan supports cryptocurrencies, the country is constantly concerned about crypto fraud. In 2014, Mt. Gox, the world’s first and largest cryptocurrency exchange, lost all the bitcoins it held. The 850,000 bitcoins at the time would be worth over $40.6 billion. The company went bankrupt and was dragged to court by its creditors.

Less than a month ago, Liquid, the largest cryptocurrency exchange in Japan, was involved in another hack that resulted in the loss of nearly $100 million. Coinbase must be aware of the frequent attacks on crypto exchanges in Japan. On a good note, Coinbase is considered one of the safest exchanges as it stores about 98% of its assets in cold storage, making it hard to hack.

Japanese financial regulators are known for their continuous fight against money laundering. In 2018, Binance Japan’s Financial Services Agency (FSA) kicked Binance out of its territory for non-compliance. Coinbase must be in the good books of the FSA.

Congratulations to Coinbase for entering Japan, a country with high cryptocurrency and blockchain potential. However, the American-based cryptocurrency exchange should pay attention to several factors. From regulation to consumer protection to fraud, Coinbase should be ready to draw the sword and throw away the scabbard.