The last quarter of 2017 did not change the position of FXCM as sitting among the biggest non-Japanese retail FX brokers in the world. With an average volume of $194 billion, the Leucadia-owned company remained in 5th position in the Finance Magnates QIR 4 volume rankings. 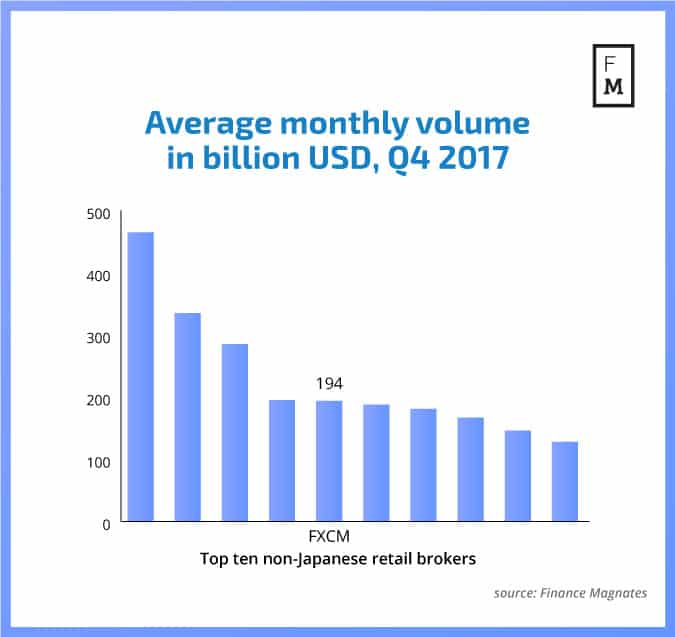 While some may argue that the broker is far from the position it used to hold, when we take into account the overall situation and pressure from competitors, Q4 actually looked relatively good for FXCM.

While it could not avoid one UK-based CFD broker jumping ahead of it in the rankings, it managed to finish the year ahead of its longtime US rival. With 118,000 active accounts in Q4, it was still the second biggest retail FX broker outside of Japan, according to Finance Magnates Intelligence data.

Recently FXCM unveiled a new brand identity, showing the familiar FXCM sign with the added phrase ‘a Leucadia company’. The new brand is the result of the loan agreement between FXCM and Leucadia National in January 2015.

At the time, the brokerage received a $300 million two-year loan. The addition of Leucadia to the logo of the firm is aimed at boosting its corporate image, especially in the institutional sector where it is well recognized.

In a comment to Finance Magnates, an FXCM spokeswoman said: “Beginning in January 2015, through a series of transactions, Leucadia has become the majority economic owner of FXCM. FXCM has benefited from the scale and breadth of the Leucadia family of companies since then and now Leucadia is present in the company’s brand identity. Firmly committed to FXCM’s success, our customers, employees and stakeholders benefit greatly from the Leucadia affiliation.”