India’s time use survey for January-December 2019 had found that an average person in urban areas spends 485 (eight hours and five minutes) minutes on employment and related activities.

Earlier this year, the UAE announced that it would reduce the workweek to 4.5 days to align with the global standards.

While India is yet to bring out its labour codes, there is speculation that India will reduce the workweek to four days.

However, work time will increase to 12 hours, limiting the number of working hours a week to 48 hours.

The Factory Act, 1948, mandates a 48-hour working week in India, but it stipulates that a person cannot work more than nine hours in a day.

Recently, the Chilean presidential race winner, Gabriel Boric, announced that he shall bring down the workweek to 40 hours.

Famous economist John Maynard Keynes had predicted a world where a 15-hour workweek would be the norm.

Data from Organisation for Economic Cooperation and Development shows that Colombia and Turkey have the highest average workweek, whereas most European countries have less than 40-hour workweek.

People in Asia tend to work more than the rest of the world, and workers in the US spend more time on work than their European counterparts. 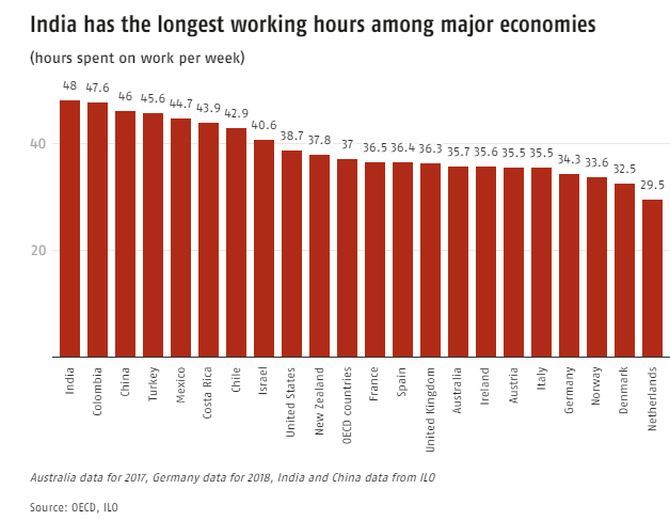 Although the OECD does not include India data, the International Labour Organisation found that India was among the worst five economies with an average working time of 48 hours a week.

Further analysis by Business Standard shows that average hours worked on a job had increased in the US, the UK and OECD countries compared to a decade ago.

India’s time use survey for January-December 2019 had found that an average person in urban areas spends 485 (eight hours and five minutes) minutes on employment and related activities.

The average time spent across rural and urban areas was seven hours and nine minutes.