The fast food chain is partnering with Kellogg to make “Wendy’s Frosty Chocolatey Cereal,” a limited-edition item that transforms the milkshake’s chocolatey taste into cereal form. It hits grocery store shelves in December for a suggested price of $3.99 and includes a coupon for a free Frosty from Wendy’s.
The cereal contains chocolate-flavored marshmallow pieces that “intermingle with crispy, cocoa-coated round cereal bites.” Each spoonful “evokes the irresistible taste of a Wendy’s Frosty,” according to a press release. 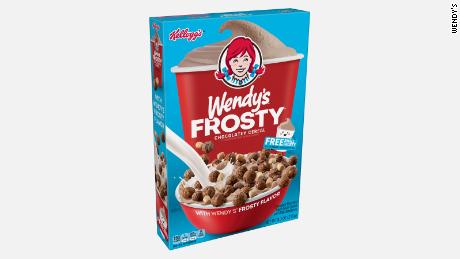 Wendy’s (WEN) has previously partnered with Kellogg to extend the chain’s menu items from its locations to grocery shelves. Pringles, which is owned by Kellogg (K), created a potato crisp based off the flavors of a Wendy’s Spicy Chicken sandwich. The company has also sold Baconator-flavored Pringles.

The Frosty was added to Wendy’s menus in the 1960s and continues to be popular. The treat is sold in other versions, including the “Frosty-ccino,” a Frosty milkshake infused with cold brew coffee, that’s seen on its successful breakfast menu.
Cereal sales have had resurgence amid the pandemic because more people are eating breakfast at home and are seeking out nostalgic brands.
Source: Read Full Article

Tags: fast food is going big on, Why