In early summer, a day laborer laying irrigation lines at a plant nursery just south of Portland, Ore., collapsed to the ground and died. His official cause of death was declared “heat related.”

It was 104 degrees out — several days into a brutal heat wave whose like has become increasingly commonplace in many parts of the country. Mussels and clams baked in their shells along the Washington coast. Record temperatures and fierce winds fueled one of the largest wildfires in the United States.

Drought, megafires and heat waves are descending on the Pacific Northwest as the effects of climate change alter the landscape. They have forced farm owners, fieldworkers and state regulators to navigate newly extreme conditions.

But visits to several farms in the Rogue Valley in Oregon and in Southern Washington over the last month showed that the response can often feel improvised, and at times inadequate. 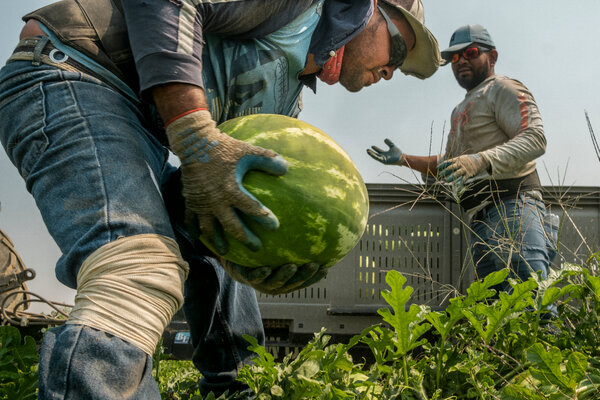 Policymakers in Oregon and Washington have recently established safety regulations to protect workers. Just after the punishing heat wave in June, Gov. Kate Brown of Oregon directed the state’s Occupational Health and Safety agency to adopt emergency rules for any workplace where conditions could lead to heat illness.

The rules, which took effect Aug. 9, require employers to provide access to shade and cool drinking water in farms and other outdoor places when temperatures reach 80 degrees, with additional requirements to offer more breaks and periodic wellness checks when it reaches 90 degrees.

The rules also require employers that provide temporary housing to field workers, like those with H-2A agricultural visas, to keep rooms at 78 degrees or below. Washington State this year created similar emergency rules to manage extreme weather patterns, joining Minnesota and California, which have also imposed heat safety regulations that apply to farms in recent years.