It’s easy to forget that just a year ago, senators from both parties were under Justice Department scrutiny for potentially profiteering from the coronavirus with well-timed stock trades.

Both of Georgia’s Republican senators took a pounding over their trading. Jon Ossoff, the Democrat who defeated Senator David Perdue, side-eyed Mr. Perdue’s transaction reports and declared him a crook. Mr. Perdue lost, and so did his Georgia colleague, Kelly Loeffler.

Trading in individual stocks is risky enough as it is, and nobody in elected office needs the temptation to trade on inside information or the appearance of impropriety. So I figured it would be an easy yes when I asked the new arrivals in Washington whether they planned to sell off any stock shares and pledge not to buy more while in office.

Of the more than 60 lawmakers I tried to contact, only a dozen even answered my questions directly. I never heard back from staff for roughly half of the newcomers, despite repeated inquiries by email, phone and social media.

Why so shy, Representative Kai Kahele, Democrat of Hawaii? Your disclosure doesn’t show any stock holdings. Greetings, Representative Diana Harshbarger, Republican of Tennessee. You have so many different stocks that I’m not sure where to start. Can we talk?

A handful of new arrivals did offer up a pledge to me to avoid individual stocks. Hats off to Representative David Valadao, Republican of California, and Representatives Jake Auchincloss of Massachusetts, Mondaire Jones of New York and Teresa Leger Fernández of New Mexico, all Democrats. 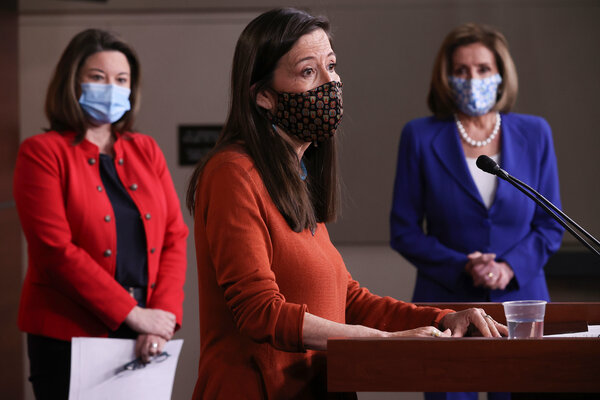 Back in November, I had put this question to Mr. Ossoff and the Rev. Dr. Raphael Warnock, who went on to defeat Ms. Loeffler, and both agreed then that members of Congress shouldn’t trade individual stocks. Mr. Warnock owns only mutual funds, and Mr. Ossoff is putting his assets into a blind trust — meaning he won’t know what he owns and a trustee will make the investment decisions. That’s also what another new Democratic senator, Mark Kelly of Arizona, is doing. And it’s a perfectly reasonable solution.

According to a recent financial disclosure form, Representative Peter Meijer, Republican of Michigan, already had a trust worth at least $50 million when he arrived in Washington, thanks to the retail fortune generated by the Meijer chain of megastores. I didn’t expect him to be among those who would want to discuss this issue. But he got on the phone to talk it through with me.

Mr. Meijer said he had sold the shares that he had direct control of and could sell — capital gains taxes, be damned — but requested one allowance. He plans to keep the five shares of John Deere that his grandparents gave to him. The shares, worth $1,886.25 at the market close on Friday, have sentimental value.

“Blind trusts, or not actively trading equities, should be the overwhelming expectation,” he said.

But he made a worthy point in our discussion about whether an outright ban on stock ownership is appropriate: Plenty of new arrivals in Washington have spouses with their own careers. Their jobs might come with employer stock — and there could be serious tax implications if rules forced them to liquidate.

That raises a fair question: Would any such regulation keep too many good people out of politics in the first place?

It’s hard to know for sure. But heated debate around the issue certainly didn’t cause any candidates to stand down last year.

Even as stock ownership was a hot campaign issue in neighboring Georgia, Scott Franklin forged ahead with his ultimately successful House campaign in Florida. Mr. Franklin, a Republican, has stock that he must hold under the terms of the sale of the insurance company that he used to run.

But he also holds individual shares of financial services companies like Visa, Discover and PNC. Does he believe they pose a potential problem in his work on the House Oversight and Reform Committee or its economic and consumer policy subcommittee?

“He does not feel there is a conflict,” said his chief of staff, Melissa Kelly.

At least he replied. Another freshman Florida Republican on the subcommittee, Byron Donalds, did not respond to five requests for comment. Mr. Donalds, whose former employer, a wealth management firm, still lists him on its website as an associate vice president, owns many individual stocks in health insurance companies and financial services firms, according to his most recent disclosure form.

Additional attention in this area is a notion with bipartisan support, in an era that lacks much of that. In June, Representatives Chip Roy, Republican of Texas, and Abigail Spanberger, Democrat of Virginia, introduced what they called the Trust Act.

The bill would require their colleagues, spouses and dependent children to use a qualified blind trust, as Mr. Ossoff and Mr. Kelly are doing. With such vehicles, a third party would control individual stocks, if any, and some other investment assets and keep the beneficiary from knowing much about the contents or from trading on specialized knowledge of coming legislation. (Owning and trading common investments like mutual funds would be fine.)

“This is about making it easier for members of Congress to do their job,” Mr. Roy said at the time.

And let us not forget what I outlined in detail in a November column: They’ll all end up with more money in the end, on average, if they (or their stockbrokers) stop believing that they’re smart enough to beat the market. The studies on this are legion, and a particularly fun one showed how badly people in Congress did, on average, when they tried to outsmart the market between 2004 and 2008.

It is perhaps not surprising that those who would be elected officials would not be passive investors. The same enhanced sense of self that propels many of them to run for office may well make them think they have some kind of stock-picking superpower. They almost certainly don’t — and neither do the financial advisers who are charging them handsomely. Perhaps they’ll come to their senses eventually.

Others may own stock or trade it to blow off steam, as a form of gambling. If they can afford to lose the money, and are truly not using any inside information or in a position to influence the policies that affect the companies they bet on, then there is no real harm.

But do they wish to lose elections over it?

Certainly, stock trading wasn’t the only issue at play in Georgia. But in purple parts of the country or districts where upstarts in their own party would try to make a case of it, these newly elected officials could be vulnerable. If they avoid individual stocks for political reasons rather than more principled reasons, so be it. It’s all to the good.

Or perhaps these committed owners and traders of stock will answer to you, if not to me or someone trying to take their job. Look up your representatives’ stock holdings, which government websites make it easy to do for both senators and members of the House.

If you find yourself exercised by their holdings, write them a letter or give them a call. Tell them I sent you, point to this column, and let me know if and how they reply.

Maybe you’ll have better luck than I did.