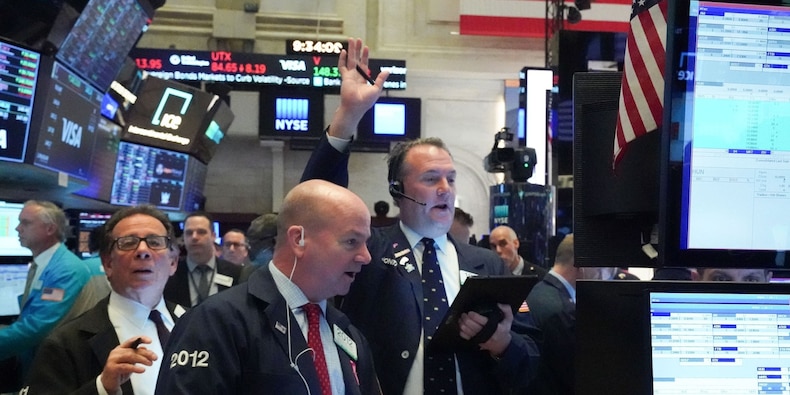 Index futures dipped after filings for unemployment benefits rose for a second straight week. New jobless claims climbed to an unadjusted 778,000 for the week that ended Saturday, the Labor Department announced Thursday. Economists surveyed by Bloomberg expected a reading of 730,000. The reading comes after a similarly unexpected jump in claims last week.

Continuing claims, which track Americans receiving unemployment benefits, dipped to 6.1 million for the week that ended November 14. That reading also came in above economist forecasts.

Read more: Buy these 19 small-cap stocks that hedge funds have invested the most dollars in as smaller companies head for their strongest monthly outperformance ever, RBC says

“Weekly unemployment insurance claims are moving in the wrong direction with the first back-to-back increases since July,” Robert Frick, corporate economist at Navy Federal Credit Union, said. “Together with a slower-than-expected drop in continuing claims, we’re seeing the effects of rapidly-rising COVID-19 cases across the country.”

Wednesday is the last full trading session of the week. Markets are closed for the Thanksgiving holiday and will close at 1 p.m. ET on Friday.

The Dow opened just above 30,000 after breaching the threshold in Tuesday trading before trading lower. The achievement rounds off a breakneck rally from the benchmark’s March lows.

Still, spiking COVID-19 case counts across the country threaten to upend the nation’s recovery before a vaccine is widely distributed. The US reported 166,672 new cases on Tuesday, bringing the 7-day average to 169,381, according to The COVID Tracking Project. Daily deaths surpassed 2,000.

Soaring cases have squared off with bolstered vaccine hopes in recent weeks. Encouraging progress toward distributing a shot in December has prompted a rotation into cyclical and value stocks as investors position for a recovery from the pandemic. Yet public health officials and economists warn the third wave of infections will likely worsen through the winter and further curb economic activity.

Nikola shares tumbled after the company’s CEO failed to reassure shareholders that its $2 billion deal with General Motors will be finalized ahead of a December 3 deadline. Should talks continue past the date, either party can exit the partnership.

Read more: A portfolio manager at $38 billion Baron Funds shares his checklist for investing in the most promising SPACs – and names 3 of the booming ‘blank-check companies’ he finds attractive now

Bitcoin held above $19,000 but failed to retake its record high of roughly $19,700. The cryptocurrency has surged higher in recent weeks as Wall Street giants and retail investors alike turn more bullish on the token.

Gold edged as much as 0.5% higher, to $1816.77 per ounce. The US dollar weakened against a basket of Group-of-20 currencies and Treasury yields dipped.

Oil futures held above $45 per barrel on lasting hope for a near-term recovery. West Texas Intermediate crude jumped as much as 1.8%, to $45.72 per barrel. Brent crude, oil’s international benchmark, gained 1.8%, to $48.72 per barrel, at intraday highs.

Tags: as, stocks, us, waver, worse-than-

What it’s like inside NZ’s tallest apartment tower: The Pacificia