Trump’s senior advisors are urging him to make a PSA convincing his followers to get the COVID-19 vaccine.

“Vaccines are widely regarded as one of Trump’s greatest accomplishments, and Trump understands that this legacy is at risk because half of his supporters are not taking the vaccine,” one of the officials said to CNN.

“It’s just not clear yet if he understands that he’s the only one who can fix this.”

CNN said the officials were attempting to convince Trump to film a vaccine ad, particularly after recent polls showed that around half of Trump’s Republican base were unwilling to take the vaccine.

One of the polls, which was carried out by the Kaiser Family Foundation, surveyed 1,862 adults from March 15 to 22. The poll indicated that 54% of Republicans surveyed said they were hesitant about getting vaccinated, 30% of Republicans and white evangelical Christians confirmed that they would definitely not get vaccinated.

A second official told CNN that he thought people were still hesitant about the vaccine and that they were unwilling to take it unless they heard from Trump that they should.

“In Trump country, if you want to call it that, there are still significant numbers of people who aren’t sure COVID is a real thing, despite folks getting sick, and there are lots of suspicions about the vaccine,” he said.

CNN reported that Trump administration officials revealed that they did not want to see his efforts to help develop the COVID-19 vaccine, an undertaking called “Operation Warp Speed,” undermined by vaccine hesitancy.

“I see Operation Warp Speed tipping towards failure, and it really concerns me,” one of the officials said. “If we don’t move half those people into the vaccinated column, we’re most likely not going to reach community immunity, and if we don’t reach it, then the president’s vaccine legacy is dead.”

The vaccine rollout in the US hit multiple snags earlier this year when states were left on their own to figure out a vaccine plan after Trump departed from the White House.

Vaccine rollouts have accelerated quickly under Joe Biden’s presidency, which saw 100 million people getting at least their first shot within his first three months. However, millions of Americans have missed their second vaccine appointments, citing a variety of reasons — including fear of flu-like side effects.

Trump endorsed the vaccine but stopped short of doing a PSA 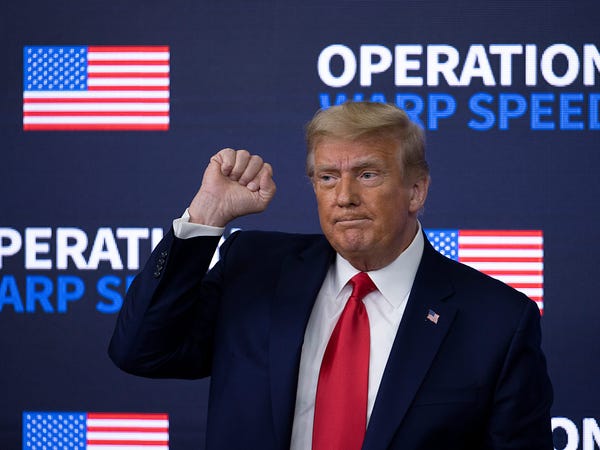 Trump has himself been vaccinated but did not post any pictures of himself doing so.

He also did not appear in a joint PSA aired last month, which featured all the other living former presidents.

However, Trump appeared on the Fox News show “Hannity” last week, telling host Sean Hannity that he would be interested in doing a commercial about the vaccine.

This week, Trump endorsed vaccines in an interview with The New York Post, saying he was “all in favor of the vaccine.”

“The vaccine is a great thing and people should take advantage of it,” Trump told the Post, confirming that he and former First Lady Melania Trump had received both their vaccine doses in January and February.

He did not reveal which brand of vaccine they received.

“Nobody should be forced, we have our freedoms. But I strongly recommend it because it’s a real lifesaver,” he said in the interview.

It should be noted that Trump has not discouraged his supporters from taking the vaccine. He even said in a 50-minute speech to donors at Mar-a-Lago that the COVID-19 vaccine should be called the “Trumpcine.”

Trump’s daughter, Ivanka Trump, recently shared pictures on Twitter of herself getting the vaccine, writing: “Today, I got the shot! I hope that you do too!”

Trump’s team did not immediately respond to a request for comment from Insider.