Twenty years after it first arrived to shake up a complacent Broadway and make a Pulitzer Prize winner of its author Suzan-Lori Parks, Topdog/Underdog has lost none of its vitality and power and cunning. Director Kenny Leon proves that in a vibrant new production opening tonight at the Golden Theatre.

Stars Corey Hawkins (The Walking Dead, Tony nominee for Six Degrees of Separation) and Yahya Abdul-Mateen II (Watchmen) tear into this play with a force that captivates from start to finish. Like the Three-card Monte sharks they portray, the actors are in full control, pacing their game and teasing out buried histories, secrets and longings with all the grace of a master illusionist.

They play brothers Lincoln (Hawkins) and Booth (Abdul-Mateen II) – named by their father as a cruel joke, just one among many lifelong burdens the sons inherit. With Lincoln, the elder, newly separated from his wife, the brothers are sharing the tight quarters of Booth’s rundown, one-room apartment. It’s a dump, and soon will be a cauldron. 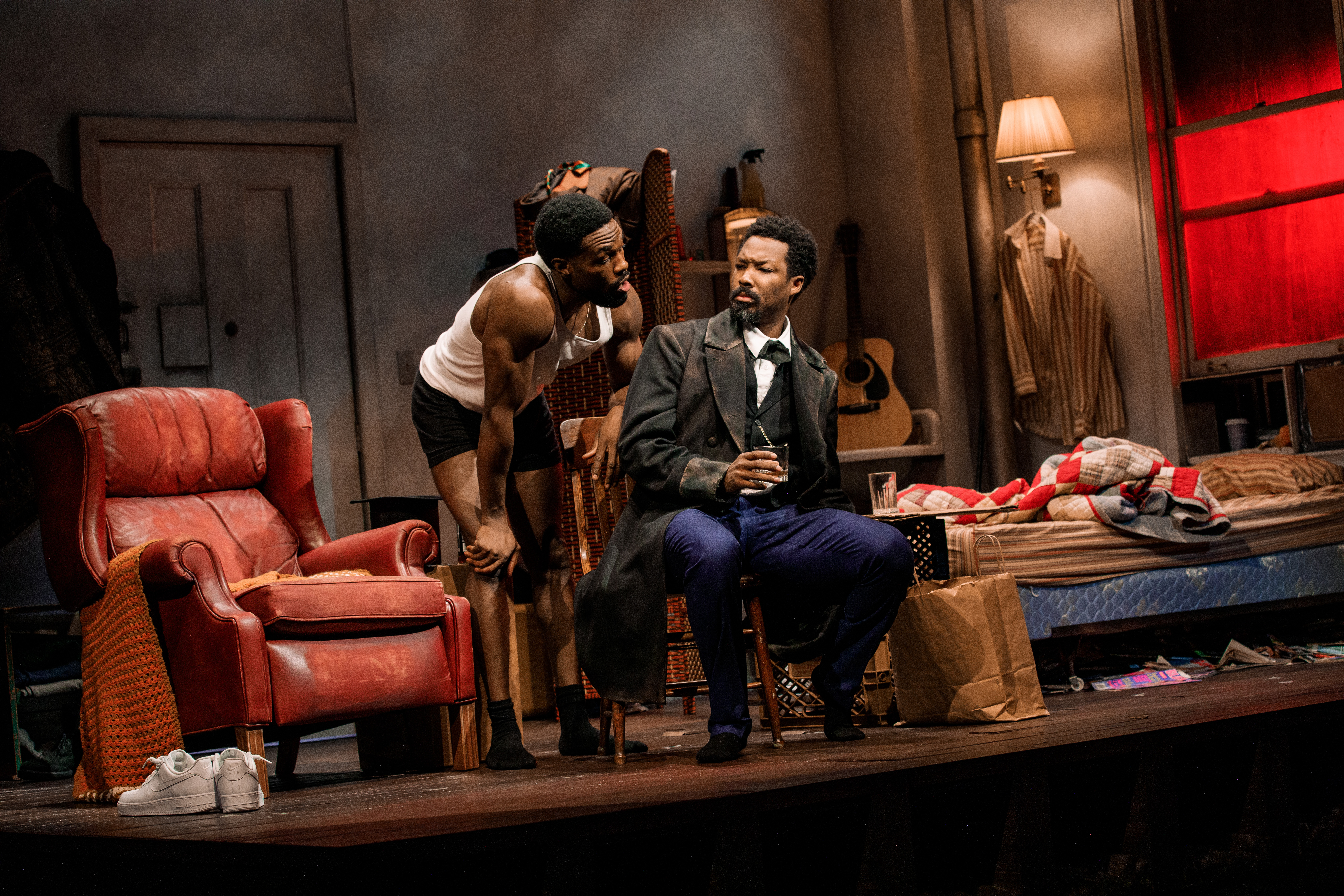 In perhaps the most audacious and risky example of Parks’ pointed, go-for-broke sense of humor, the playwright has Lincoln working as an Abraham Lincoln impersonator – in whiteface – at a local arcade, where customers pay to portray the historical Booth and reenact a certain pivotal moment at Ford’s Theatre. Heritage and destiny – to say nothing of humor and drama – collide in this bizarre display that works as both metaphor and reality. (Too fantastical? New York’s Coney Island had a “Shoot the Freak” attraction as late as 2010.)

With the brothers subsisting on Lincoln’s meager salary and Booth’s shoplifting skills, dreams for a better life come hard. For Booth, escape is all tied up in Three-card Monte, the street con that his brother once mastered for money and renown. Booth, whose talent for store thievery is more finely developed than his card game, needs Lincoln to rejoin the hustle, but Lincoln wants none of it, having sworn off after watching a friend and crew member shot dead in the street, the victim of one too many swindles.

As the brothers parry and thrust, each scoring little victories here and there, the play’s title takes on a shifting meaning – a topdog one minute could well be the underdog the next. The drama, and the laughs, come in watching actors as good as Hawkins and Abdul-Mateen II – guided, of course, by a director as commanding as Leon – as they shift and maneuver for position, never showing their hands until they’re good and ready (and that includes some expert and downright thrilling Three-card Monte: the production credits illusionists Derek DelGaudio and Michael Weber for “Deceptive Practices”).

And that’s pretty much it for plot – one brother attempting to convince the other of one thing or another, teasing, arguing, cajoling and joking, resurrecting a sad family history (the two were teenagers when abandoned by their parents) with each sibling having a revelation or two that, deployed at just the right moment, could shatter the other’s tightly constructed memories of the past and hopes for the future.

Playing out entirely in the cramped, sparsely furnished apartment – impeccably designed by Arnulfo Maldonado for just the barest of transformations when necessary – Topdog/Underdog has been given a terrific production here. Dede Ayite’s costume design is, like the play itself, an entirely credible blend of the mundane and the ever so slightly fantastical: the Honest Abe costume is at once creepy, funny and powerfully disturbing, and the flashy, tacky suits swiped from a store by Booth have just the right hint of the 1970s to suggest Topdog/Underdog‘s sense of being haunted by the past.

Of course, the tale is haunted, both by the legacy of a nation’s enduring racism and by the weight of a family’s self-mythology and expectations. Give all credit to the playwright, the director and this cast that when fate comes calling in this fine revival of a 20-year-old play, it’ll still steal your breath away.