In a stock market bubble, it may sometimes feel as if there are two stock markets — one is normal, the other weird and almost entirely scammy.

In these times, the portion of Wall Street operating in the “normal” market continues to do the methodical work of valuing corporations and investing in those they deem worthy. This market is boring and almost no one pays attention to it.

The other market is dominated by loud, self promoters trying to pump fad products that will ultimately implode. Every bubble has these charlatans. Ask anyone who survived the Tech Bubble about Internet Capital Group, a business to business holding company that went from $112 a share in early 2000 to $0.34 a share in September 2001. The company was helmed by Walter “Buck” White Buckley III, and he liked to throw a lot of seminars with big name CEOs.

Today promoting anything — not just stocks — is easier than it was back in the early 2000s, and today’s “Bucks” are taking full advantage. Some, like Silicon Valley billionaire Chamath Palihapitiya, are promoting themselves and anything that comes from their brand. Others — like Robinhood CEO Vlad Tenev, that guy from Barstool Sports, and random crypto influencers — are promoting their products.

What they all have in common is that they are luring investors into a variety of risky fads meant to part investors from their money.

There are a few ways to tell if the person you are listening to is a bubble charlatan. For one thing, they can’t handle criticism of themselves or their product. Debate — one of the most important elements of price discovery, is not tolerated. To them, short sellers are market villains. They also dislike traditional valuation metrics, regulators who put guardrails around trading or promoting, and — to ingratiate themselves with retail investors — other rich people.

You can also find them shilling free advice on social media and constantly calling into CNBC to rant.

Chamath Palihapitiya, founder of now-defunct venture capital firm Social Capital, is skilled at all of those things.  His success stems mainly from being at Facebook early. Since then has perfected the art of raising money from people who should know better, and teasing a run for governor of California.

He is also especially talented at proposing things that already exist as if they are a genius revelation. Like taxes, for example: 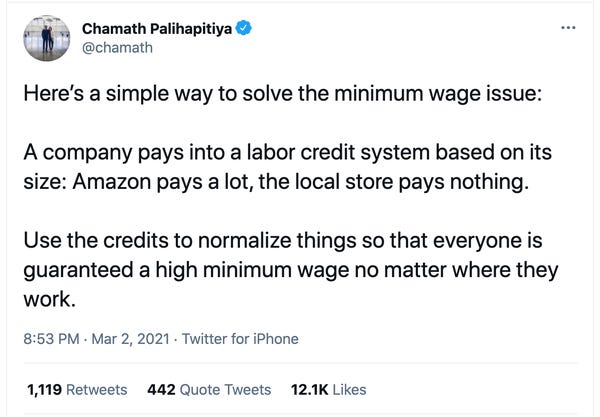 After a quick surge up IPOF is basically flat now. This shouldn’t surprise anyone who knows the nature of SPACs. A Harvard study found that while most SPACs “issue shares for roughly $10…by the time of the merger the median SPAC holds cash of just $6.67 per share.” Lucky for those who get in early, though, there is plenty of money to be made through financial engineering and ceaseless self promotion in the beginning of a SPACs life cycle.

Palihipitiya also took a healthcare company that he backs, Clover Health, public through a SPAC last year. It is now trading below its opening price after short seller Hindenburg Research published a damning report on the company. Hindenburg claimed Clover failed to disclose that it is being investigated by the Justice Department for Medicare payment fraud, among other things. After the report was released, Clover confirmed they had been contacted by the Justice Department but claimed the company had not violated any rules by not disclosing the inquiry. The company also disclosed that the SEC has opened an investigation into Hidenburg’s claims.

Did I mention that Palihapitiya hates short sellers?

Steal from the poor to give to the rich

Ranting about short sellers and “the little guy” on CNBC while hyping GameStop has made Palihipitiya a hero to the internet trading crowd. They are energized not only by duplicitous billionaires like him, but also fun kids making money on TikTok, random guys on Reddit pouring their life savings into failing companies, and no-fee trading app Robinhood.

Robinhood promises to give power to the little guy by “democratizing” trading. Whenever anyone on Wall Street promises to do that, you can be near-sure they are a charlatan. Nothing in this business is “free,” and selling the premise that little guys can swim with Wall Street firms using trading algorithms created by physicists is idiotic. Would you expect to win a pickup game with Lebron? No.

And yet that is what Vlad Tenev, the CEO of Robinhood, is selling all that with a side of “eat the rich.”

During last month’s Gamestop hearing in Congress he made it abundantly clear that he has no intention of fixing what caused trading restrictions on his addictive platform. To deflect from his company’s actual problems, Tenev suggested a technical regulatory change that every expert agrees would do nothing to fix the issues exposed by the GameStop saga and could actually hurt the “little guy” investor.

The real problem was the fact that Tenev’s gamified platform allows novice traders take on large amounts of debt to then invest with, and the fact that regulators want to make sure platforms like Robinhood have the cash on hand to keep things going if those risky traders go bust. So when Robinhood restricted users’ ability to buy meme stocks the market and its regulations were working exactly as they should. Tenev had to pause because he didn’t have the cash on hand to keep letting his users take huge risks. That’s how this works.

And yes, I know he raised $3.4 billion to deal with capital issues. I also know that — given the way people trade on his platform — that may not be enough.

In this bubbly market people will get their faces ripped off on Robinhood even when things are functioning perfectly well. And by people I mean that guy from Barstool Sports, noted bag holder Dave Portnoy. A bag holder is someone who is known up and down Wall Street for being bad at trading stocks. And Portnoy’s $700,000 loss on GameStop and other meme stocks (in a mere 48+ hours) cemented him in the annals of Bag holder History in January.

Lucky for him, though, trading is not the only lucrative business on Wall Street. Pumping nonsense — especially during a bubble — is an occupation that is always available for anyone who is incapable of embarrassment.

Portnoy seems to possess that quality. At the moment he is pumping an ETF that tracks sentiment for stocks on social media. Yes, the very meme stocks he took a bath on. What will happen to this ETF when people can’t be at home all day trading on their phones? It’s not hard to guess. But Portnoy will keep getting paid to promote it and the issuer will keep getting fees from Barstool fans who buy in.

Can we blame Portnoy for pumping this fad? Not entirely. He’s already made it clear to the world that he has no idea what he’s doing in the stock market.

There are other bit players too, like anyone who claims to be a crypto influencer. Candidly, anyone on Wall Street will tell you that crypto is a fun tool for speculation. Last month Treasury Secretary Janet Yellen said she worries about potential losses people could suffer trading Bitcoin, which she called a “highly speculative” and “volatile” asset.

Charlatans will have you believe that Bitcoin is the next gold, or a store of value, or a hedge, or a new kind of currency we’ll use after the Apocalypse, or a unicorn that poops glittery $50 bills. The beauty — as someone told me when I moderated a crypto panel back in 2018 — is that blockchain and crypto can be whatever you want because no one is sure what it is or will be.

Now, for anyone on Wall Street who has seen these characters emerge before, their unleashing on the market is like hearing a dinner bell ring. Time to eat.

For these charlatans it’s time to be everywhere — until suddenly they are not. Some will fail into oblivion, others will recover and reinvent themselves, just a few of them will make the right moves at just the right time and end up as a judge on Shark Tank. There is money to be made on all sides of a bubble. You just have to make sure that you’re on the right side when it pops.

How Google is creating its new offices

Improvised flamethrower modeled on an Elon Musk design among the weaponry found at US protests, documents focusing on the far-right reveal

In an attempt to expand and diversify its audience, the public radio of Ukraine has recently entered the world of podcasts. Listeners have been invited...