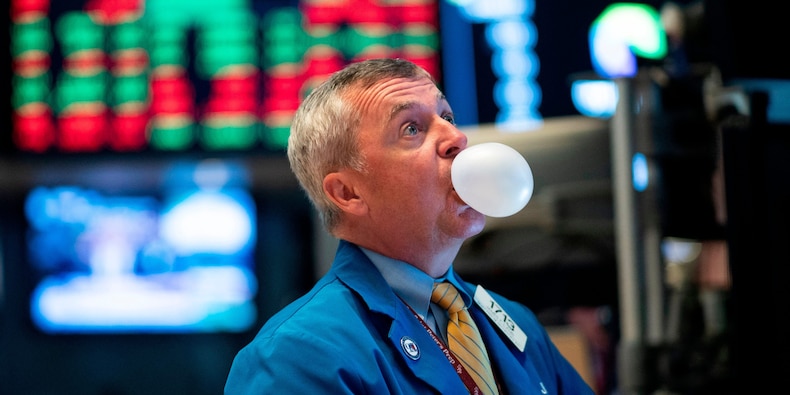 Americans are now holding a higher percentage of their net worth in stocks than ever before, the Wall Street Journal reported on Monday based on data from JPMorgan and the Federal Reserve.

US households increased their equity holdings to a record 41% of their total financial assets in April.

Nikolaos Panigirtzoglou, an analyst at JPMorgan, released the findings from data going back to 1952 that includes 401(k) retirement accounts. The analyst said appreciating share prices coupled with increased buying were the main factors for the elevated allocations.

The rise in interest in equity markets and the use of debt to invest in them comes amid a boom for retail traders.

New apps like Robinhood and Webull have taken the market by storm, adding millions of new investors and traders over the past few years.

Robinhood has grown so much it was able to more than triple the revenue it earns from payment for order flow in the first quarter of 2021.

The rise in revenue from active trading came after Robinhood added some 3 million new members in the first quarter of 2020 alone during the height of the pandemic, per Bloomberg.

A new study from the University of Western Australia found that trading activity among retail investors spiked during the pandemic as investors had more time and money to invest in online trading.

Robinhood and other trading apps have repeatedly graced the top of Apple and Google's app stores amidst the meteoric rise in retail trading.

And while many market commentators are cheering the inclusive move, some have issued warnings.

Warren Buffett warned about the self-confident nature of Wall Street and the new breed of retail investors in Berkshire Hathaway's annual shareholder meeting on Saturday.

"We were just as sure of ourselves, and Wall Street was, in 1989 as we are today. But the world can change in very, very dramatic ways," the 'oracle of Omaha' said.