J.K. Rowling praised the longtime head of the U.S. publisher of her "Harry Potter" books as an ally and early defender of the beloved fantasy series on Monday.

Richard Robinson, who led Scholastic Inc. for more than 40 years, died on June 5 at 84.

"Dick was a wise, kind and humane man, who leaves behind him an extraordinary legacy in the world of children’s literature," Rowling said in a statement Monday. "He was an early champion of Harry Potter and a stalwart support to me through the twenty-four years we knew each other."

Robinson presided over historic changes in the business and culture, whether the rise of digital media or the increased emphasis on diversity and scrutiny of the past.

Stocks in this Article

"We strongly believe our books and magazines need to address tough topics that are relevant, even if we get backlash or boycotted," Robinson told The Associated Press in 2020.

Robinson was a champion of literacy and free expression who in 2017 received a National Book Award for lifetime achievement and was honored two years later by PEN America.

Under his leadership, Scholastic became the world’s largest publisher of children’s books and has long claimed it distributes 1 out of every 3 children’s books in the U.S. The publicly-traded company’s estimated net worth is around $1.2 billion, down from over $1.6 billion in 2016 but well above a low of under $800 million during last year’s pandemic. 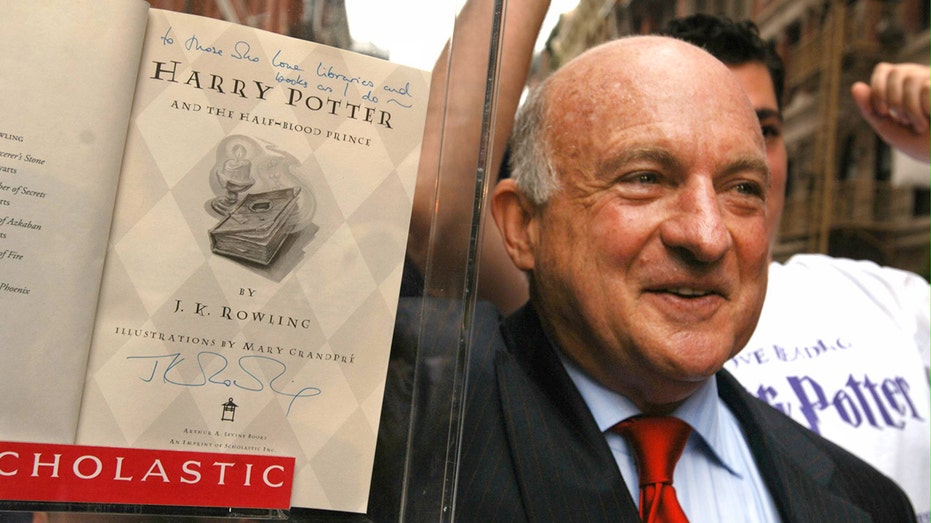 Richard Robinson, chairman, president and CEO of Scholastic Corp., rear, holds the first signed US edition of the book ‘Harry Potter and the Half-Blood Prince’ during its unveiling in New York, Friday, July 15, 2005. (Getty)

Robinson’s survivors include two sons he had with Helen Benham, from whom he was divorced.

A Pittsburgh native and graduate of Harvard College, he was the son of Maurice R. Robinson, who founded Scholastic as a classroom magazine in 1920. The younger Robinson worked as a high school English teacher and a bricklayer, among other jobs, before joining Scholastic as an associate magazine editor in 1962.

"I was going to be a teacher and a writer — joining Scholastic was never a consideration, and my father knew that," he said in 1997.

He rose to president in 1974, CEO in 1975 and board chair in 1982, the year of his father’s death, and vastly transformed the company. Robinson’s time at Scholastic was marked by global expansion into the book and education markets, and into television programming through "Clifford," "The Magic School Bus" and other series. He also endured financial ups and downs, even with the historic success of "Harry Potter," and occasional battles with censors who objected to books like "Potter," "Captain Underpants" and Alex Gino’s "George" as inappropriate for younger readers. Scholastic books often were in the annual list of "challenged books" that is compiled by the American Library Association.

Speaking to the AP last year, Robinson said that Scholastic aimed to educate readers in an even-handed way.

"We are dealing with issues like global warming, racial inequality in a way that doesn’t polarize the issue but gives points of views on both sides and is a balanced neutral position but not in a sense of being bland," he said. "Here are the arguments on the other. Here is what people are saying. Here are questions you can ask to formulate your own view."