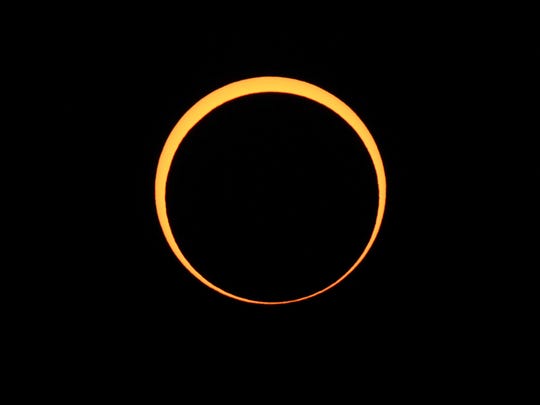 The moon appears to cover the sun during an annular eclipse of the sun on May 20, 2012, as seen from Chaco Culture National Historical Park in Nageezi, Ariz. (Photo: Stan Honda, AFP/Getty Images)

The path of the annular eclipse starts at sunrise in Ontario, Canada, (on the north side of Lake Superior), then circles across the northern reaches of the globe, EarthSky’s Bruce McClure said. “Midway along the path, the greatest eclipse occurs at local noon in northern Greenland and then swings by the Earth’s North Pole, and finally ends at sunset over northeastern Siberia,” he said.

While the U.S. will miss out on the “ring of fire” part of the eclipse, millions of people who live along the East Coast and in the Upper Midwest will get a chance to see a partial solar eclipse just after sunrise. 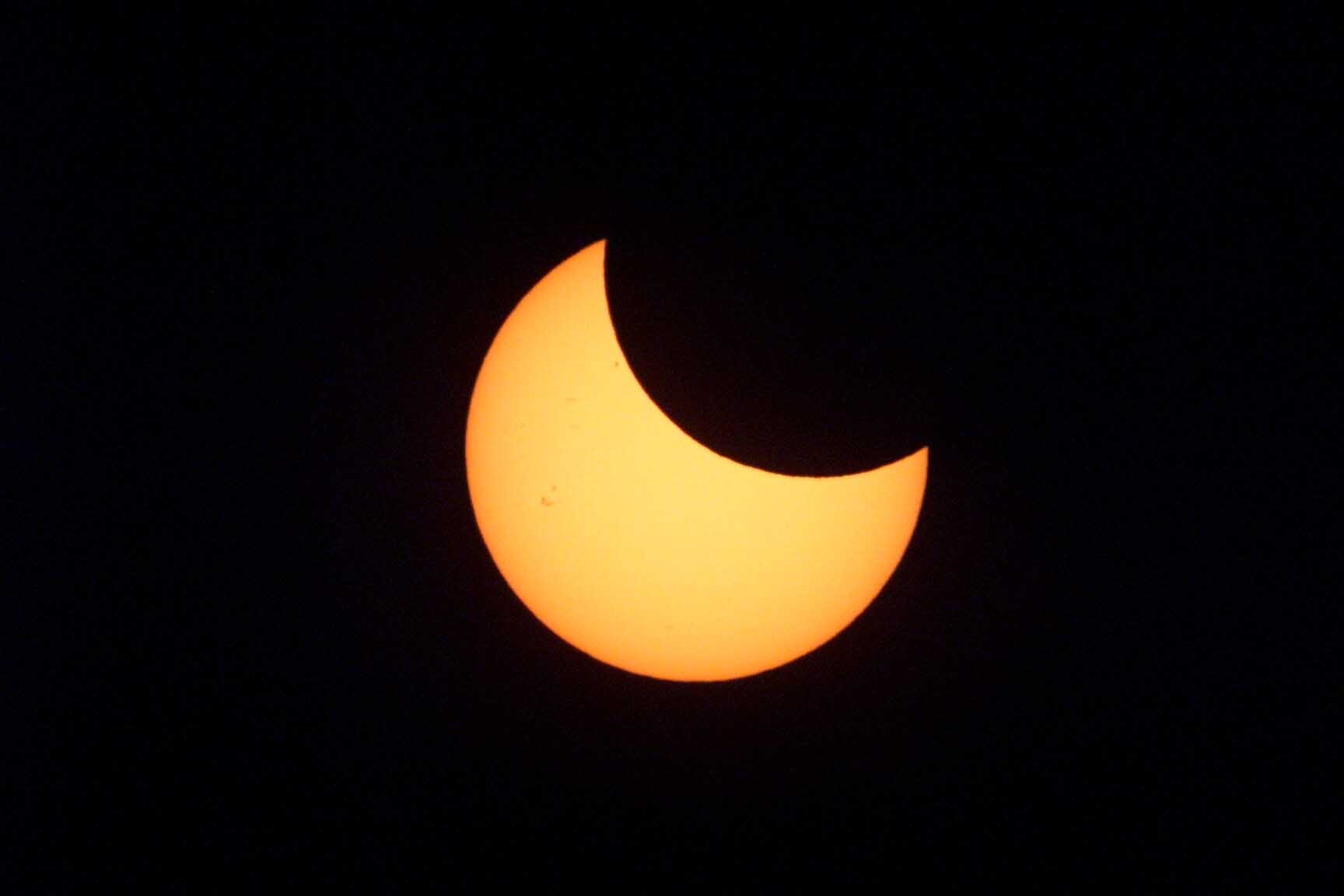 A partial eclipse of the sun appeared in the sky over New York on Christmas Day 2000. (Photo: Robert Deutsch, USA TODAY)

Where can you watch the partial eclipse?

The most ideally situated large metropolitan areas to view the partial eclipse at sunrise are Toronto, Philadelphia and New York, according to the Great American Eclipse website.

“Along the Atlantic coast, the very best view of a deep partial solar eclipse will be from the beaches of New Jersey. Tall buildings in New York City with unobstructed views in the direction of the rising sun will also have a great view,” the Great American Eclipse website said.

In Quebec, folks in Montreal and Quebec City will also have ideal views of the partial eclipse.

Observers of this partial eclipse will see a crescent sun as the moon passes in between the sun and the Earth, the Royal Astronomical Society said. People across northern Europe, Iceland, Greenland and northern Russia will also see the moon take a bite out of the sun on Thursday.

What to know: ‘Ring of fire’ solar eclipse will be visible in North America on June 10

So, what is a solar eclipse?

Sometimes as the moon orbits the Earth, it moves between the sun and Earth. When this happens, the moon blocks the light of the sun from reaching Earth, NASA said. This causes an eclipse of the sun, or solar eclipse.

During a solar eclipse, the moon casts a shadow onto Earth.

What is an annular solar eclipse?

In addition to the more familiar total and partial solar eclipses, sometimes annular eclipses occur, such as the one on Thursday. An annular eclipse is when the moon covers the sun’s center, leaving the sun’s visible outer edge to form a “ring of fire” or “annulus” around the moon. (The word “annular” comes from the Latin word for ring.)

Because the moon is farther away from Earth, it seems smaller, so it does not block the entire view of the sun. During an annular eclipse, the moon in front of the sun looks like a dark disk on top of a larger sun-colored disk. This creates what looks like a “ring of fire” around the moon.

According to Space.com, a fitting analogy is placing a penny atop a nickel; the penny represents the moon and the nickel is the sun.

Is eye protection necessary during the eclipse?

Yes, absolutely! “It is never safe to look directly at the sun’s rays – even if the sun is partly obscured,” NASA warned. “When watching a partial eclipse you must wear eclipse glasses at all times if you want to face the sun or use an alternate indirect method.”

Solar eclipse glasses must be worn at all times during an annular or partial solar eclipse to avoid the threat of blindness, so it can be a dangerous event if you’re not properly prepared. NASA warns to never look directly at the sun: It can permanently damage your eyes.

“It is only during the total phase of a total eclipse that it is completely safe to view the sun with the naked eye,” said eclipse chaser Fred Espenak, a retired NASA astrophysicist.

If you still have eclipse glasses around from the big 2017 “Great American Eclipse,” they should be fine for viewing Thursday’s eclipse, as long as they’ve been stored properly.

Where do I find solar eclipse glasses?

There are several reputable sites for purchasing good solar eclipse glasses, which should have a label that reads “ISO 12312-2,” as this is the approved safety standard for eclipse glasses, AccuWeather said. American Paper Optics is a good source, as is this list of reputable vendors from the American Astronomical Society.

How does the weather look for viewing the eclipse Thursday morning?

Unfortunately, the weather may not cooperate for ideal eclipse viewing in many areas, AccuWeather said.

Clouds will be a problem for some folks hoping to witness the celestial alignment, including those in some big cities in the mid-Atlantic such as Philadelphia and Washington, D.C., according to AccuWeather.

The forecast looks better farther north for Boston, as well as Canadian cities such as Ottawa and Montreal, although a few clouds could still cause some disruptions for onlookers there. Even better weather is in the offing for much of Atlantic Canada with a mainly clear sky expected on Thursday morning, AccuWeather said.

Areas farther west, such as Chicago and Minneapolis, will be able to see a small sliver of the sun covered by the moon right at sunrise, but it will not be nearly impressive as areas farther east.

When is the next total solar eclipse in the US?

The next total solar eclipse in the U.S. will be on April 8, 2024, and it will be visible along a path from Texas to Maine, weather permitting. Big cities in the path of that eclipse will include Dallas, Indianapolis, Cleveland and Buffalo, New York.

“The 2024 total solar eclipse will be a spectacular eclipse to witness,” expert eclipse photographer and eclipse educator Gordon Telepun told AccuWeather. “The path encompasses many big cities and therefore a large number of people.”