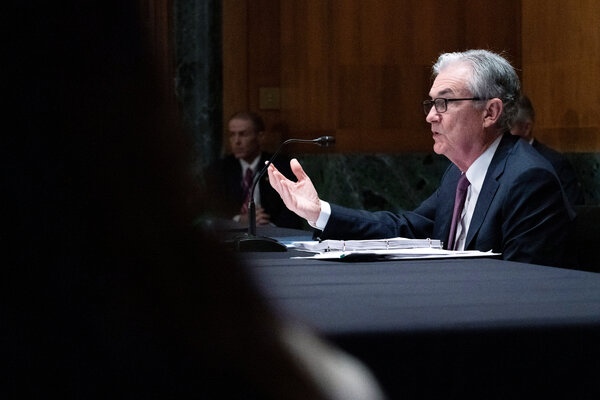 The week in cryptocurrency

Even crypto enthusiasts have mixed feelings about their culture and markets. So it’s no wonder that lawmakers and regulators are torn over digital assets, as developments this week made clear.

Cryptocurrencies have “completely failed” to become a legitimate payment system, the Fed chair, Jay Powell, said yesterday at a Senate hearing. He added that so-called stablecoins — cryptocurrencies whose value is pegged to the dollar or another asset like gold, with the idea of making them a predictable means of exchange — are dangerously unregulated. Central banks could step in and develop digital versions of their currencies, but Powell is “legitimately undecided” about the benefits of doing so, he told senators.

The Fed will put out a report on a digital dollar around September; the European Central Bank began a study of a digital euro this week.

“Smart legislation” is on the way “in the coming months,” Senator Cynthia Lummis of Wyoming, a Bitcoin holder and congressional crypto champion, said after the hearing. Ms. Lummis, a Republican, had pressed Powell to be precise about terms, warning against speaking about all digital assets interchangeably. “It’s important to be working from common definitions to have a clear legal framework,” Lummis said. Writing laws for the fast-moving industry won’t be easy.

And then there is Dogecoin. The token was created years ago as a joke against crypto culture, but it has recently minted millionaires, generated a big chunk of Robinhood’s revenue and even caught Powell’s attention at the Fed. Dogecoin’s co-creator, Jackson Palmer, forcefully denounced the cryptocurrency world in sweeping terms this week, and even those still in the industry didn’t entirely disagree.

Sam Bankman-Fried, founder of one of the largest crypto exchanges, FTX, called Dogecoin the “asset of the year” because it is a “reflection of our era.” When millions of traders can join forces online to push up the prices of joke cryptocurrencies or meme stocks, it alters the meaning of value. That phenomenon is arguably “bad for the world,” he told DealBook. Sitting next to a painting of the dog that is Dogecoin’s mascot, a gift he keeps by his desk, Bankman-Fried said: “This is the coin we deserve, for better or worse.”

Floods devastate Europe, and climate change is blamed. More than 90 are dead and hundreds remain unaccounted for after water from storm-swollen rivers rushed through Belgium, Germany and surrounding areas. The flooding, which lawmakers and activists attributed to climate change, came days after the E.U. announced its ambitious blueprint for moving its economy away from fossil fuels.

Companies resume giving to Republicans who opposed certifying the 2020 presidential election. American Airlines gave $2,500 to one such lawmaker in June, months after halting all corporate PAC donations in the wake of the Jan. 6 riots. Other companies that have restarted donations to election objectors, according to filings released this week, include Aflac, Cigna and UPS.

Social media takes fire from government and sports figures. Dr. Vivek Murthy, the U.S. surgeon general, called the rise of misinformation about Covid-19 on tech platforms “an urgent threat to public health.” And the English soccer star Bukayo Saka called out Facebook, Instagram and Twitter for failing to stop racist abuse aimed at him and several teammates after the team’s European championship loss.

Soho House disappoints in its first day of trading. Shares in Membership Collective Group, the parent company of the exclusive chain of clubs, opened below their offering price yesterday and closed down nearly 10 percent, making the debut a so-called busted I.P.O.

Who bids $28 million to fly to space, then backs out over “scheduling conflicts”? The original winner of an auction to fly with Jeff Bezos on a Blue Origin rocket next week dropped out, citing a curious excuse. That person will be replaced by Oliver Daemen, the 18-year-old son of a private equity executive who was a runner-up in the bidding.

Disney recently joined the growing ranks of companies that are shifting jobs out of California to cheaper places. But it’s not all one-way traffic: Many workers who left during the worst of the pandemic are returning to the Golden State.

Heading out: Disney said it will move about 2,000 jobs, mostly from its parks and products divisions, from the Los Angeles area to central Florida. (The plan has been in the works for two years, the company said.) The entertainment giant stressed that it wasn’t abandoning Southern California — the home of Disneyland and its movie and TV studios — as its base.

Coming back: Despite warnings of a great exodus from the Bay Area to more affordable locales like Ohio or low-tax cities like Miami, many tech workers are quietly moving back, The Times’s Kellen Browning reports. Said one returnee: “I felt like I was getting back to my life.”

In more California news: Los Angeles has reimposed indoor face mask requirements, even among the fully vaccinated, to fight an outbreak of the Delta variant.

“We just call it the variant.”

—Ed Bastian, the C.E.O. of Delta Air Lines, on how the airline refers to the form of the coronavirus known as the Delta variant.

The review of an $8 billion deal between the life sciences companies Illumina and Grail may point to a new playbook for antitrust enforcement. Regulators are looking to block the merger in the U.S. and Europe, a trans-Atlantic coordination that unlocks resources to question more deals as political pressure mounts to investigate whether corporations, particularly Big Tech, are squashing competition.

E.U. competition officials told The Wall Street Journal as much: They expect greater alignment with the Biden administration on antitrust enforcement.

The background: In September, the gene sequencing company Illumina announced that it was buying Grail, a maker of early cancer detection tests. (Grail was spun off by Illumina in 2016.) The companies operate in different parts of the supply chain, with Illumina upstream, making gene sequencing machinery, and Grail downstream, making a test that is run on those machines. The authorities in the U.S. say Illumina is the only provider of DNA sequencing that is used in combination with Grail’s tests. Regulators are concerned that the combined company would have the power to block research by Grail’s potential competitors.

Europe is moving to a full-scale review of the deal, Illumina confirmed to DealBook, after regulators rejected the companies’ proposed concessions yesterday. That works for the U.S. authorities, who have traditionally acted independently of their international colleagues. In May, the F.T.C. dropped a request to stop the merger in federal court, while proceeding with an internal case. Not litigating will save resources and Europe’s examination holds up the deal anyway, the F.T.C. said.

Can they do that? Illumina argues that the authorities in the E.U., in order to claim they have the right to examine the deal, are invoking a rule meant for countries with limited competition resources. The company is challenging the review in a European court. Illumina’s C.E.O., Francis deSouza, says Grail doesn’t operate in Europe yet, so if the review stands, that may open the door for Europe to intervene in deals between companies with limited or no E.U. presence.

“Perhaps we’re getting caught in anti-tech momentum,” deSouza told DealBook. Democrats in Congress recently proposed sweeping legislation targeting competition in the digital age and the White House issued a sprawling executive order on reining in corporate power. Olivier Guersent, a top E.U. antitrust official, told The Journal that his team has been in touch with regulators in the U.S. about recent cases “so they would benefit from our learning curve.”

Weekend reading: Boards for the new age of business

Shareholders are flexing their muscles. See, for example, the rising success of proxy proposals promoting environmental, social and governance (E.S.G.) issues, most notably when the environmentally minded activist firm Engine No. 1 won three seats on ExxonMobil’s board. Resistance is futile, say the authors of the new book “Talent, Strategy, Risk: How Investors and Boards Are Redefining TSR.”

The old approach to TSR — total shareholder return — needs a refresh. Obsessing over share prices and dividends distorts priorities, write Bill McNabb, the former chairman and C.E.O. of the fund management giant Vanguard; Ram Charan, a business adviser; and Dennis Carey of the consulting firm Korn Ferry. The new TSR should focus on people (talent), plans (strategy) and potential problems (risk), they write. “If the board can get the new TSR right, the old TSR will take care of itself.”

Of the three, talent should be a board’s focus, they say. Because people execute the strategies, as well as manage — and sometimes create — risks, directors must get involved in finding the right people for top jobs. “Listen to people who reframe the issues,” Charan told DealBook. “Diversity of thought brings value.”

E.S.G. is the big picture, not just a piece of the puzzle, the authors conclude. There is no single chapter devoted to the movement, they note, because the issues are interwoven in so many decisions. Diversity and sustainability cannot be hollow buzzwords: If investors are warning a company to take them seriously, directors better listen, said Charan. “Why did Exxon not think it was dead wrong?”

Intel is reportedly in talks to buy the chip maker GlobalFoundries for about $30 billion. (WSJ)

The buyout firm Hellman & Friedman raised $24.4 billion for its latest private equity fund, one of the biggest on record. (Bloomberg)

Sydney Airport rejected a $16.6 billion takeover offer, betting it will be worth more after the pandemic. (Bloomberg)

The autonomous vehicle company Aurora will go public by merging with a SPAC led by Mark Pincus and Reid Hoffman. (Reuters)

President Biden said his administration would warn U.S. companies about the risks of doing business in a “deteriorating” Hong Kong. (Bloomberg)

The E.U.’s highest court ruled that companies in Europe can ban women from wearing head scarves at work. (NYT)

U.S. lawmakers are signing onto the “Free Britney” movement. (NYT)

Best of the rest

Shares in Didi Chuxing tumbled (again) after Beijing regulators visited its offices as part of a review of the ride-hailing giant’s data protection. (CNBC)

The global computer chip shortage is fueling a car market frenzy and a debate over inflation. (NYT)

England is lifting most of its pandemic restrictions on Monday, but employers don’t expect workers to rush to the office. (Bloomberg)

Palm Beach is running out of mansions for sale. (CNBC)

We’d like your feedback! Please email thoughts and suggestions to [email protected]