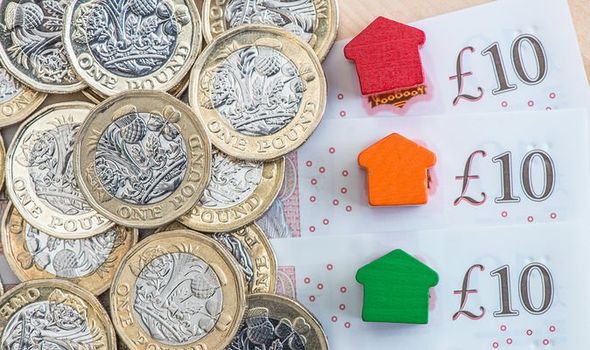 Sterling has been locked on a political rollercoaster with any milestone Brexit movement causing the pound to fluctuate. With Parliament on recess for the Easter break, the UK currency is likely to be moved by sets of data releases this week, as opposed to political updates. As of 9.11am UK time, the pound is trading at €1.1579, according to data from Bloomberg. Against the US dollar at the same time of writing, Sterling is worth $1.3102.

The currency remained largely unmoved from opening levels despite positive housing data revealing the average asking price on a home jumped by nearly £3,500 in April.

Delaying Britain’s exit from the EU has seen homebuyers become “bored of Brexit” with sellers unwilling to let uncertainty get in the way of sales.

Miles Shipside,  director, said: “The rise in new seller asking prices reflects growing activity as the market builds momentum, egged on by the arrival of Easter.

“Some sectors of the market and some parts of the country have strong buyer demand and a lack of suitable supply. 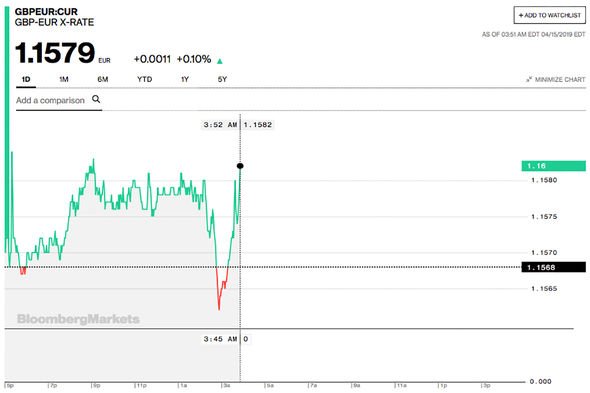 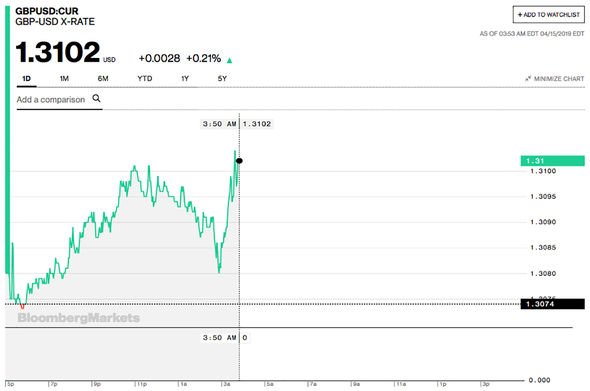 “However, on average, properties are still coming to the market at slightly lower prices than a year ago.

“It’s one of the most price-sensitive markets that we’ve seen for years, with buyers understandably looking for value or for homes with extra quality and appeal that suit their needs.”

Tomorrow will see the release of UK labour market data, of which average wages for February will be revealed.

Wages are expected to tick high compared to the previous month, which could send the pound rising against major currencies.

Henry Occleston at Lloyds Bank Commercial Banking said: “We are anticipating that average earnings will show a pick-up in the headline rate of income growth in the 3 months to February.”

This data will also include data on unemployment levels in the UK.

Other influencers for the pound will be retail figures, set for release on Thursday.

Current forecasts are expecting sales to have dropped in March from February, but show an increase year-on-year.

Inflation data for March is also due out mid-week.

Michael Brown, senior analyst at Caxton FX, said: “Sterling continues to mark time in the absence of any fresh Brexit-related news and with Parliament in recess this week, the busy economic calendar may provide markets with some relief from the political merry-go-round.

“Likely of most interest will be tomorrow’s UK labour market data which has held up well in recent months.

“Wages are expected to pullback slightly, though remain close to a post-crisis high, while unemployment is also likely to remain at historically low levels. Further signs of a tight labour market are likely to underpin the Pound.

“Other notable releases include Wednesday’s inflation numbers and Thursday’s retail sales figures, though the former is less significant than usual with the BoE likely on hold until after Brexit.

“Overall, Sterling may find some support if the data paints a relatively resilient picture of the UK economy.”