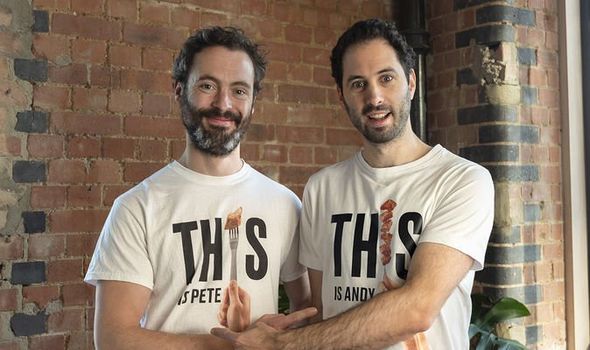 “This is the one – for better health and the planet,” say majority owners Andy Shovel and Pete Sharman who, since starting the UK business in 2019 just before the pandemic, have raised £21 million of investment and seen 200 percent year-on-year growth.

Backed by a spanking new innovation lab and testing centre they plan to open this spring in west London, sales of £20 million are forecast for 2022 as they double output and ramp up their portfolio of 12 products made of pea and soya proteins and plant fibres.

The patent-pending innovation, officially Fat 2.0, is olive-oil based, so rich in monounsaturated fats and antioxidants, and arrives after 500 trials during a year of development by THIS’s team of food scientists.

“There’s nothing like it on the market,” says Shovel who previously owned a meat burger business with Sharman before the serial entrepreneurs made the switch because of environmental concerns.

“Fat is not talked about enough when it comes to satisfaction from meaty products. It has a lot of complex structural integrity,” he explains.

“Fat 2.0 replicates the juiciness exactly, but with 89 per cent less saturated fat. It has the texture and tasty flavour without the downsides. We want to make food that does not make consumers feel they’re taking a virtuous meal off, Fat 2.0 brings us closer.”

Production will be through the company’s network of UK manufacturers. “It was good to discover the right tooling already existed, we use machines that normally make ice cream and confectionery products,” adds Shovel.

The protein-packed and high fibre ingredient is going first into the brand’s popular THIS Isn’t Pork meatballs and sausages which have 75 percent less fat than the average animal-based equivalent. Roll out in Sainsburys’ stores is being followed by Tesco this month.

The company now has a direct-to-consumer site and is listed in the major supermarkets including Waitrose and Ocado as well as hospitality chains such as YO! Sushi and CaffèNero who make it a feature in their menus.

The latest £11 million series A investment last summer was co-led by BGF and alternative protein backer Lever VC, and a further multi-million pound raise is planned for this year.

“Our sector has a lot of bandwidth and we’re at the easier end of the fund-raising spectrum,” says Shovel. “We share BGF’s long term, consistent approach. Next we’re looking to expand overseas and develop localised manufacturing hubs.”

Ever popular bacon has proved the biggest hit for THIS so far with its plant-based next generation version that offers consumers to have an easy way to reduce their meat consumption.

Now the company plans to unveil eight more mainstream products in 2022 with the aim of lowering prices which currently compare to the cost of premium meat.

Continuing to build on its strong marketing push and social media presence, THIS will expand the team from 60 to 75. Recruitment should not be a problem either as the firm has a £35,000 minimum salary pledge.

“This year is going to be a huge one for plant-based products, but they must be appetising and strike the right balance when it comes to taste, texture, nutrition and sustainability if we are to win over meat lovers – a big target for us,” adds Shovel. “We have a lot of opportunities for young ambitious talent.”