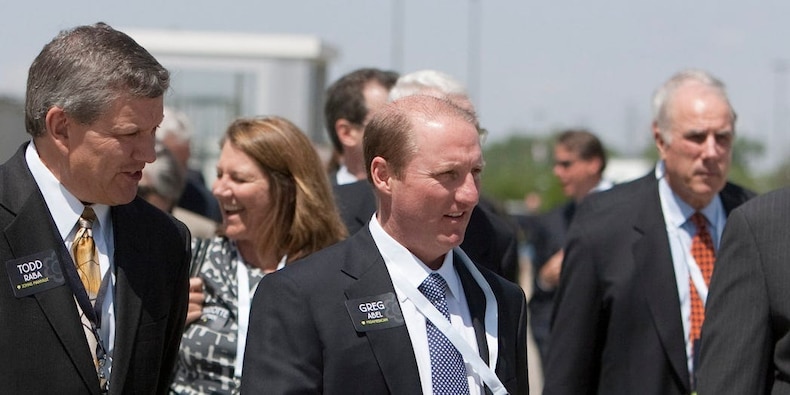 Berkshire Hathaway held its annual shareholder meeting on Saturday and Warren Buffett pointed to Greg Abel, the 58-year-old leader of Berkshire's non-insurance businesses, as next in line if and when the Oracle of Omaha steps down.

"The directors are in agreement that if something were to happen to me tonight it would be Greg who'd take over tomorrow morning," Buffett told CNBC on Monday.

Speculation about a successor to the famed billionaire investor began in 2006 when a then spry 75-year-old Buffett first discussed plans for his succession in an annual shareholder letter.

At the time, Buffet mentioned how he had hoped his long-time right-hand man, Charlie Munger, would take over the business, but noted that he needed someone younger to fill the role.

Buffet added that Berkshire needs "someone genetically programmed to recognize and avoid serious risks, including those never before encountered."

Now, Greg Abel has been selected as that person-and in the annual shareholder meeting, his comments prove he may be exactly the "genetically programmed" risk manager that Buffett had envisioned in 2006.

"I'm trying to understand what our competitors are doing, what's the fundamental risks around those businesses, how they're going to get disrupted," Abel said at this year's shareholder meeting. "It always comes back to are we allocating our capital properly in those businesses relative to the risk?"

Abel began his career working for PricewaterhouseCoopers before joining CalEnergy, a geothermal electricity producer, in 1992.

Then, in 1999, CalEnergy acquired MidAmerican Energy and adopted its name before Berkshire Hathaway picked up a controlling interest in the firm later that year.

Abel became the CEO of MidAmerican in 2008, which was renamed Berkshire Hathaway Energy in 2014.

In January 2018, Abel was named vice chairman of non-insurance operations for all of Berkshire Hathaway and appointed to the conglomerate's board of directors.

The Succession of the Oracle of Omaha

Greg Abel has been known as the likely successor to Warren Buffett by many on Wall Street for years now.

In 2017, Sarah DeWitt, an analyst with JP Morgan initiated coverage of Berkshire and said the energy executive was the "most likely" candidate to replace the "oracle of Omaha."

That suspicion was never confirmed by the conglomerate, however-until Saturday. In Berkshire's annual meeting, Abel was officially named as the successor to Buffett.

Warren Buffett's long-time right-hand man and current Berkshire vice chairman Charlie Munger said that he believes "Greg will keep the culture" that has made Berkshire so successful for decades.

During his reign, Buffett, who is now 90-years-old, has turned Berkshire Hathaway into a more than $630 billion business.

The conglomerate owns a share in everything from Apple and Coca-Cola to Bank of America and the United Parcel Service.

Buffett has been an ardent supporter of the American economy, and the stocks that track it, ever since he began investing back in 1942.

Based on what Buffett and Munger have said about Greg Abel, investors can expect much the same from the long-time Berkshire loyalist if and when he takes the reins.

Thoughts from the Street

Analysts, market commentators, and professors are mostly positive about Abel's prospects as the leader of Berkshire Hathaway. Here are a few reactions to the news of his selection.

1. "Abel, of course, does not have the charisma, personality, and reputation that Buffett built over decades, so he's not going to have that magnetism that Buffett has, but he exudes extreme competence and success. He has a very successful track record at Berkshire and I don't think shareholders can ask for anything more than that." David Kass, a professor of finance at the University of Maryland's Robert H. Smith School of Business, told Bloomberg.

2. "Greg is a natural successor to Warren Buffet and has been groomed for this post. Culturally it's a smart pick and one that should sit well for investors. That said, filling the shoes of a global icon and investing genius is a tough task and will have its share of challenges ahead. It's like filling in for Mantle or Gehrig in the Yankees lineup after they left," Dan Ives, managing director of equity research at Wedbush Securities, told Insider via email.

3. "The good news with Greg was he had the answers on his tongue. There was no question or ambiguity in his responses. Let's hope Charlie is right that the culture can be replicated." Ed Walczak, portfolio manager at Vontobel told The Financial Times.

4. Jim Shanahan, an analyst at Edward Jones said he suspects "Buffett disclosed this reluctantly." And said that "Abel's coronation is not exactly a surprise," but noted he has a "great deal of comfort" with Abel taking over the business, per Reuters.