Kyle Busch completed the NASCAR sweep at Kansas Speedway on Sunday afternoon by driving away from the Cup Series field in a two-lap dash to the finish.

Busch was the race leader on the last restart of the Buschy McBusch Race 400 and cleared the field by the exit of Turn 2. It was frantic in Busch’s rearview mirror.

Kyle Larson and Ryan Blaney nearly found trouble in the outside lane as Larson tried to shove Blaney forward. As they faded, Martin Truex Jr., Brad Keselowski and Chase Elliott surged forward, but it didn’t last long. Keselowski slid wide in Turn 1 and 2, impeding the path of Truex and Elliott and opening the door for Harvick to grab second place.

Busch led Harvick across the finish line for his first Cup win of the season. Keselowski was scored third, Matt DiBenedetto fourth and Elliott fifth.

"It’s cool to get everybody back to victory lane again this early in the season," Busch said. "To be able to get some of those points going our way now and hopefully – heck, I just remembered, the Buschy McBusch race. The Busch won it, what do you know, right on.”

Busch is the 10th different winner in 11 Cup races. The victory, the 58th of Busch’s career, is the first in the series for crew chief Ben Beshore. It is the second victory for Busch at Kansas.

Larson fell to 19th in the finishing order after his run-in with Blaney. Blaney finished 21st.

Busch took the lead for the final time off a shove by Blaney on a lap 257 restart. Christopher Bell spinning in Turn 3 on the same lap, collecting both JTG Daugherty Racing cars, brought the caution out that set up the run to the finish. 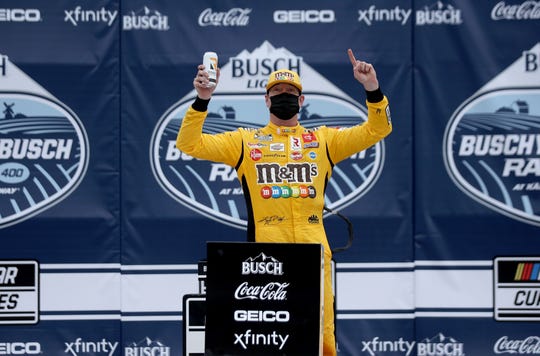