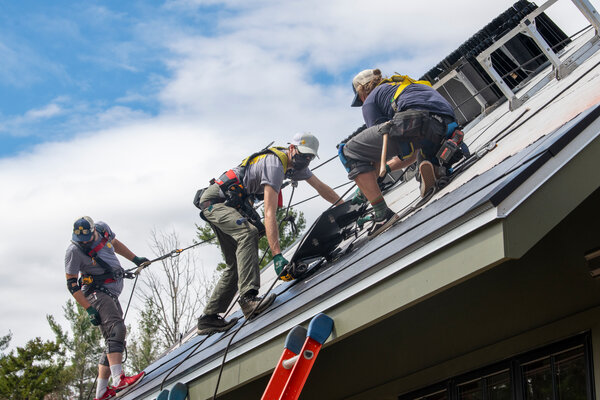 Tesla’s solar ambitions date to 2015 when it announced that it would sell panels and home batteries alongside its electric cars. A year later, Elon Musk, the company’s chief executive, promised that Tesla’s new shingles would turbocharge installations by attracting homeowners who found solar panels ugly.

After delays, Tesla began rolling out the shingles in a big way this year, but it is already encountering a major problem, Ivan Penn reports for The New York Times.

The company is hitting some customers with price increases before installation that are tens of thousands of dollars higher than earlier quotes, angering early adopters and raising big questions about how Tesla, which is better known for its electric cars, is running its once dominant rooftop solar business.

The shingles remain such a tiny segment of the solar market that few industry groups and analysts bother to track installations.

Tesla is not the only company to pursue the idea of embedding solar cells, which convert sunlight into electricity, in shingles. Dow Chemical, CertainTeed, Suntegra and Luma, among others, have offered similar products with limited success.

But given Mr. Musk’s success with Tesla’s electric cars and SpaceX’s rockets, Tesla’s glass shingles attracted outsize attention. He promised that they would be much better than anything anybody else had come up with and come in a variety of styles so they could resemble asphalt, slate and Spanish barrel tiles to fit the aesthetic of each home.

During a quarterly earnings call on Monday, Mr. Musk insisted that demand for Tesla’s solar roofs “remains strong” even though the company had raised prices substantially. He described the last-minute increases as a teething problem.

Customers are unhappy with the growing pains. Dr. Peter Quint was eager to install Tesla’s solar shingles on his 4,000-square-foot home in Portland, Ore., until the company raised the price to $112,000, from $75,000, in a terse email. When he called Tesla for an explanation, he was put on hold for more than three hours.

“I said, ‘This isn’t real, right?’” said Dr. Quint, whose specialty is pediatric critical care. “The price started inching up. We could deal with that. Then this. At that price, in our opinion, it’s highway robbery.”