The company announced Tuesday that its “Original Pan Pizza” is being completely remade, including a new cheese blend, sauce and a “newly engineered” pan for it to be baked in for a crispier crust. 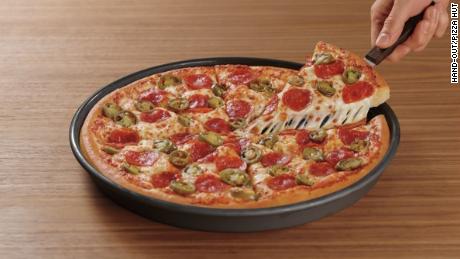 Pizza customers aren’t a loyal bunch, as people tend to gravitate to the company with the best promotion.

But taste matters too, which is why Domino’s scrapped its 49-year-old pizza recipe 10 years ago. It also rolled out new value offerings and technology for customers to track their orders. Earlier this year, Domino’s opened its 16,000th store and has grown by nearly 50% over the past five years. Pizza Hut has more than 18,000 restaurants worldwide.

Papa John’s is experimenting with sandwiches and new technology as it aims to make up for lost ground from its year of scandals.
Not to be outdone, Pizza Hut is expanding beer delivery program to 1,000 locations by the summer. It also developed insulated pouches designed to keep delivery pizzas up to fifteen degrees hotter.

Its new pan pizza recipe is part of the strategy.
“We know that taste is king for our customers, so we’re excited to roll out this new, state-of-the-art pan technology, combined with our perfected blend of cheese and sauce ratio,” said Penny Shaheen, Pizza Hut’s senior director of Culinary Innovation and Strategy, in a release.