Aldous Huxley, Cary Grant and Clare Boothe Luce – a grouping that might sound more like the set-up for a joke than the premise of a musical – were, in real life, proponents of lysergic acid diethylamide, what we’d now call early adopters. Though each of them tripped the light phantasmagorical during the 1950s, the writer, the movie star and the ambassador never actually came face to face, much less mind to mind, at least as far as we know, but they somehow should have, a situation the new, very original and often delightful musical Flying Over Sunset seeks to rectify.

With a book and direction by James Lapine (Into The Woods), music by Tom Kitt (Next to Normal) and lyrics by Michael Korie (Grey Gardens), Flying Over Sunset boasts a top-notch creative team and cast and a physical production that’s one of the most ravishing on Broadway. Carmen Cusack (Bright Star) as Luce, Harry Hadden-Paton (My Fair Lady) as Huxley and Tony Yazbeck (On the Town) as Grant sing and dance like a dream – or a trip, as the case may be – in service of a production that seeks nothing less than to transport an audience to another time (the easy part) and perhaps another dimension (trickier, much trickier).

Dreams, of course, don’t always survive the telling, and trips of any sort can wear thin. Destinations can be the most disappointing of all – lessons Flying Over Sunset learns the hard way. 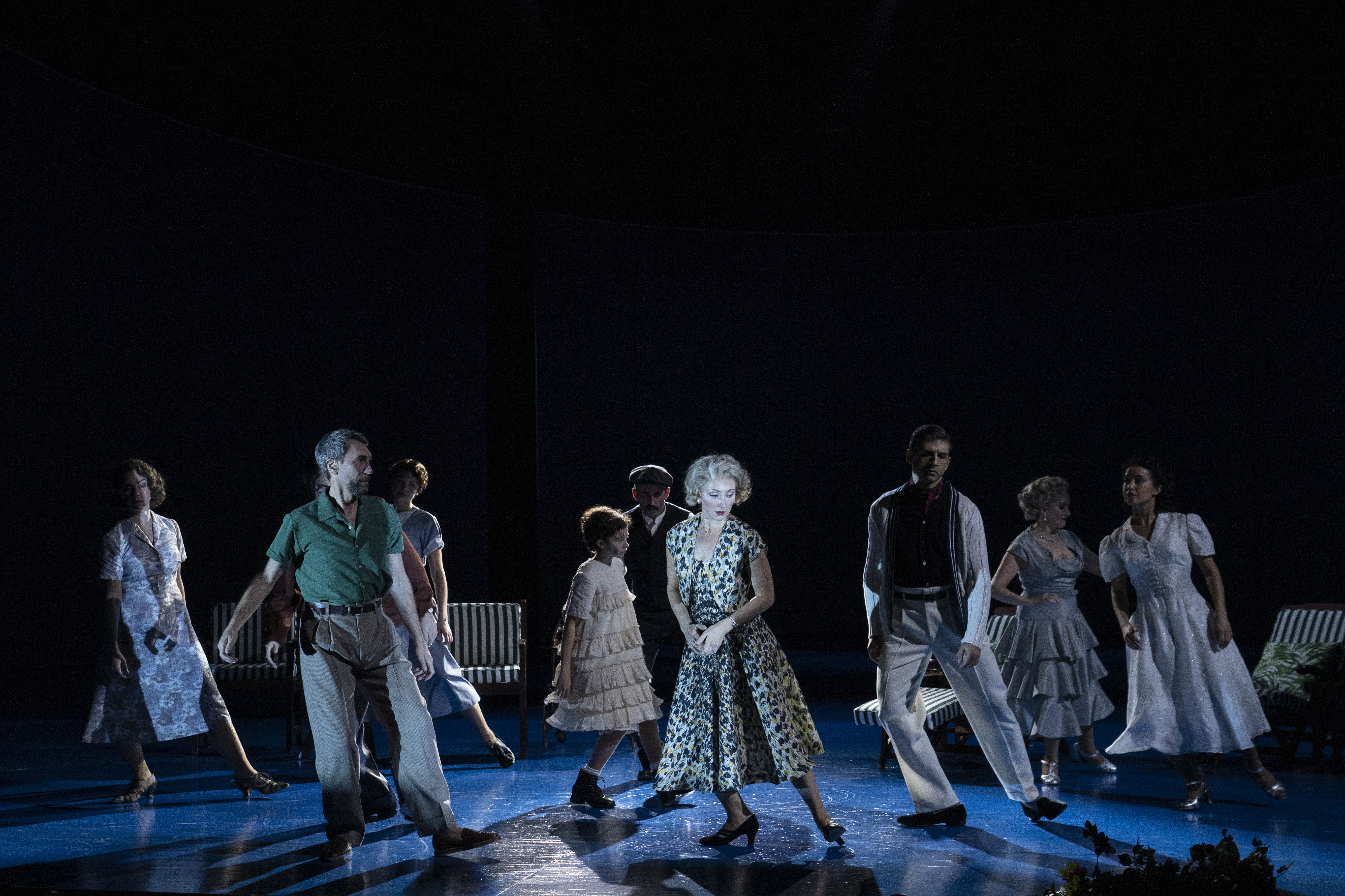 But first, the good news, and there’s lots of it. In a first-rate production by Lincoln Center Theater, Flying Over Sunset takes hold of our imaginations early.  We meet the three main characters – each given a brief, identifying soliloquy disguised as, say, a press conference (in Grant’s case) or a confirmation hearing (Luce) – as reality melds with a shuffling ensemble dance that looks like a vision and, with the slow clickety-clicks and sliding shuffles of tap shoes sounds like something emerging from a distance. Perhaps a distant memory.

From that introduction, Flying Over Sunset jumps quickly to deeper dives for each character (they don’t actually meet one another until just before intermission). First is Huxley, the great British writer who gave us Brave New World and whose The Doors of Perception launched trips for generations to come. We’re fully introduced to Huxley at a new, gleaming Hollywood Rexall drugstore, of all places, where he experiences LSD for the first time (historically accurate) in the company of his ailing wife Maria (Laura Shoop) and best friend Gerald Heard (Robert Sella), both of whom are experienced in the mind- and -spirit-expanding properties of the new and still-legal drug. 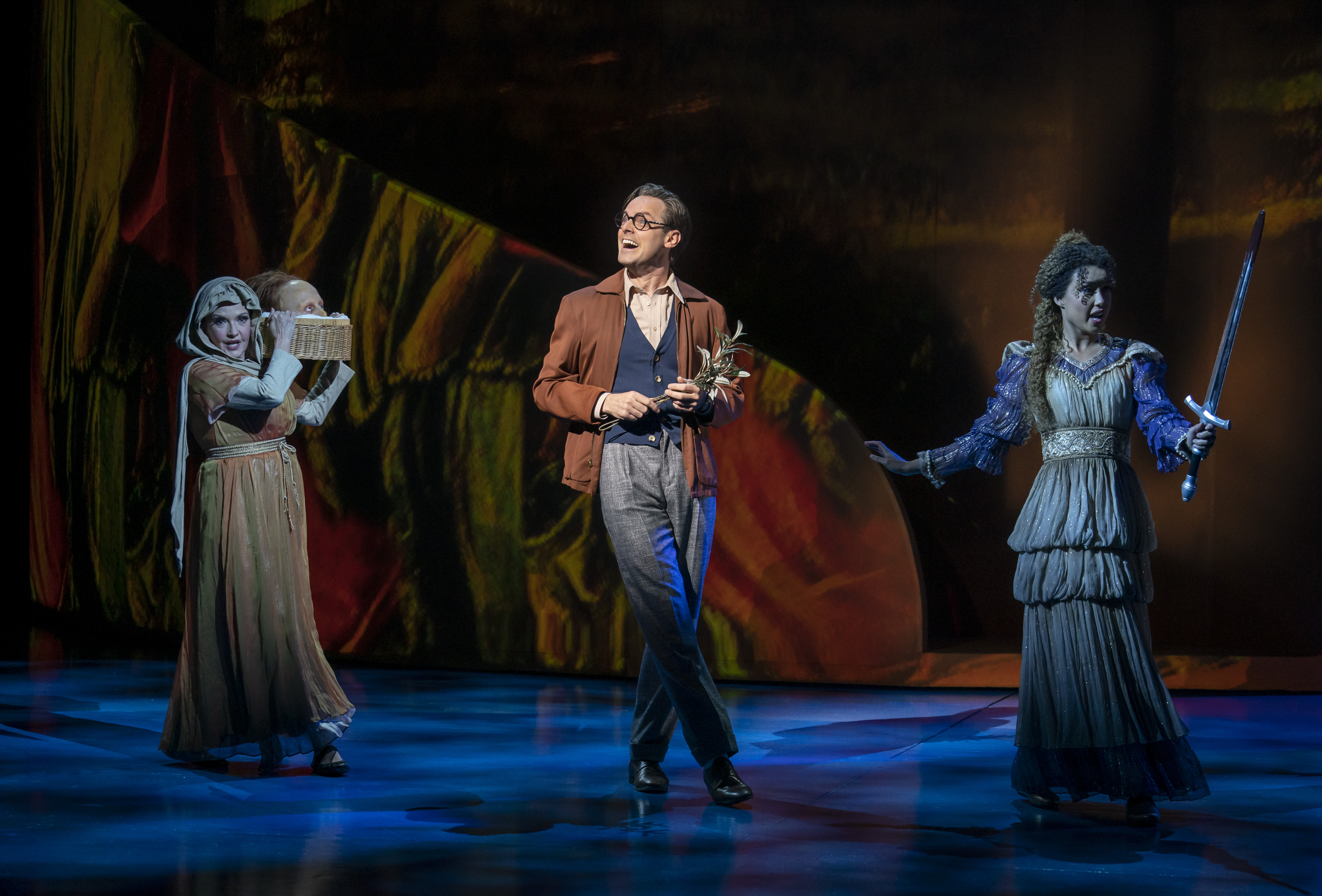 The depiction of Huxley’s first trip sets the musical’s format: The drugstore set – beautifully rendered, even in its initial realism, by scenic designer Beowulf Boritt – begins to shimmer and dazzle, with its mid-century light fixtures moving and changing colors, subtly at first and then no holds barred. As Huxley peruses an art book of Botticelli paintings, the curved walls of the production’s vast set turn full-on Italian Renaissance with projections of “Judith with the Head of Holofernes.” The painting’s characters then spring to life, with actors Kanisha Marie Feliciano and Michele Ragusa joining the exhilarated Huxley in “Bella Donna Di Agonia,” a sweepingly romantic number that melds musical theater with Italian opera. 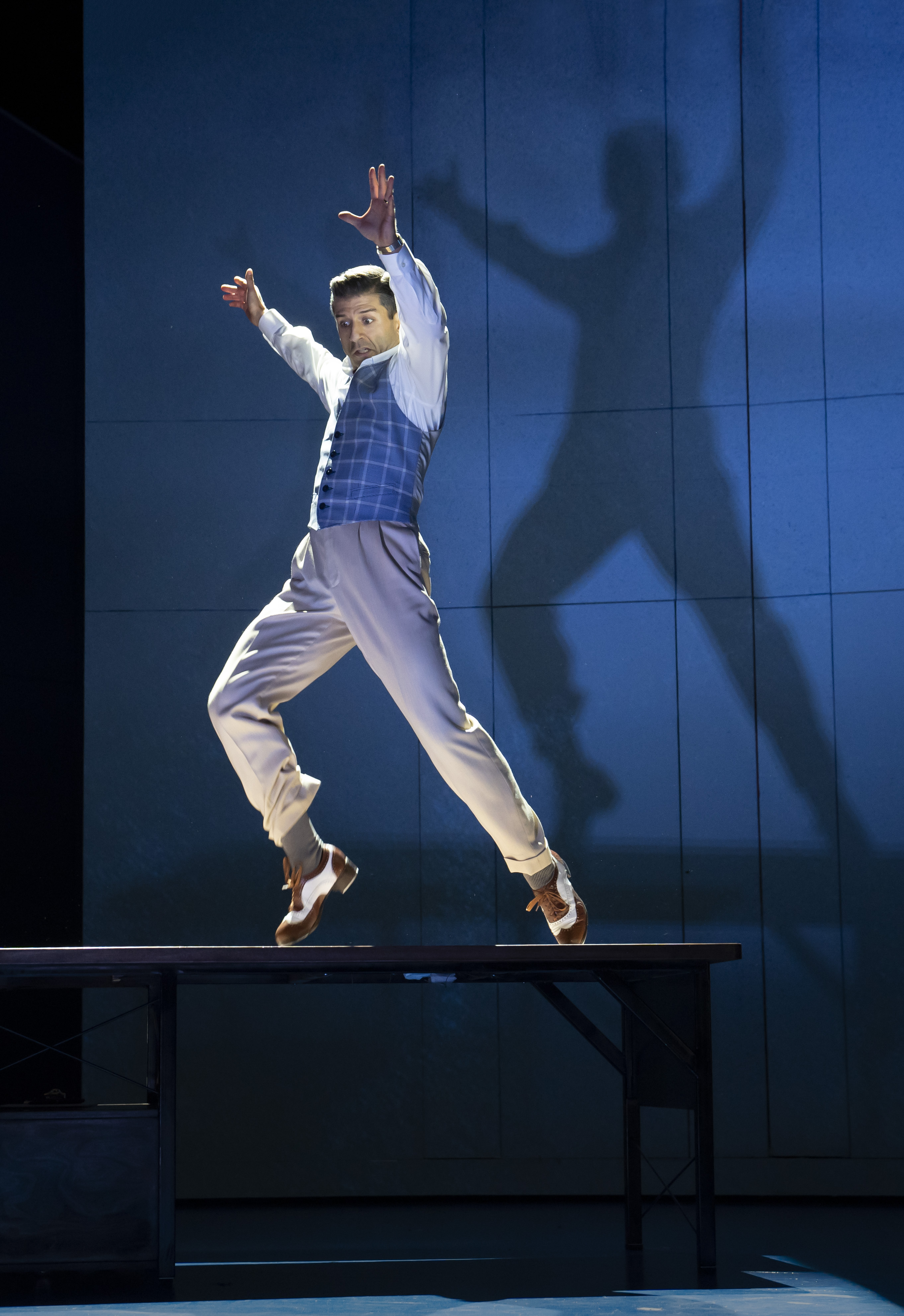 Sunset‘s musical styling make one of its many shifts with Cary Grant’s first big acid-drenched scene (in a psychiatrist’s office, again in keeping with history). After the soaring ballad “I Have It All” sets up the character’s central conflict – confident movie star on the outside, tangle of insecurity on the inside – Sunset offers up its most thoroughly delightful number with “Funny Money,” a song-and-dance tap duet with Yazbeck’s Grant and the remarkable young Atticus Ware as the movie star’s child self Archie Leach. Dressed in an urchin’s shabby ruffles – a female urchin, by the way, at his mother’s insistence and to his abusive father’s ire – little Archie is all Cockney bravado and busker panache, accustomed to masking poverty, beatings and loneliness beneath a show must go on front. It’s a trick that will hold the self-invented Cary Grant in good stead, until it doesn’t.

And finally we meet Clare Boothe Luce, the former screenwriter and reporter now married to the publishing giant Henry Luce and about to become, with considerable trepidation, the U.S. ambassador to Brazil. Sharing her first hit of LSD with her great friend Gerald – the same Gerald who accompanied Huxley to that Rexall – Luce reveals that she, like the recently widowed Huxley and the flirting-with-retirement Grant, is at a crossroads. Still grieving the losses of both her daughter and mother – each recently killed in a separate car accident – Luce, now a Connecticut doyenne, is unsure of whether she wants to proceed with a life in hardball politics. She fantasizes instead of revisiting her youthful glory days in Hollywood, a nostalgic reverie that provides the musical its title: Luce imagines herself flying over Sunset Boulevard and the paradise of Malibu.

The four main characters – Aldous, Cary, Clare and Gerald – come together for the first time when all have gathered for lunch at the famed Brown Derby, where, at Clare’s prodding, they all agree to reconvene at Clare’s rented beach house for an afternoon’s LSD-taking. It’ll be the first time any of them have engaged in a group trip, and like their solo efforts, the flight is undertaken in the spirit of mind-expansion, soul-searching and psychic growth.

That beachside acid trip forms the entirety of the second act, with the four characters baring their souls (some more easily than others) and confronting their demons – grief for Aldous and Clare, imposter syndrome for Cary and, for Gerald, a coming to terms with his sexuality (Cary Grant’s long-rumored bisexuality is ever-so-subtly suggested, though never really explored).

The second act is not without highlights, both musically  (the jaunty and humorous “Huxley Knows,” Clare’s explosive Sondheim-like “How?”) and visually. Clare’s imaginary trip to an Eden-like heaven, where she reunites with her daughter and mother, is as sumptuous as it is sad, and the wave-tossed near-drowning of “Three Englishmen” is a master class in stagecraft, with lighting, projections, dry ice and performance coming together for a thrilling scene. (The period-perfect costumes are by Toni-Leslie James, the lighting by Bradley King, sound design by Dan Moses Schreier and projections by 59 Productions.) 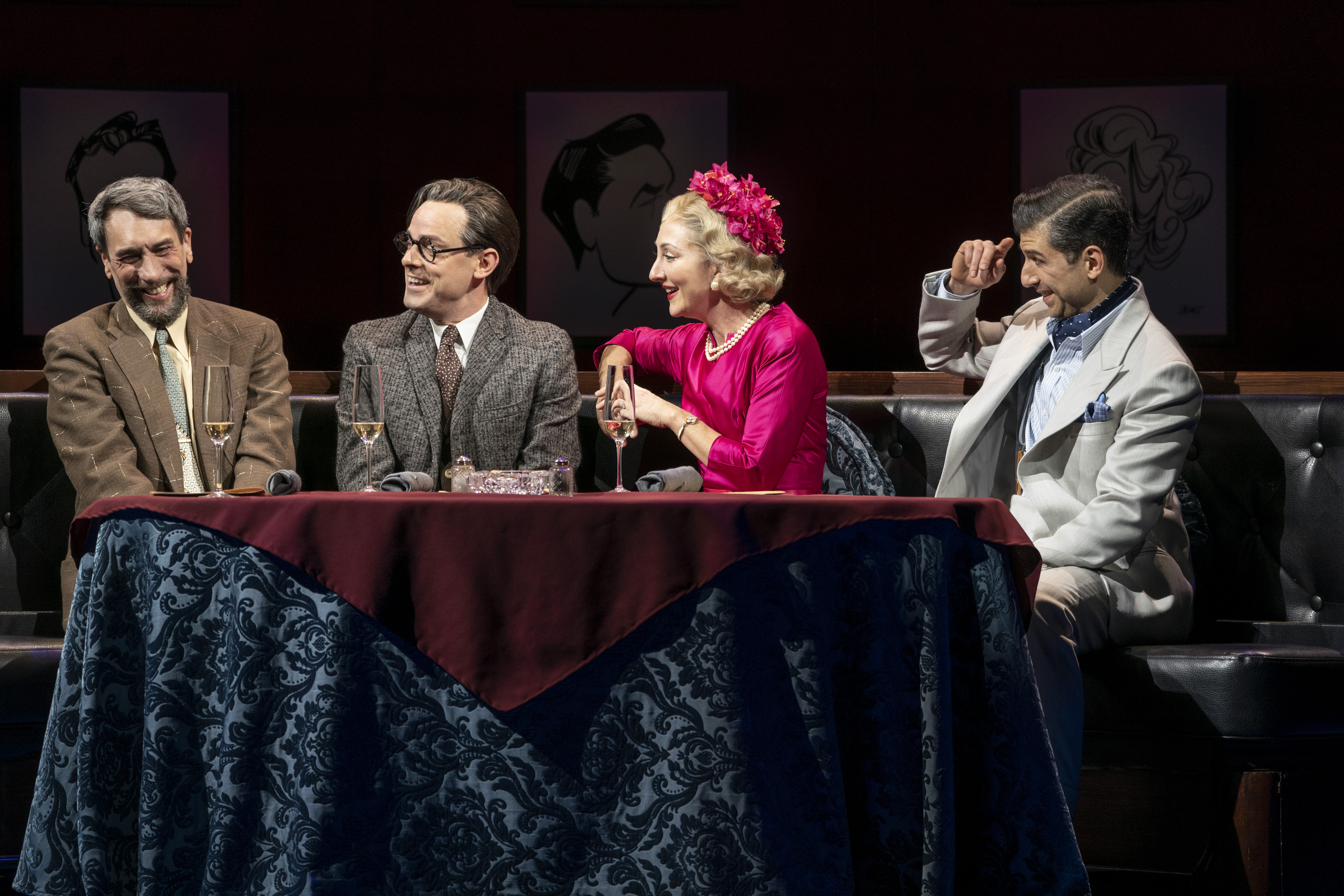 But there are lowlights too – Grant’s silly “Rocket Ship,” in which the movie star sings of imagining himself as a penis-shaped space vehicle (no points for being based on an actual Grant anecdote, or for presaging Jeff Bezos’ Blue Origin). And while Grant’s sexy tango-style dance with Sophia Loren (Emily Pynenburg) is both lovely and humorous, it seems an echo of the first act’s much better “Funny Money” tap pas de deux.

In fact, much of Act II feels like retread, repeating the themes and conflicts set forth in the first act without much expansion. Overlong and occasionally (but only occasionally) a bit tedious, the last third of the show loses its way. There’s some Freudian demon-facing, a lot of long-delayed (and fairly pat) self-acceptance and, in the case of the short-shrifted Gerald, a bit of ascendant fighting spirit, but for all the talk of communal experience and shared enlightenment, Flying Over Sunset just can’t quite figure out what these characters ultimately mean to, or do for, one another. They certainly make for smart and pleasant company, and there’s not a weak link in the cast, but one can easily imagine the characters’ individual psychic breakthroughs occurring without any crossing of paths. Their inward journeys are just that – inward, solo – and though it’s nice to trip in friendly environs, the human connections that would provide Flying Over Sunset its emotional payoff never quite land.