The claim: Georgia is removing Coca-Cola products from all state-owned buildings

Shortly after brands such as Coca-Cola condemned Georgia’s new voting law, posts surfaced online claiming that the state would remove the beverage giant’s products from all government buildings.

“Georgia removing Coke from all State owned buildings,” reads an April 6 Facebook post with 1,000 shares and over 100 reactions. “What do you think of that?”

Fact check:Coca-Cola CEO did not insult customers who were launching boycott

Georgia Republicans request removal of Coke products from their offices

The changes to Georgia’s election rules include ID requirements, a shortened period to request absentee ballots and runoff elections shortened to four weeks instead of nine.

The new voting law also tightens requirements for county elections supervisors, puts a ban on mobile voting buses for early voting except in emergencies and criminalizes offering food or drinks to voters.

Coca-Cola CEO James Quincey criticized the legislation in an April 1 statement and called it “unacceptable” and “a step backward” during an interview with CNBC.

Days later, a group of Republican Georgia lawmakers called for a boycott of Coca-Cola, however, the products are not being removed from all state-owned buildings.

Ann Moore, a spokeswoman for Coca-Cola, told USA TODAY in an emailed statement that the “rumor is not true.”

“There was one office suite of Georgia legislators who asked to have our products removed, which has been covered by media,” she said. “The beverages were complimentary – we offer them to lawmakers to provide to their constituents when they visit their representatives’ offices.”

In an April 3 letter to Kevin Perry, president of the Georgia Beverage Association, eight members of the Georgia House Republican caucus requested the removal of Coca-Cola products from their statehouse offices, USA TODAY reported.

“Given Coke’s choice to cave to the pressure to an out-of-control cancel culture, we respectfully request all Coca-Cola Company products be removed from our office suite immediately,” the letter reads. 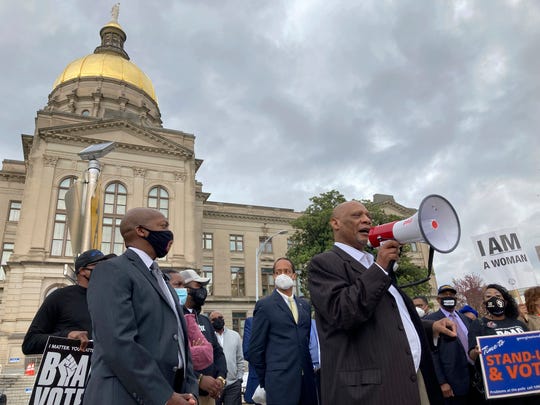 The Atlanta Journal-Constitution notes that Coca-Cola, which is headquartered in Atlanta, has provided free beverages and other hometown products to Republican and Democratic offices in Georgia for decades.

Fact check:Pouring Coca-Cola on pork does not make worms appear

The claim that Georgia is removing Coca-Cola from all state-owned buildings is FALSE, based on our research. A spokesperson for Coca-Cola confirmed that the claim is false. A group of eight Republican Georgia lawmakers requested the removal of the products from their offices, which were provided for free by the company.

Thank you for supporting our journalism. You can subscribe to our print edition, ad-free app or electronic newspaper replica here.

Our fact check work is supported in part by a grant from Facebook.