In a flat, arid expanse of China’s far west Xinjiang region, a solar technology company welcomed laborers from a rural area 650 miles away, preparing to put them to work at GCL-Poly, the world’s second-largest maker of polysilicon.

The workers, members of the region’s Uighur minority, attended a class in etiquette as they prepared for their new lives in the solar industry, which prides itself as a model of clean, responsible growth. GCL-Poly promoted the housing and training it offered its new recruits in photographs and statements to the local news media.

But researchers and human rights experts say those positive images may conceal a more troubling reality — the persecution of one of China’s most vulnerable ethnic groups. According to a report by the consultancy Horizon Advisory, Xinjiang’s rising solar energy technology sector is connected to a broad program of assigned labor in China, including methods that fit well-documented patterns of forced labor.

Major solar companies including GCL-Poly, East Hope Group, Daqo New Energy, Xinte Energy and Jinko Solar are named in the report as bearing signs of using some forced labor, according to Horizon Advisory, which specializes in Chinese-language research. Though many details remain unclear, those signs include accepting workers transferred with the help of the Chinese government from certain parts of Xinjiang, and having laborers undergo “military-style” training that may be aimed at instilling loyalty to China and the Communist Party.

The Chinese government disputes the presence of any forced labor in its supply chains, arguing that employment is voluntary. The companies named in the report either did not respond to requests for comment or denied any role in forced labor.

In a statement, a representative for the Chinese Embassy in Washington called forced labor in Xinjiang “a rumor created by a few anti-China media and organizations,” adding that all workers in Xinjiang enter into contracts in accordance with Chinese labor law. “There is no such thing as ‘forced labor,’” the representative said.

The report adds to a growing list of companies that have been accused of relying on coerced labor from Uighurs and other ethnic minorities in China, either in their own factories or those of their suppliers.

The United States and other governments have become increasingly vocal about forced labor in Xinjiang, including naming and shaming major corporations that operate in the region. The Trump administration has imposed sanctions on dozens of companies and individuals for their role in Xinjiang, including banning some exports from the region, which is also a major producer of cotton. On Dec. 2, it banned imports made with cotton produced by the Xinjiang Production and Construction Corps, a paramilitary group that American officials say uses forced labor.

Congress is also considering sweeping legislation that would ban all products with materials from Xinjiang unless companies certify that the goods are made without forced labor.

John Ullyot, the spokesman for the National Security Council, said that China’s campaign of repression in Xinjiang involved “state-sponsored forced labor” and that the United States would “not be complicit in modern day slavery.”

“The administration has taken unprecedented actions to prevent China from profiting off of its horrific human rights abuses,” he said.

Together, the solar companies named in the report supply more than a third of the world’s polysilicon, which is refined from rock and turned into the solar panels that end up on rooftops and utility energy projects, including those in the United States and Europe.

Government announcements and news reports indicate that solar companies often take in assigned workers in batches of dozens or fewer, suggesting that the transfers are a small part of their overall work force. Still, the assertions from Horizon Advisory imply that much of the global solar supply chain may be tainted by an association with forced labor. Such charges could hurt its progressive image and risk product bans from Washington.

Ian McCaleb, a spokesman for Jinko Solar, said the company “strongly condemns the use of forced labor, and does not engage in it in its hiring practices or workplace operations.” He said that it had reviewed the claims in the Horizon report and “found that they do not demonstrate forced labor in our facilities.”

China carries out a vast program of detention and surveillance of Uighurs, Kazakhs and other minorities in Xinjiang. Up to a million or more minorities may have been detained in indoctrination camps and other sites where they are forced to renounce religious bonds, and risk torture, assault and psychological trauma, Uighurs abroad and human rights groups say.

The Xinjiang government has promoted the labor transfer programs in parallel with the re-education camps, efforts that have ramped up drastically under the current leader, Xi Jinping. The government has uprooted many from farms to work in factories and cities, in the belief that steady, supervised work can pull minorities out of poverty and break down cultural barriers. Workers may have little choice but to obey local officials who oversee their move to distant towns and industrial zones to fulfill government-set quotas. 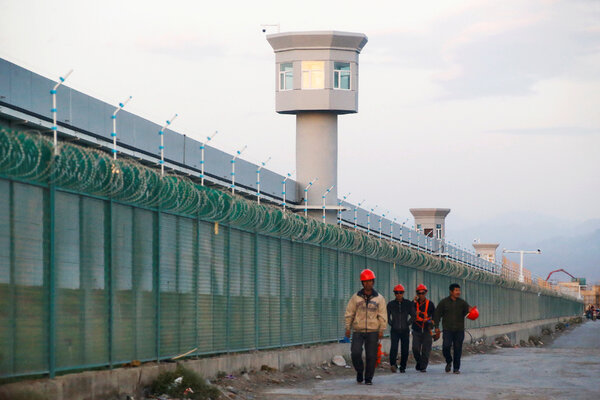 The growing scrutiny of the region has already prompted changes among some companies whose supply chains are entangled in these programs. Many textile and apparel companies that use cotton or yarn from Xinjiang have severed ties, including Patagonia, Marks and Spencer and H&M.

The solar sector could face similar pressure. The industry has deep ties to Xinjiang, which accounts for about 40 percent of global polysilicon production, said Jenny Chase, the head of solar analysis at BloombergNEF. Xinjiang’s polysilicon production increased rapidly over the past decade, mostly because of cheap electricity from local coal plants and other government support, Ms. Chase said.

That expansion has helped Chinese companies dominate foreign competitors, including in the United States. China produced 82 percent of global polysilicon in 2020, up from 26 percent in 2010, according to data from IHS Markit, while the U.S. share of production shrunk to 5 percent from 35 percent.

“I am concerned that forced labor may have been used in Xinjiang,” said Francine Sullivan, the vice president for business development at REC Silicon, a Norwegian polysilicon manufacturer with operations in the United States. The company shut a facility in Washington State, despite surging overall U.S. demand.

Xinjiang is known for low safety and environmental standards, Ms. Sullivan said, and forced labor “may be just part of the incentive package.”

Xiaojing Sun, a senior research analyst at Wood Mackenzie, said solar companies were starting to investigate their exposure to Xinjiang and reconfigure their supply chains to avoid the region if possible.

In a note to investors in October, analysts at Roth Capital Partners said the solar sector faced a “heightened risk of disruption” because of its ties to Xinjiang.

The Solar Energy Industries Association, the largest industry association in the United States, has called human rights abuses in Xinjiang “reprehensible” and strongly encouraged companies “to immediately move their supply chains out of the region.”

Since unfettered on-the-ground access to Xinjiang for foreign journalists and researchers is virtually impossible, the Horizon Advisory researchers do not provide direct testimony of forced labor. Instead, they present signs of possible coercion from Chinese-language documents and news reports, such as programs that may use high-pressure recruitment techniques, indoctrinate workers with patriotic or military education, or restrict their movement.

The report documents GCL-Poly accepting “surplus labor” from a rural region of Xinjiang last year. In 2018, according to an article on China Energy Net, a local news site, one of GCL-Poly’s subsidiaries also accepted more than 60 such workers.

A local subsidiary of Jinko Solar, Xinjiang Jinko Energy Co., received state subsidies for employing local Xinjiang labor, including at least 40 “poor workers from southern Xinjiang” in May, according to a local government announcement from July 2020 cited by Horizon Advisory.

On its public WeChat account, East Hope Group said that it had “responded to the national Western Development Call and actively participated in the development and construction of Xinjiang,” including constructing a polysilicon project in Changji prefecture in 2016, the Horizon report said.

Another subsidiary of East Hope, Xinjiang East Hope Nonferrous Metals Co., “accepted 235 ethnic minority employees from southern Xinjiang,” who were given training to make up for “low educational qualifications, weak national language skills and insufficient job skills,” according to a report on the company’s website.

According to Horizon Advisory, several solar companies also have ties to the Xinjiang Production and Construction Corps, which has been penalized by the Trump administration. In its 2018 financial report, Daqo New Energy said its Xinjiang facilities benefited from a lower cost of electricity because the regional grid is operated by a division of the Xinjiang Production and Construction Corps.

Amy Lehr, the director of the Human Rights Initiative at the Center for Strategic and International Studies, said that work programs that draw on Xinjiang minorities and offer companies subsidies for employing them are a “red flag” for forced labor.These programs may restrict workers from quitting, traveling or participating in religious services, pay less than minimum wage, and involve harsh or unsafe work conditions, as well as the threat of detention, according to Ms. Lehr’s research.

“The concern is that there is a potential for coercion, because of the level of surveillance and fearfulness,” Ms. Lehr said. Companies that source products from the region have “no way of knowing that you’re not being connected to forced labor,” she said.

Nathan Picarsic, a founder of Horizon Advisory, said what the firm had documented was likely “just the tip of the iceberg.” If Americans are buying solar panels made with materials from these Chinese companies, he said, “I would say you are complicit in perpetuating this Chinese industrial policy that suppresses and disenfranchises human beings.”

Ziglu announced that it has named Daniel Sale as its new Marketing Director. According to a recent press release, Daniel Sale, a senior marketer in...