China and the European Commission appeared close to announcing a landmark agreement this week that would make it easier for their companies to invest in each other’s economies. Then it hit another snag: A tweet by a top aide to Joseph R. Biden Jr. signaled that the president-elect was not happy about the deal.

The pact, nearly seven years in the making, remains a top priority of Chancellor Angela Merkel of Germany because it would give companies like Daimler and Volkswagen better control over their operations in China.

China, which has long been wary of allowing foreign companies greater access, seems eager to strike a deal now before the new U.S. administration can try to rally a united front against Chinese policies and actions, as Mr. Biden has pledged to do.

Ms. Merkel and other leaders have been pressing to complete the deal before the end of the year, while Germany holds the rotating six-month presidency of the European Council. Last week they even circulated 126-page draft that was largely completed except for unresolved issues of wording.

Their efforts, and an expected announcement on Tuesday, have instead run headlong into the growing animosity toward China and increasingly vocal opposition in the final rounds of talks.

In the European Parliament, the pact faces significant opposition from members who say it does not do enough to open China’s economy or to stop Chinese human rights violations.

In Washington, members of the incoming administration openly flagged that they hoped Europe would wait. 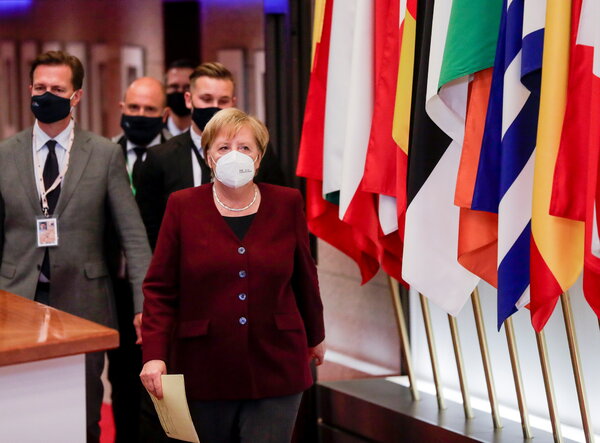 Mr. Biden’s choice as national security adviser, Jake Sullivan, wrote on Twitter on Monday that the new administration “would welcome early consultations with our European partners on our common concerns about China’s economic practices.”

The White House also weighed in. A spokesman for the National Security Council, John Ullyot, warned that any commitment from China “that is not accompanied by strong enforcement and verification mechanisms is merely a propaganda win” for the Chinese Communist Party.

The Trump administration has been trying, with mixed success, to encourage allies to follow its example in reducing economic and technological ties with China. As the talks in Europe have gained momentum in recent weeks, President Trump has instead been subsumed with trying to overturn the results of the presidential election, while many top advisers have been focused on the new stimulus bill or the response to the coronavirus.

If a deal comes to pass, it would be an unexpected diplomatic victory for China after a year in which its international standing plummeted over its obfuscation about the pandemic, its aggressive actions in Hong Kong and the South China Sea, and most recently a fierce dispute with Australia.

“The Chinese are keen to weaken any kind of trans-Atlantic alliance by pushing this through,” said Theresa Fallon, director of the Center for Russia Europe Asia Studies in Brussels.

After four years of dealing with a Trump administration that was by turns hostile toward Europe or simply indifferent, leaders in Brussels want to show that they can cope with China on their own. At the same time, they hope to rebuild relations with the United States under a Biden presidency.

Representatives of China and the European Commission, the European Union’s administrative arm, are continuing to negotiate and still hope to reach an agreement by the end of the year.

“Progress has been achieved in a number of areas,” the European Commission said in a statement. “There are still some important outstanding matters, and talks are continuing this week.”

According to the draft of the deal, a copy of which has been reviewed by The New York Times, a number of differences over language remained unresolved as of last week. The two sides had not agreed yet on what to call the pact. Europe favors “agreement,” while China prefers “treaty.”

In a section on investment and sustainable development, China had also asked to insert a phrase that it often uses to argue it should be held to different rules than industrialized nations. It says “the Parties recognize the differences in the Parties’ respective levels of development should be taken into account.”

The agreement also faces opposition for what it does not address. Critics have already complained that the deal does not do enough to open China’s markets, to honor previous pledges on trade and the environment or to address human rights abuses, including forced labor and the mass internment of Uighurs and other Muslims in the far western region of Xinjiang.

An investment agreement with China would require approval by the European Parliament, and opponents may have enough votes to block it.

“From the moment that the deal is signed, Europe will thus lose leverage not only on issues critical for future competitiveness, but also on fundamental value issues, ranging from human rights to the future of coal power plants,” a group of Chinese scholars in Europe wrote in an open letter as the agreement neared completion.

European officials consider the investment agreement as a relatively limited effort to ease commercial relations with China that did not have major geopolitical implications. The pact has strong support among European companies operating in China because it would lift requirements that they operate through joint ventures with Chinese partners and share sensitive technology. The agreement would also open up the Chinese banking market to European Union firms.

Brussels and Beijing have been discussing investment rules since the beginning of 2014 without making significant progress, in part because of China’s wariness about opening its economy to foreign competitors. The efforts faltered again this year, but the talks got back on track after the U.S. presidential election in November.

China’s leader, Xi Jinping, intervened directly, speaking with Ms. Merkel and President Emmanuel Macron of France. He told the French leader that relations between China and Europe were “gaining more global and strategic significance under the new circumstances,” according to the official Xinhua account of the call.

Officials and analysts in China and Europe said Beijing recently offered some concessions — enough to move negotiations forward, though not enough to assuage everyone. In China, the progress has been welcomed. A spokesman at the Ministry of Foreign Affairs, Wang Wenbin, said on Tuesday that with the agreement between China and Europe would “inject more stability into the world.”

Any finalized deal could be a significant blow to Mr. Biden’s ambitions on trade. He has sharply criticized Mr. Trump for antagonizing Europe and other allies with his global trade wars, and has promised to work more closely with like-minded governments to counter China’s unfair economic practices.

Although Mr. Biden has not clarified what such a partnership might look like, it could focus on extracting more commitments from the Chinese government, including on issues like intellectual property enforcement, state-owned enterprises and discrimination against foreign companies in China.

While a deal with China in the short term would not preclude other partnerships between Europe and the United States, it would undercut some of Mr. Biden’s rhetoric and demonstrate that Western companies are still fiercely competing for access to the lucrative Chinese market.

One of the main sticking points in the talks has been China’s willingness to abide by international standards for workers. Beijing has so far agreed only to “promote” better working conditions, without explicitly agreeing to observe standards on minimum wages and health and safety, according to the draft of the deal. Members of the European Green Party and other groups consider such a promise vague and unenforceable.

European views of China are conflicted. While China is an important source of investment and a critical market for industrial goods, acquisition by Chinese companies of assets like Volvo Cars or Kuka, a German maker of industrial robots, has prompted the European Union to give its member states more power to block investments.

As Chinese companies have become more sophisticated, they have also emerged as competitors in industries such as machine tools, previously dominated by German companies. With government backing, Chinese automakers are trying to use the transition to electric vehicles to become players in the international car market, a challenge to European carmakers.

Ms. Fallon, of the Center for Russia Europe Asia Studies, said that China would come out ahead even if the European Parliament scuppered the investment agreement by driving a wedge between the commission and the Parliament, and between Europe and the United States.

“They win no matter what,” she said.

U.S. holiday retail sales in 2020 were unexpectedly high compared to last year and came in significantly higher than the previous forecast, according to the...

MSNBC host Tiffany Cross brought on a Republican political strategist to discuss life after Donald Trump for the party, but it was apparent from the...

McDonald's is set to roll out a new Crispy Chicken Sandwich in the U.S., starting February 24, to expand its chicken offerings, which is growing...

Outflows are likely to continue, experts say, till such time as the markets see a significant correction.Ashley Coutinho reports. Equity schemes have seen outflows for...