LONDON — Six months after agents from Saudi Arabia murdered and dismembered the writer Jamal Khashoggi, companies are no longer shying away from the Arab kingdom.

The movie theater giant AMC says it is moving ahead with ambitious expansion plans for dozens of cinemas there. Hundreds of investors thronged last week to place $100 billion in orders for the first international bond sale tied to Saudi Arabia’s state-backed oil company. Google has a major data center in the works.

Many companies contend that they are, in part, helping to open up the deeply conservative society. A screening of Marvel’s “Black Panther” at a repurposed concert hall in early 2018 lifted a 35-year ban on movie theaters, with men and women attending the showing together.

But the math is simple: There is serious money to be made from working with the kingdom that lives off the world’s most profitable company, Aramco. A few weeks ago, Aramco disclosed that it generated $111.1 billion in net income last year. That was more than Apple, Royal Dutch Shell and Exxon Mobil combined.

“It is nothing personal,” J. Robinson West, the managing director of the BCG Center for Energy Impact, a Washington-based consulting unit, said about why investors and banks flocked to the bond sale.

To corporations around the world, the October death of Mr. Khashoggi, a columnist for The Washington Post who was strangled when he entered the Saudi Consulate in Istanbul, was a controversy to avoid. Business leaders pulled out of a high-profile, government-sponsored conference in Riyadh, and have since largely kept quiet about their companies’ ties to the kingdom.

But global businesses and Saudi Arabia’s de facto ruler, Crown Prince Mohammed bin Salman, recognize a need for each other.

Saudi Arabia’s fortunes fall and rise with the price of oil. Increasingly, it wants fresh investment and businesses to support its fast-growing population — 33 million people, most of whom are younger than 30 — and to winnow a nearly 13 percent unemployment rate. 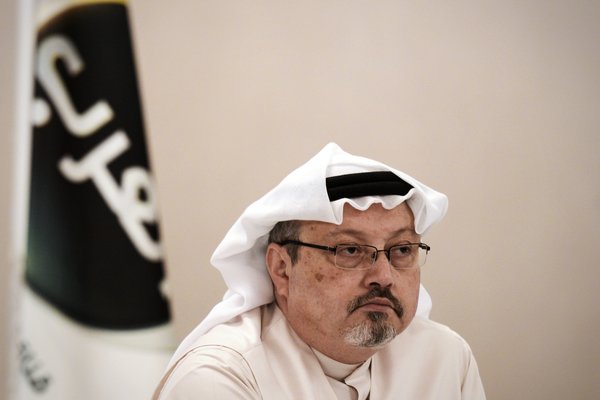 The crown prince rolled out a grand promotional campaign in 2016 to woo investors, but the results have been meager. Direct foreign investment fell to a decade low in 2017, just $1.4 billion, according to the Institute for International Finance, a research organization in Washington.

Investment fell, in part, because of concerns about how the kingdom — which increasingly means Prince Mohammed — confronts problems. In fall 2017, hundreds of Saudi businessmen and princes were detained, essentially under house arrest, at the Ritz-Carlton Hotel in Riyadh and other locations amid corruption allegations.

About a dozen female activists were arrested in May for campaigning for broader rights, including driving. Some are still being held on “suspicion of harming Saudi interests,” and their court hearings have been delayed multiple times, including this week.

“Things certainly got worse after the fall of 2017 and have not significantly improved,” said Karen Young, a resident scholar at the American Enterprise Institute in Washington, referring to investment levels.

But the promise of Saudi Arabia, which saw oil prices rise by a third this year to about $71 a barrel for Brent crude, has been too rich for many big companies to pass up. Google, JPMorgan Chase and the Japanese technology giant SoftBank are among the businesses that have kept Saudi Arabia as a partner.

“We thought long and hard, and concluded that the best course of action was to go forward,” Adam Aron, the chief executive of AMC, said in an interview, describing his company’s decision to open at least 40 new theaters there over the next five years.

“It’s the right thing to do for the people of Saudi Arabia,” he said this month. “They have been deprived of going to the movies for decades.”

Google has been working on a Saudi data center, its first in the Middle East and an important hub for its cloud computing services, for more than a year. Revelations about Mr. Khashoggi’s killing had not derailed its plans. When asked about its business with the kingdom, Google said it had signed a memo of understanding with Saudi Aramco in early 2018 “to explore potential establishment of cloud services to serve our customers in the Middle East.”

“There are no further updates to share at this time,” the company added.

JPMorgan’s chief executive, Jamie Dimon, canceled an appearance at the Riyadh conference in October, but showed up to pitch Saudi Aramco’s bond deal to investors in New York two weeks ago.

The investment firm Blackstone is still planning to spend money from a $40 billion infrastructure fund, of which $20 billion is meant to come from Saudi coffers, according to a person briefed on the matter who was not authorized to speak publicly about the firm’s investment plans.

And SoftBank, whose nearly $100 billion Vision Fund for technology investments counts the Saudi government as its biggest backer, has had little difficulty crafting deals using Saudi cash. It has participated in 20 investments since the Khashoggi news emerged, according to data from S&P Global Market Intelligence.

Some analysts said that floating Aramco’s bonds was a shrewd move by the crown prince.

Aramco raised $12 billion from its first-ever bond offering on the international market. Investors placed tens of billions of dollars in orders on the same day that the State Department barred 16 Saudis from the United States, for their suspected role in killing Mr. Khashoggi.

“Everyone in Saudi will be celebrating that they have actually pulled this through and made it a success story,” Ayham Kamel, head of Middle East at Eurasia Group, a political risk firm, said of the bond deal.

Many Western companies were tight lipped about their continued investment in Saudi Arabia for weeks after Mr. Khashoggi disappeared.

But in November, SoftBank’s chief executive, Masayoshi Son, publicly articulated what many corporate titans have quietly used as their justification for working with the kingdom. “As horrible as this event was, we cannot turn our backs on the Saudi people as we work to help them in their continued efforts to reform and modernize their society,” Mr. Son told analysts and investors at an earnings presentation in Tokyo

Companies have also taken cues from the Trump administration, which has repeatedly stressed that it considers the crown prince a crucial ally in a long-awaited Middle East peace proposal and other issues.

Saudi Arabia is likely to be active, not only as a place to invest but as a borrower and an investor. The country’s sovereign wealth fund, the Public Investment Fund, has assembled a nearly $300 billion portfolio of assets that includes stakes in technology companies like Uber and the electric carmaker Lucid.

Its chief, Yasir al-Rumayyan, said in February that the fund planned to open investment offices in New York and San Francisco as it stepped up investments.

Still, some companies have decided to back away.

Endeavor, the Hollywood talent agency, returned a $400 million investment from the Saudis this year and severed its relationship with the kingdom’s leaders. The British entrepreneur Richard Branson, who returned from a 2017 visit to the kingdom wowed by Prince Mohammed’s vision, recoiled after Mr. Khashoggi’s murder. Mr. Branson suspended his directorships in Saudi tourism ventures and cut off conversations with the Public Investment Fund.

In the unlikely event that more Western companies follow suit, the kingdom has a contingency plan: working increasingly with allies in Asia.

Countries including China, South Korea and Thailand have become key customers for the Saudis as the United States reduces its dependence on imported oil because of domestic shale production.

In turn, the Chinese oil giant Sinopec has become a high-profile investor in the kingdom, with a refining joint venture with Aramco and a research and development facility at a science park called Dhahran Techno Valley, in eastern Saudi Arabia. The science park represents an effort by the Saudis to create a technology hub around Aramco and the nearby King Fahd University of Petroleum and Minerals.

Other companies listed as tenants on the park’s website include Halliburton, Honeywell, Schlumberger, Emerson Electric, General Electric and Baker Hughes, a G.E. company.

On Monday, Aramco said it was spending $1.25 billion for a stake in Hyundai Oil Bank, a South Korean refiner, creating what it called a “dedicated outlet” for Saudi crude.

The question now is whether and how Saudi Arabia can use the momentum from the Aramco bond sale. “For people to invest in Saudi Arabia, they need a belief that this country is moving in the right direction,” said Roger Diwan, a vice president at IHS Markit, a research firm. “The last 12 months have not been stellar.”

An earlier version of this article misstated the given name of the Eurasia Group’s head of Middle East. He is Ayham Kamel, not Ayahm.