New York (CNN Business)The White House on Monday offered a solution to surging meat prices: an action plan that includes investing $1 billion of American Rescue Plan funds to boost competition in the industry and promises to ramp up regulation and enforcement of anticompetition laws. But some experts say the move is unlikely to offer relief at the grocery store right away.

The Biden Administration’s investment, which includes grants, loans, money for training, new labeling rules and ways for farmers to report anti-competitive concerns, is designed to spark competition in the meat processing industry, which is dominated by a small number of massive companies. The White House argues that the concentration in the sector is chiefly responsible for higher prices for consumers. More competition will lead to lower prices, according to the administration.
“The big meat processors, by virtue of little competition, have more market power to name their price,” a senior White House official told CNN Business.

Skeptics say that the proposed solution may be too simplistic, and is unlikely to reduce prices — at least in the near term.

It’s true that the vast majority of the meat processing market is controlled by just a few players. But that’s been the case for decades, said James Mitchell, assistant professor in the Department of Agricultural Economics and Agribusiness at the University of Arkansas.
“It’s been about the same for the last 20 years,” he said, arguing that consumers would have noticed price spikes well before 2020 if the highly concentrated industry was to blame. Others, including the US Chamber of Commerce, echoed that sentiment.
Instead, Mitchell said, recent price spikes are largely the result of the same pressures contributing to inflation in other sectors: Namely, labor shortages and supply chain issues. Beef prices in November were up 20.9% from a year earlier, according to the US Department of Labor. 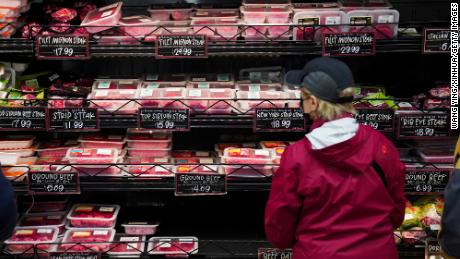 “It’s pandemic-induced labor challenges. It’s pandemic-induced logistical supply chain management issues,” Mitchell said. The recipients of the White House’s investment “are still going to face the same labor issues” he added. “So that’s not necessarily going to change, or fix the cost issue that consumers are facing at the grocery store.”
“Labor remains the biggest challenge,” Sarah Little, spokeswoman for the North American Meat Institute, a trade group that represents meat and poultry processors, said in an email. “Our members of all sizes cannot operate at capacity because they cannot employ a long-term, stable workforce.”
Higher demand has also led to higher prices, said Adam Speck, senior livestock economist at IHS Markit.
“The price increases are the result of exceptional demand for meat at home during the effects of Covid,” he said. On top of that, “Covid restrictions at plants (increased social distancing measures and safety protocols since Covid) are slowing the line speeds as well as increasing the costs for meat processors,” and contributing to higher prices on shelves.
Speck said that if demand stays elevated, “it could take well into 2023 for prices to normalize.”

Some welcomed the White House’s intervention.
“Industry consolidation has had a significant negative impact on rural America,” Scott Blubaugh, president of the Oklahoma Farmers Union, said in a statement. He added that he hopes the move will help “provide a more level playing field.”
Changes to the industry “will take time,” Blubaugh told CNN Business, adding that he thinks the move “will lower the prices eventually.” Overall, he called the White House’s plan a “game changer.”
But others say it’s not clear that more money will lead to a more competitive industry.
“I’ve done some research about this … trying to find out how markets will perform if there is what I call an intervention by the government,” said Azzeddine Azzam, professor of agricultural economics at the University of Nebraska-Lincoln.

Azzam found that “investments that go to meat processors really are not going to make that much difference,” given the high concentration in the industry.
The government’s actions “will help in the medium term,” said the senior White House official. “Is it the case it will take a little bit of time for smaller and growing processors that we aim to help to gain market share? Yes, that’s clearly the case.”
Source: Read Full Article