EXCLUSIVE: A day before the 20th anniversary of the opening of the Guantanamo Bay Detention Center, Cinema Libre Studio announced the acquisition of a documentary about one of the most famous men to be held at the U.S.-operated prison.

Guantanamo Diary Revisited recounts the experience of Mohamedou Ould Slahi, a citizen of Mauritania, who was imprisoned at the Guantánamo Bay facility from 2002 to 2016, accused by American authorities of aiding al Qaeda. He was never charged with a crime. Slahi told his story in Guantanamo Diary, a memoir that was adapted into the 2021 film The Mauritanian, starring Jodie Foster, Benedict Cumberbatch and Shailene Woodley.

Cinema Libre Studio intends to release Guantanamo Diary Revisited, directed by journalist John Goetz, in North America on March 29. But on Tuesday the studio will present a virtual sneak preview of the documentary two decades to the day after the Bush administration opened the Gitmo prison in the wake of the 9/11 attacks. The administration chose the site on the southeastern tip of Cuba to house and interrogate alleged “enemy combatants” in the loosely-defined Global War on Terror (the U.S. controls the area comprising the Guantánamo Bay U.S. Naval Base, but technically does not hold sovereignty over it, thus limiting the access of prisoners detained there to redress in U.S. courts). 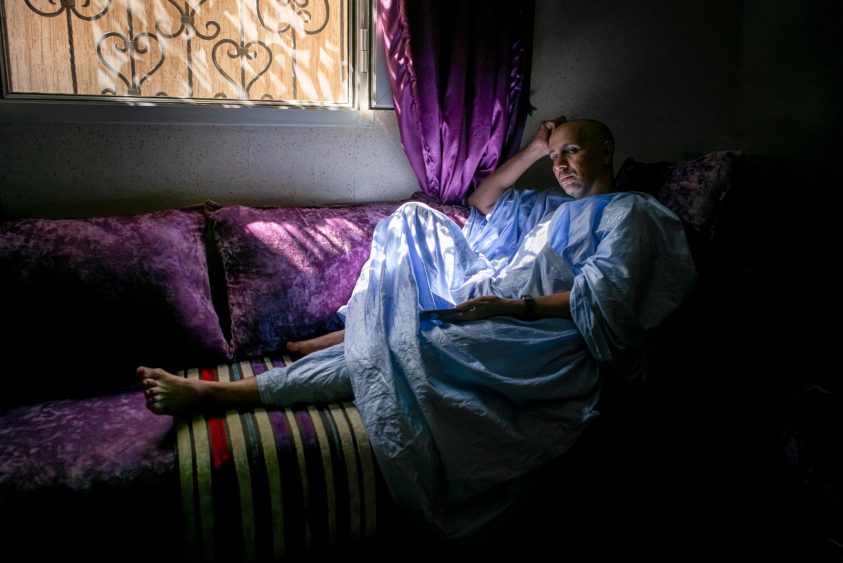 Slahi wrote in his book that he was tortured in the facility, as were other prisoners, and subjected to sexual humiliation and other inhumane treatment. The Periodic Review Board, comprised of civilian representatives of the Pentagon, Homeland Security, State, and Justice departments and other executive branch offices, granted Slahi release in October 2016, after nearly 15 years behind bars.

Slahi returned to his native Mauritania, the West African nation. The documentary originated with his desire to meet up with his captors and interrogators again, not out of a desire for revenge but something more like reconciliation.

“Some of you guys mistreated me, even tortured me,” Slahi said. “But I am telling you wholeheartedly that I have forgiven you. I hold no grudge against you guys. Honest to God. I invite all of you to my house so we could drink tea and talk about the past.”

Intrigued by that invitation, Goetz helped arrange the encounters. As the director told This America Life host Ira Glass in an October 2021 edition of the radio program, “[Slahi] wasn’t finished with what happened to him.”

Philippe Diaz, chairman of Cinema Libre Studio, developed a keen interest in Slahi after the publication of his memoir.

“I read Guantanamo Diary the moment it was released,” Diaz commented, “as I always thought the plight of innocent men captured and tortured in CIA black sites and at Guantanamo was unimaginable. Slahi and the other detainees are the ones who inspired me to write and direct my next feature I Am Gitmo. We were in the midst of shooting it when we heard about this documentary and we knew we had to acquire it.”

Cinema Libre Studios, with support from Pasaca Entertainment, is partnering with 10 human rights organizations for a “day of protest” on the 20th anniversary of the Guantanamo Detention Center opening, “to share the truth about the notorious prison.”

In addition to the free virtual screening of Guantanamo Diary Revisited, Tuesday’s events include the 11thannual Close Guantanamo Now vigil outside the federal building in downtown Los Angeles, a demonstration starting at noon local time that will feature remarks by speakers from the ACLU of Southern California, Code Pink, American Muslims for Palestine, Jewish Voice for Peace, and CAIR (Council on American Islamic Relations), among others.

A free virtual preview of Diaz’s I Am Gitmo will be held in the afternoon, followed by a panel discussion (more information here). The narrative feature portrays “the story of a Muslim school teacher who is accused of involvement in 9/11 and transported to Bagram Air Base and then to Guantanamo Bay, Cuba, where he is relentlessly interrogated and tortured. Though the claims are false, he learns he can be held indefinitely due to his enemy combatant status and his interrogators’ testimony will decide his fate.”