Bitcoin could officially be out of the woods after an unidentified buyer purchased a whopping $1.6 billion worth of the asset on Wednesday, leading to price spiking by over 8% in just under 15 minutes.

According to Cryptoquant’s C.E.O King Young Ju, Bitcoin’s insane run to $56,500 was ignited by an anonymous buyer purchasing a huge amount of Bitcoin via market orders.

“Someone(s) bought up $1.6B worth $BTC via market orders in just 5 minutes. Short liquidations seem relatively smaller like $17M at that time. This is more like whale buying, not cascade liquidations”. He tweeted.

This colossal purchase was also reflected on Coinbase’s Premium Gap chart,  which shows the gap between Coinbase Pro price (USD pair) and Binance price (USDT pair) indicating a strong spot buying pressure from Coinbase when the premium is high.

The last time markets saw such a huge purchase was in February 2020 when Elon Musk announced that Tesla had purchased $1.5 Billion worth of Bitcoin, igniting a spirited bullish run that saw price almost double in April.

$52k Hurdle Taken Out, One More To Go

Following the abrupt surge, Bitcoin is now well above $52,800, a major psychological resistance area last visited by bulls in early September. It shall be remembered that this price zone played out as most significant support during May’s mayhem, acting as support more than once even as pressure mounted on Bitcoin’s price following massive dumping.

A break and close above this price are significant to the entire crypto community as it is expected to hold strong support henceforth, laying a foundation for the price to soar.

With this resistance taken out, Bitcoin has recouped its trillion-dollar market cap, surpassing that of Facebook, and now the focus is affixed on price taking out April’s ATH of $64,854 even as $59,500 presents minor resistance.

There has been an increase in exchange activity as people continue to buy Bitcoin in anticipation that price will surge during this year’s Q4 as it has been the norm.

According to data from Glassnode, 2.35M BTC has also been added by Long Term Hodlers to their holdings since their supply bottom out in March. In the same duration, only 180k coins were mined meaning that these hodlers have held 13 times more coins than were produced via fresh issuance over the last 7 months, which is bullish. 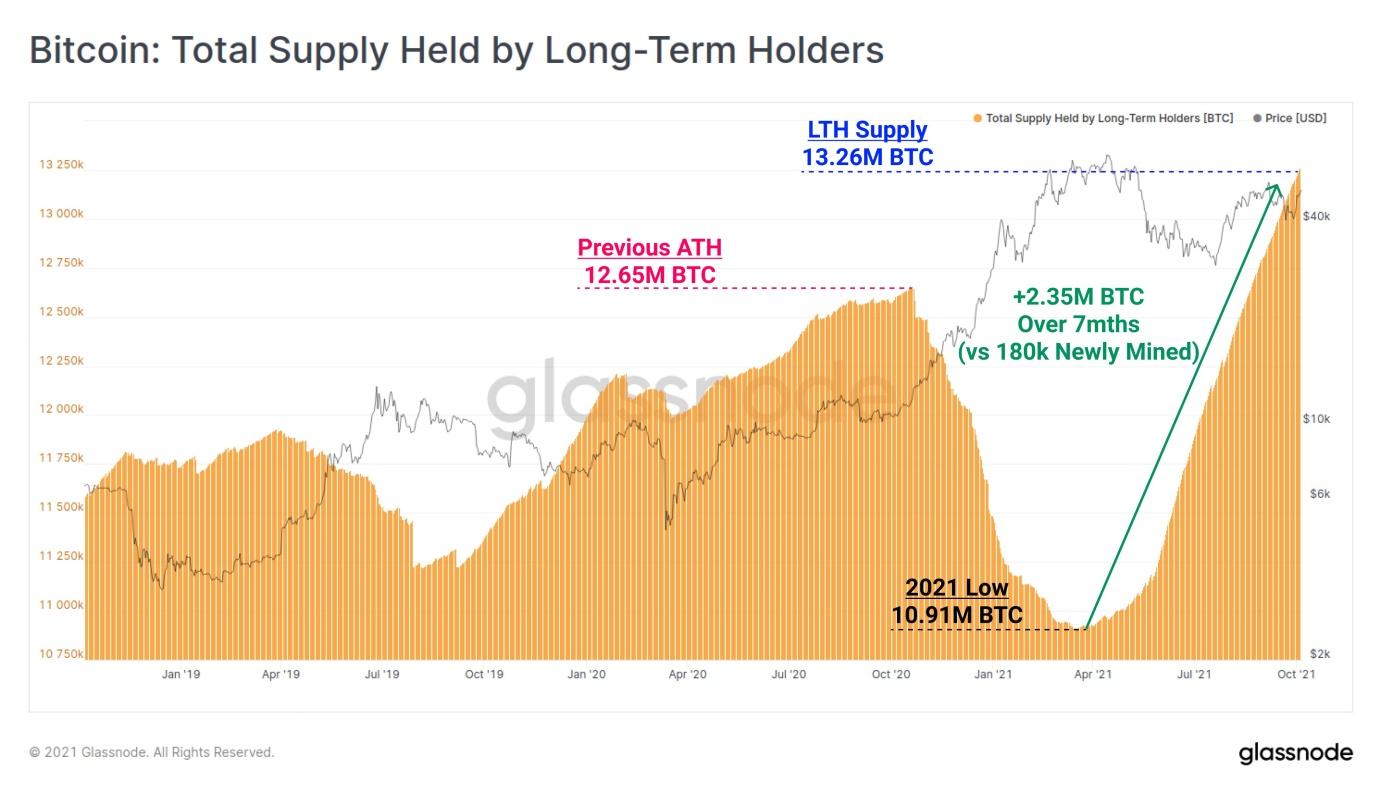 At press time, Bitcoin’s price is trifling with the $54,167 level with more upside expected in the week.