The heady run-up in cryptocurrency prices last December also magnified the divergences in returns between them. According to a new research report by Bitwise Asset Management, the difference in returns between the top- and bottom-performing coins tracked by Bitwise’s HOLD10 Index rose to 784.9% in December. The average price difference between the top- and bottom-performing coins over the entire year was 300.1%.

Bitwise’s report, entitled “The Case for Diversification Within Crypto Investing,” tracked the price of top 10 most valuable cryptocurrencies over a year, starting from March 2017. During that period, three coins – Ripple’s cryptocurrency XRP, its counterpart Stellar’s XLM, and Chinese coin NEO – provided the maximum returns to investors. Together, they were responsible for the maximum returns to investors in nine out of the 12 months tracked by Bitwise. (See also: The Black Swan Risk In Cryptocurrency Markets).

Typically, such price action should be a clear buy signal to traders. But the inherent volatility of cryptocurrency markets makes it impossible to rely on such signals. For example, XRP’s returns of 373% in May 2017 quickly slid to negative 36.1% by July. The cryptocurrency’s price during that time period fell from $0.40 per pop to a new low of $0.15 by August.

Bitcoin Returns Didn’t Live Up to the Hype

Despite its penchant for generating headlines due to its price volatility, bitcoin topped the list of maximum returns only once in July. Even then, it provided measly returns (as compared to other coins) of 15.2%. (See also: Hedge Funds Reap Spectacular Returns From Cryptocurrencies).

“As the most mature asset, you’d expect Bitcoin to be on the lower end of returns,” said Matt Hougan, vice president of research and development at Bitwise.

According to him, the reasons behind Ripple and NEO’s success are “idiosyncratic” because they were due to a combination of news developments with clever marketing and partnerships of the coins. 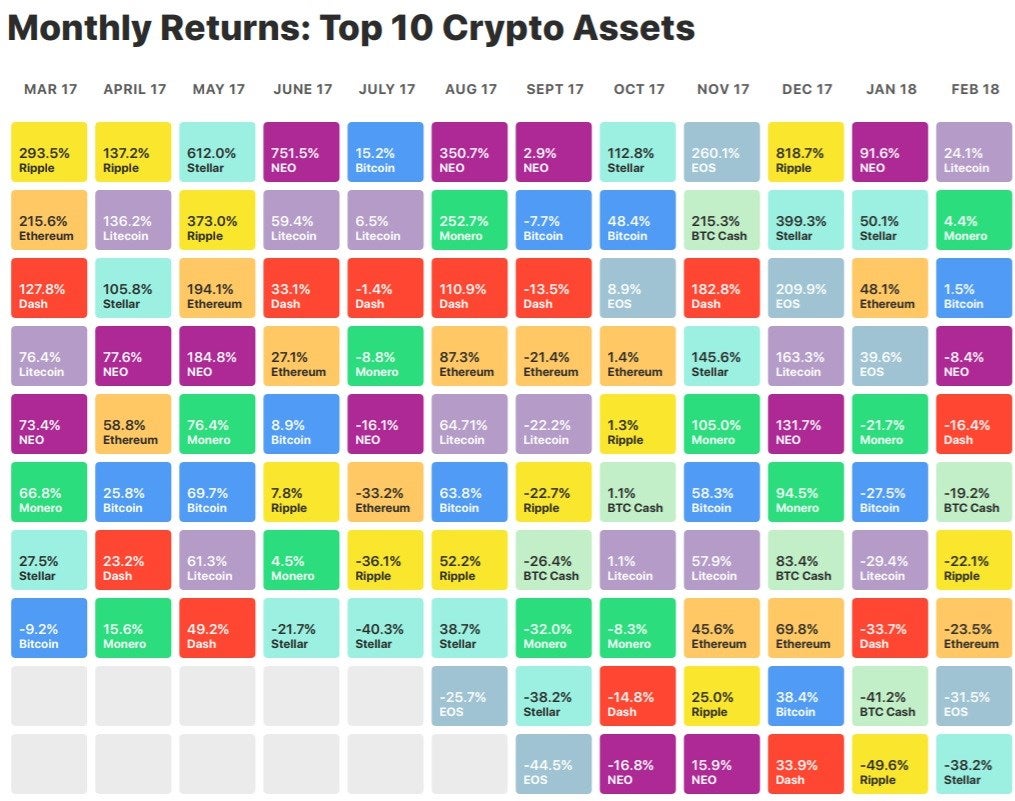 Still, the report states that there is “massive variability” in returns for the top 10 cryptocurrencies and no consistency in leadership. “The top coins in one month rarely remain the top coins in the month that follows,” the report, whose main thrust is an argument for diversification in cryptocurrency investments, states.

According to Bitwise’s Matt Hougan, there are two reasons for the wide dispersion of returns among cryptos. The first one is the inherent volatility of cryptocurrencies as compared to stocks or bonds. The second reason, according to him, is the market’s understanding of cryptoassets surpasses that of the average investors.

In recent times, there have also been reports of bitcoin’s correlation with other cryptocurrencies. Specifically, Bloomberg reported that bitcoin’s price correlation went up when cryptocurrency markets crashed and declined when they surged. But Bitwise’s report reached a different conclusion. “Viewed holistically and in light of other analyses, the correlation data strongly support the idea that the returns of individual coins are heterogeneous,” the report states.

Investing in cryptocurrencies and other Initial Coin Offerings (“ICOs”) is highly risky and speculative, and this article is not a recommendation by Investopedia or the writer to invest in cryptocurrencies or other ICOs. Since each individual’s situation is unique, a qualified professional should always be consulted before making any financial decisions. Investopedia makes no representations or warranties as to the accuracy or timeliness of the information contained herein. As of the date this article was written, the author owns 0.01 bitcoin.