Euro Pacific Capital CEO Peter Schiff has made a new statement against Bitcoin in a new tweet where he says that interest in the king coin is still very below average despite a ‘massive effort’ to push it up.

With his latest attack, Schiff tries to support his theory that the world’s largest cryptocurrency is only led by whales and price speculators.

“Bitcoin bugs insist that interest in Bitcoin is booming. Yet the facts tell a different story. Despite a massive effort to pump Bitcoin, interest is still below its 2019 peak, and not even close to the peak reached in 2017. In contrast, interest in gold is hitting new highs,” he said.

Search Interest for Bitcoin is Declining

To corroborate his idea, Schiff uses information provided by Google Trends, the website that measures the popularity of top search queries.

The chart below clearly shows that interest in Bitcoin​ is a lot below December 2017 when BTC hit its current lifetime high. As a matter of fact, it is yet to meet the June 2019 line when the hype around Facebook’s Libra crypto coin matched with BTC going up to around $14,000. 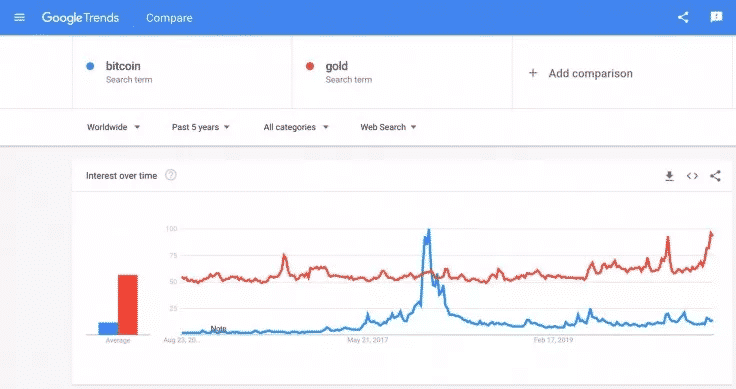 In striking contrast to this, gold is attaining new highs in terms of search interest soon after breaking above the $2,000 level for the first time.

Bitcoin is Not New Anymore

Bitcoin​ was the supreme catchword of late 2017, but all the indicators point to the fact that the king cryptocurrency is yet to win back the retail mass. The search volume for Bitcoin-related keywords went up by over 1,000 percent that year, and it also ended up being one of the most viewed pages on Wikipedia.

Although only two percent of U.S. consumers own crypto, most of them are already familiar with the term. Besides newcomers, Google searchers are now driven by analysts and researchers, but the scarcity of retail interest is the main reason behind the low levels of search queries.