Popular crypto-critic, Peter Schiff, has talked tough against Bitcoin following its nascent decline below the $30,000 belt. In what looked like a Twitter thread of vituperations mocking Bitcoin’s woes, Schiff rolled out a chronicle of comparative analysis between Bitcoin’s performance as an investment choice and that of his beloved gold. 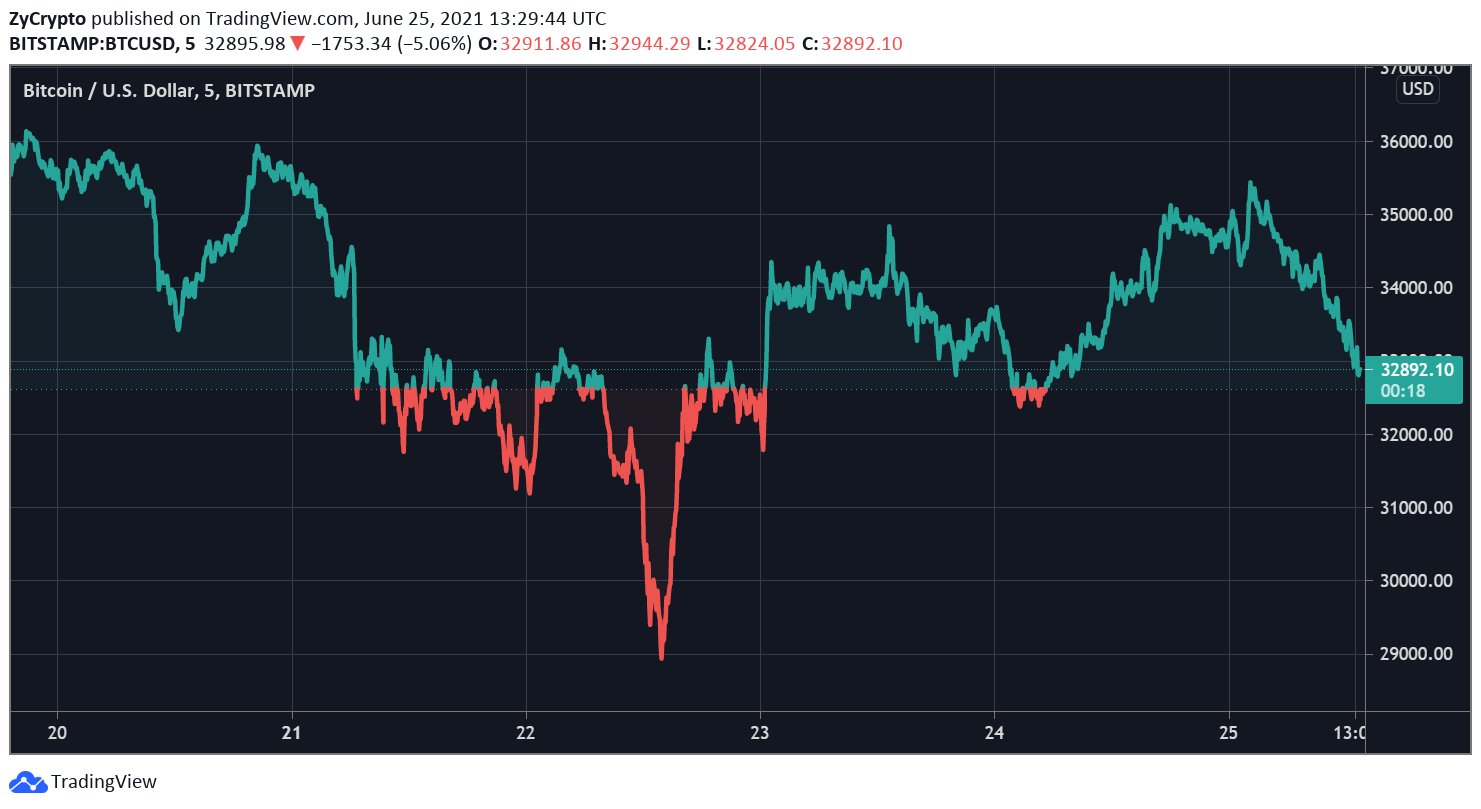 That gold has drifted only 9% away from its current year all-time high, while Bitcoin is still drawing below 50% from its on-year ATH, was all the point Schiff needed to drive home his justification for an unflinching Bitcoin-phobia.

Schiff, who last week lamented Bitcoin’s growing ‘negative’ influence on his family, went on to attack Michael Saylor’s recent BTC purchase a few days ago, labeling the act a futile attempt at inducing bitcoin bull run, since the market outcome showed an unusually negative response to such a massive whale purchase by MicroStrategy.

Schiff And The MicroStrategy Malediction

MicroStrategy appears to be Schiff’s new pet project for criticism as the Bitcoin-induced company continues its effort to diversify a significant amount of its assets into crypto investments. The company’s CEO has spent appreciable time canvassing for the adoption of bitcoin, addressing its energy concerns, and leading the ‘dip buying’ movement with an additional $489 million investment in the apex cryptocurrency.

Schiff on the other hand finds these actions quite preposterous. He adds:

“If you want to buy Bitcoin, wait until MicroStrategy sells its last satoshi.”

Peter believes Bitcoin will ultimately hit ground zero, Saylor and his company will wound down bankrupt or become forced to sell off all Bitcoin assets from his look at the current Bitcoin market trend.

Novogratz and Silbert ‘Swiped’ Too

Neither Mike Novogratz nor Barry Silbert was spared of Schiff’s attacks. The financial analyst blasted the 2021 bitcoin billionaire and CEO of Digital Currency, Barry Silbert, for failing to keep to his promise to purchase over $250 million worth to ease the stress on NAV for Grayscale Bitcoin investors. Schiff wrote:

“…So far he’s purchased less than a third of that amount. What are you waiting for Barry?”

On Novogratz, the Galaxy investment CEO, Schiff ridiculed his invitation by CNBC to help pump Bitcoin back up. He responded rather wryly to Novogratz statement that the new wave of institutional investments should prevent Bitcoin from hopelessly falling continuously with the retort:

‘….assuming some institutions were getting interested above $60k, I’m sure they’ve lost interest now.”

It is unclear the direction the market will move in the coming weeks if Schiff will have to eat all his words or Michael Saylor will have to sell all his coins. One can only pray, watch and see.

Is The Prevailing Rally A Fakeout or Real BTC Rally? Why Recent 50% Tanking Explains The Former