After months of consolidation, bitcoin has exploded higher in the last 24 hours. The bitcoin price sprinted past $39,000 in the early hours of Monday for the first time since June 16. The rebound is presumed to be a reaction to new unconfirmed reports that Amazon is readying to accept bitcoin payments by the end of this year. 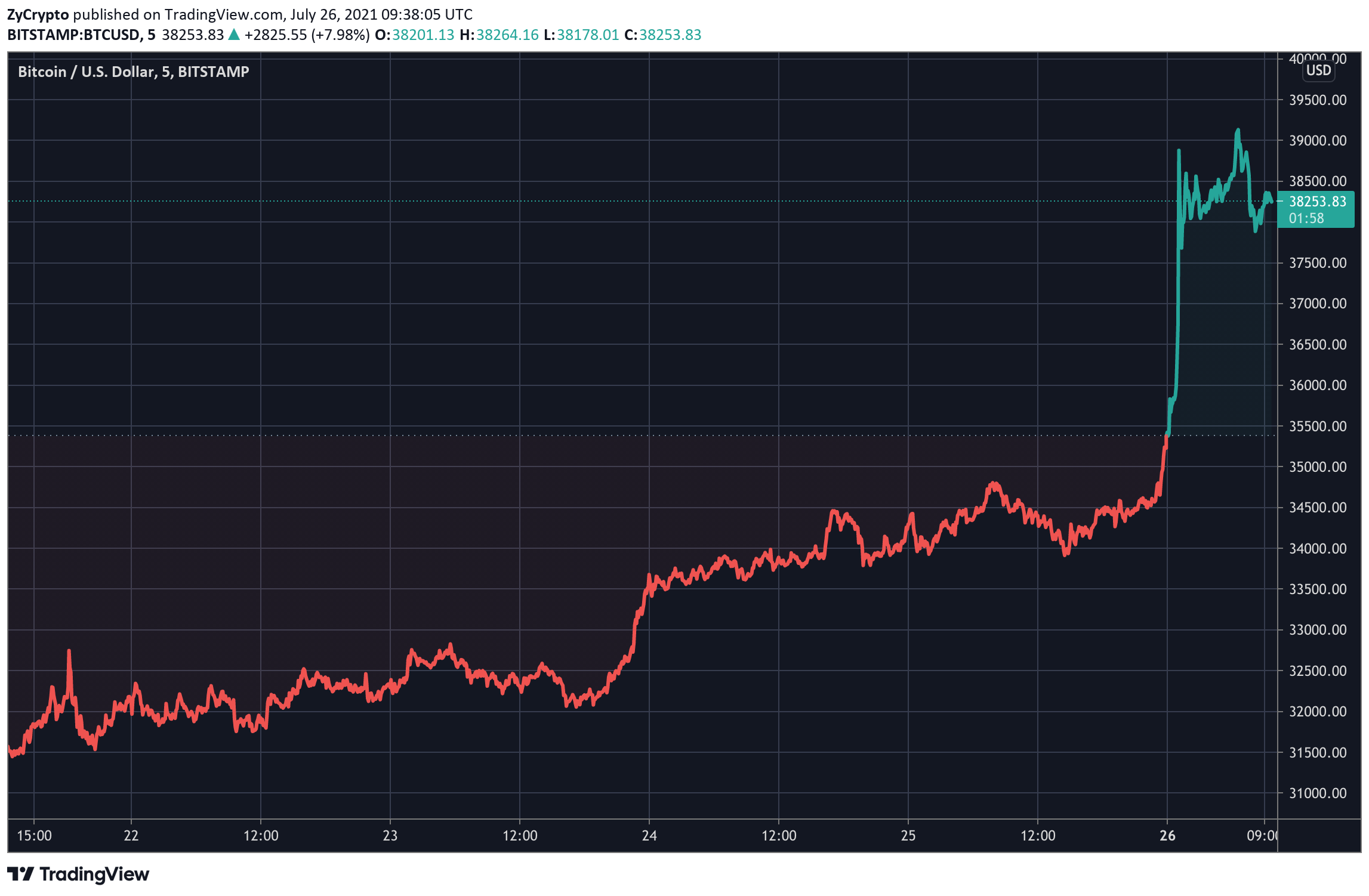 The price of the world’s oldest cryptocurrency briefly traded above $39,800 on July 26, before retracting a little. At press time, BTC is comfortably sitting on a gain of 11.25% at $38,391.62. This makes bitcoin the best performer among the top 10 cryptocurrencies by market cap.

From a technical standpoint, a “picture-perfect” short squeeze occurred as prices surged, with the bullish momentum intensifying as the price jumped from the $34K zone to over $39,000 in the span of three hours.

The sudden upswing has seen multiple indicators flashing positive signals. For instance, crypto analyst Lark Davis pointed out that the bitcoin price is now back above its 50-day moving average.

After publishing a job listing related to cryptocurrency and blockchain over the past weekend, new details about Amazon’s potential cryptocurrency project have surfaced.

On July 25, British publication City A.M. reported that the retail behemoth is “definitely” preparing to integrate bitcoin payments later this year, citing an insider familiar with the knowledge.

“This isn’t just going through the motions to set up cryptocurrency payment solutions at some point in the future – this is a full-on, well-discussed, integral part of the future mechanism of how Amazon will work,” the insider said.

The anonymous source posited that bitcoin is the first main step of this crypto adventure and the directive is coming from the top, meaning Jeff Bezos. In fact, she indicated that the project is “pretty much ready to roll”.

After bitcoin, the executives at Amazon are looking to add other top cryptocurrencies in the future.

“Ethereum, Cardano, and Bitcoin Cash will be next in line before they bring about eight of the most popular cryptocurrencies online. It won’t take long because the plans are already there, and they have been working on them since 2019.”

The source further indicated that Amazon is also looking at minting its own native cryptocurrency as early as 2022.

Though the news of Amazon accepting bitcoin for payments is still not official, the bitcoin market went berserk as it seems to be already pricing in such a possibility.